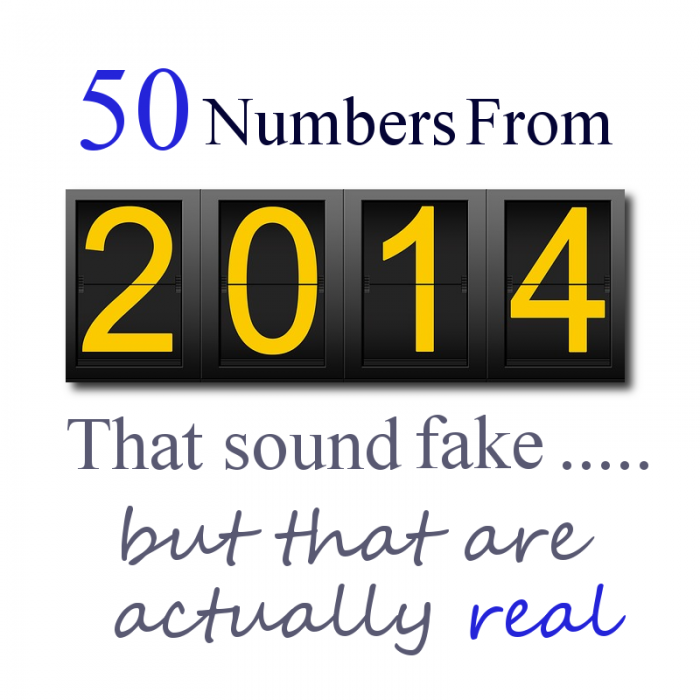 2014 was quite a bizarre year, wasn’t it? The past 12 months brought us MH370, Ebola, civil war in Ukraine, civil unrest in Ferguson, the rise of ISIS and the fall of the Democrats in the midterm elections. Our world is becoming crazier and more unstable with each passing day, and I have a feeling that things are going to accelerate greatly in 2015. But for the moment things are relatively quiet as much of the world stops to celebrate the holiday season, so now is a good time to look back and see where we have been over the past year. The facts that I am about to share with you sound false, but they are all quite true. If you doubt any of these facts, just click the link on the number to find the source. It has been said that truth is stranger than fiction, and that was definitely the case during the past 12 months. In no particular order, the following are 50 numbers from 2014 that sound fake but that are actually real…

2.5 – Researchers have discovered that characters in cartoons for children are 2.5 times more likely to die than characters in adult dramas. But as long as those characters look cute and make funny noises it must be okay.

19.8 percent – This holiday season, nearly 20 percent of all American families are on food stamps. But since the stock market is soaring, most of the rest of the country doesn’t seem to care.

$20 – If you want to “lock down that new man for Christmas”, you can buy a positive pregnancy test on Craigslist for just 20 dollars.

29.0 years – The average age when a man in America first gets married has reached an all-time high of 29.0 years. Thus the need for the fake pregnancy tests.

31.1 percent – An astounding 31.1 percent of all U.S. young adults in the 18 to 34-year-old age bracket are currently living with their parents. But the good news is that demand for tacky basement decor is at an all-time high.

33 percent – According to the Wall Street Journal, close to one-third of all Americans have a file in the FBI’s master criminal database.

34.6 percent – According to the CDC, 34.6 percent of all men in America officially meet the criteria for being obese.

36 – At this point only 36 percent of the U.S. population can name all three branches of government.

43 – The new EPA regulations issued while Barack Obama has been president are 43 times as long as the entire Bible.

45 percent – One survey discovered that 45 percent of all Americans “dread” the Christmas season.

48 percent – Only 48 percent of Americans can immediately come up with $400 in emergency cash without borrowing it or selling something.

50 – An MIT research scientist is warning that if current trends continue 50 percent of all children in America will be autistic by the year 2025.

50 percent – Half of all college graduates in America are still financially dependent on their parents when they are two years out of college.

52 percent – According to a survey that was conducted earlier this year, 52 percent of all Americans cannot even afford the house that they are currently living in right now.

54 percent – For the first time ever, more than half of all U.S. doctors support the legalization of assisted suicide.

57 percent – A recent NBC News/Wall Street Journal poll found that 57 percent of all Americans consider race relations in America to be “bad”. That is the worst number in 20 years.

59 percent – One very disturbing recent poll discovered that 59 percent of Americans are in favor of torturing our prisoners.

60 percent – In the United States today, 60 percent of all bachelor’s degrees are earned by women.

65 percent – One shocking new poll found that 65 percent of Americans believe that the government is “broken”. The shocking part of the survey was that it was only 65 percent.

65 percent – According to a Census Bureau report that was released in December, 65 percent of all children in America are living in a home that receives some form of aid from the federal government.

70 percent – Right now, about 70 percent of all government spending goes toward dependence-creating programs.

78 percent – According to a Pew Research Center study that was released earlier this year, 78 percent of U.S. women “want a spouse with a steady job”. Apparently the other 22 percent want an unemployed bum that stays home all day playing video games.

85 percent – 85 percent of all artificial Christmas trees are now made in China, and there is a rumor that Santa and his elves are considering a permanent move to the Chinese city of Shenzhen.

1979 – The United States has become the nation of the “permanent emergency”. In fact, there has been at least one “state of emergency” in effect in this country since 1979.

7,500 – The worldwide Ebola death toll has surpassed 7,500 for the first time, but most Americans seem to believe that the crisis is over. The truth is that it may just be beginning.

$30,000 – According to the Social Security Administration, 52 percent of all American workers made less than $30,000 last year.

100,000 – It is estimated that there are at least 100,000 underage sex workers in the United States. In case you were wondering, yes that means that we are a very sick nation.

$1,000,000 – We are supposed to be a government “of the people, by the people and for the people”, but at this point more than half the members of Congress are millionaires.

1,400,000 – Thanks in large part to unchecked illegal immigration, there are now 1.4 million members of criminal gangs living in our cities.

2,400,000 – There are currently more than 2.4 million people behind bars in America, and since 1980 the number of people incarcerated in our prisons has quadrupled.

2,500,000 – According to the National Center on Family Homelessness, there are now 2.5 million homeless children in the United States.

4,000,000 – Right now there are more than 4 million adult websites on the Internet, and they get more traffic than Netflix, Amazon and Twitter combined.

15,000,000 – More than 15 million Americans have cosmetic procedures done each year, and Christmas is the busiest season of the year for plastic surgeons.

30,000,000 – In America today, more than 30 million Americans are taking antidepressants. And keep in mind that antidepressants are only one class of pharmaceutical drug. Overall, nearly 70 percent of all Americans are currently on at least one prescription drug according to the Mayo Clinic.

$40,000,000 – More than 40 million dollars has been spent just on vacations for Barack Obama and his family since he has been in the White House.

49,000,000 – An astounding 49 million Americans are considered to be facing food insecurity at this point.

110,000,000 – Approximately one-third of the entire population of the United States (110 million people) currently has a sexually transmitted disease according to the Centers for Disease Control and Prevention.

$600,000,000,000 – Americans will spend more than 600 billion dollars this Christmas season. That is an amount of money greater than the entire GDP of Sweden.

$2,000,000,000,000 – The war in Iraq cost U.S. taxpayers more than 2 trillion dollars, but now a radical jihadist terror organization known as ISIS controls nearly a third of the entire country.

5,000,000,000,000 – There are now 5 trillion little pieces of plastic floating around in the oceans of the world, and lots more plastic is being dumped into our oceans every single day.

$18,031,021,541,347.52 – The current size of the U.S. national debt. It increased by more than a trillion dollars during the fiscal year that ended a few months ago, and it is on pace to approximately double during Obama’s eight years in the White House.

$40,000,000,000,000 – There are five “too big to fail” banks in the United States that each have more than 40 TRILLION dollars worth of exposure to derivatives. This is a “sword of Damocles” that could destroy our financial system and our entire economy at any time. Let’s just hope that it does not happen in 2015.

So what numbers would you add to this list?