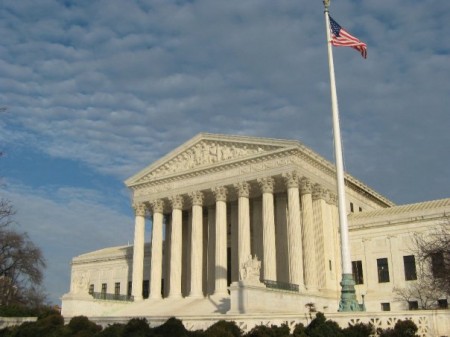 This decision by the Supreme Court on Monday came as quite a surprise to many people. The following is how USA Today summarized the short-term legal implications of this decision…

The court said Monday it would not hear appeals from five states whose same-sex marriage bans had been invalidated by lower federal courts. The decision, issued without explanation, will lead to recognition of gay marriages in 11 more states. It also allows an avalanche of legal challenges to the remaining bans to keep going forward in state and federal courts, where gay and lesbian couples have overwhelmingly prevailed.

Of course it is still possible that a federal appeals court in a conservative area of the country could decide to uphold a gay marriage ban. If that happens, that would likely send this issue back to the Supreme Court once again.

But for now, the gay community in America is rejoicing. The following is how the New York Times described the excitement of one gay couple in Utah…

When Gregory Enke heard the news on Monday morning, he woke up Ariel Ulloa, his partner of eight years, and they rushed to the second floor of a drab government building here to get married.

Mr. Enke, who was forced to leave the Mormon Church after leaving his longtime wife and living openly in a gay relationship, said it felt like vindication.

“I was in shock,” he said. “I started to shake. I was just sobbing. I didn’t want to wait anymore.”

Scenes of exultation unrolled across five states on Monday as county clerks in Indiana, Oklahoma, Utah, Virginia and Wisconsin responded almost instantly to the Supreme Court decision and same-sex couples rushed to obtain legal marriages that had long seemed like a distant mirage.

On the other side, many advocates of traditional marriage were extremely disappointed. Here is one example…

The Family Research Council, a conservative public policy and lobbying organization, said voters were having their rights infringed.

“Unfortunately, by failing to take up these marriage cases, the high court will allow rogue lower court judges who have ignored history and true legal precedent to silence the elected representatives of the people and the voice of the people themselves by overturning state provisions on marriage,” Family Research Council President Tony Perkins said.

“Do you think it should be legal or not legal for same-sex couples to marry?”

An ABC News/Washington Post poll taken at the end of May came up with similar results.

This is the question that was asked…

“Overall, do you support or oppose allowing gays and lesbians to marry legally?”

A survey conducted by Gallup back in May was a little bit closer.

This is the question that was asked for that survey…

“Do you think marriages between same-sex couples should or should not be recognized by the law as valid, with the same rights as traditional marriages?”

But what is so striking about the Gallup numbers is how far they have moved over the years.

As you can see, attitudes toward gay marriage have undergone a cataclysmic shift in this country over the past couple of decades.

At one time Americans were so overwhelmingly against gay marriage that most people just assumed that it would never be legalized in this nation.

But now Americans are so overwhelmingly in favor of gay marriage that most people just assume that it will soon be legal in all 50 states.

Is America never going back?

Should gay marriage be legal in all 50 states?

And is this a good thing or an absolutely terrible thing for our society?

2 thoughts on “America Is Never Going Back? Support For Gay Marriage Surges To Record Highs”