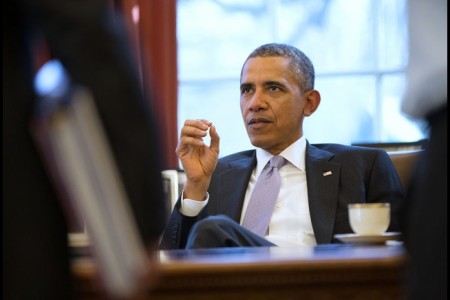 I thought the paramount job of the President of the United States was to protect its citizens. Yet we find ourselves in a position where an Ebola-infected person has purposefully and knowingly come to this country, in order to get better medical care, and in the process, exposed hundreds of US citizens to the deadly Ebola virus.

Patient Zero, who lied on his travel documents in Liberia, said he had not come into contact with anyone who was sick. Apparently, because he wasn’t throwing up and sweating profusely at the check-in counter at the airport, was allowed to board a plane from Liberia to the US, no problemo.

Then when he got word from a Texas hospital that he had Ebola, his family, including children, were told not to leave the house. But they disregarded that and the children went to school anyway. Now dozens of kids in 3 schools have to be quarantined and many are pulling their children out of school.

Law enforcement was forced to send armed guards to Patient Zero’s house to keep the family inside, as apparently, they are so SELFISH and IRRESPONSIBLE, they obviously don’t care if they start a deadly pandemic!

Yet, the POTUS doesn’t think we need any travel restrictions from the Ebola zone.

Yesterday, I called Patient-Zero, Patient-Zero-Brains because I thought he was just being stupid by getting on a plane to the US after having touched a convulsing Ebola victim who died a day later. But now I realize, he was quite clever, rather devious.

He purposely lied on the travel document and he intended to get out of Dodge (or whatever they call it in Liberia)  and into the US, so he could get better medical care. Many will say, you can’t blame him. But the bigger question is, “How many more will do the same?”

Get exposed to Ebola, lie on the travel documents and hop on a plane to the US,
where you can waltz into any emergency room and get free treatment.

Or fly to Mexico or Canada and then cross the border into the US. It’s a no-brainer for anyone exposed to Ebola with the money for a plane ticket.

I Thought It Was Hard to Catch Ebola

If it’s so difficult to catch, then why has an NBC cameraman just caught it? Surely he was aware that he shouldn’t come into contact with any bodily fluids, and I’m sure he took every precaution. Who wants to catch it?  Surely, the doctors in full Hazmat suits weren’t in direct contact with bodily fluids either, but they caught it anyway. Rush Limbaugh says in his show,

“So Dr. Nancy Snyderman and a whole NBC crew are now in voluntary quarantine for three weeks. You got a cameraman over there. These are people who know what to do to avoid getting the disease, and they still got it.  We have reports of doctors in these countries in full Hazmat gear getting the disease, and over here we’re told, “It’s hard to get.  You don’t have anything to worry about.

Now, if it turns out that this is an actual case of Ebola, and it is in the nation’s capital, then everything’s gonna change, ’cause that’s where the establishment is.  When it’s in Texas, Montana, Wyoming, it’s one thing.  When it’s in their town? Uh-oh.  I know it’s a cruel thing to think and say, but it happens to be true.  Human nature. ”

First, let’s listen to the geniuses in Washington weigh in on the calls to restrict flights from the Ebola zone:

According to the Washington Times,

“For now, the administration is rejecting calls for a visa ban for West Africans.
“I don’t believe that’s something we’re considering,”
a State Department spokeswoman told reporters.”

So they are not even CONSIDERING it. Like a parent telling their kid – “Don’t ask me that again, it’s out of the question.” I wonder when they WILL consider it? When we are in a full pandemic mode and the President is even scared to go on his hand-shaking fund-raisers, I’m guessing.

“Health officials have described the Texas case, in which Patient Zero, Mr. Duncan exhibited symptoms but was released from a hospital for two days, as a fluke misstep.”

A MISSTEP? Are you kidding me? We can’t afford any MISSTEPS! How many people will have to die before the POS in Washington decides it’s time to institute travel restrictions? Even a DEMOCRAT (unbelievable, right?) called for a travel ban months ago:

“Calls for a travel ban extend back to the summer, when the disease first started to spread in Liberia, Sierra Leone and Guinea. Rep. Alan Grayson, Florida Democrat, was one of the earliest to propose restrictions, calling for a 90-day ban on travel from Ebola-touched countries to the U.S.

“If they’d instituted the travel ban when Alan Grayson, of all people, demanded it, [Duncan] wouldn’t be here,” said Mark Krikorian, executive director of the Center for Immigration Studies, who said a ban could have prevented the scrambling health officials are now doing to try to track Mr. Duncan’s movements and see whom he might have infected.”

US Hospitals, Doctors and Nurses are Not Prepared to Deal with an Ebola Outbreak
That was proved when the first case was bungled.

In the US there are 4 units geared up to handle Ebola. The National Institutes of Health (NIH) Clinical Center, Bethesda, Maryland, has 3 beds. Nebraska Medical Center, Omaha, has 10 beds. Emory Hospital, Atlanta has 3 beds and St Patricks Hospital, Missoula  has 3 beds.

“Local hospitals, in my opinion, can take care of the problem currently but if a pandemic occurs, the national answer is no.”

Is Ebola an Airborne Virus?

Centers for Disease Control Director Tom Frieden said that…” in theory, a sneeze or cough could spread the virus from someone experiencing Ebola symptoms.”

Officials had previously downplayed this possibility, focusing on direct contact with bodily fluids.

“There are certainly theoretical situations where someone sneezes … and you touch your eyes or mouth or nose,” and catch the virus from any transmitted particles, he said.   “[But] realistically you can say what may be theoretically possible as opposed to what actually happens in the real world,” he added.

Ok, that’s confusing. Sounds like it’s theoretically “airborne”, which means to me – it’s airborne!  What he described as being theoretical was just the definition of airborne, which means that it could also be transmitted whenever an infected person coughs, sneezes, talks, or exhales. This would explain how the recent NBC camera man and other doctors in full Hazmat suits contracted Ebola.

I’m sure the NBC camera man wasn’t exchanging bodily fluids with the locals, being there to report on Ebola. It doesn’t make any sense as to how he caught it, unless it is in fact OR in theory- airborne.

Does Anyone Give a Damn About the American People Anymore?

It all makes perfect sense, when you think about it. This administration likes, grants special rights and privileges to, gives money to, praises, grants special favors to – anyone else in this world, EXCEPT the citizens of the USA.  Americans that are not political ass-kissers of his, that is.

Case in point: The President exchanged 5 high-level terrorists for 1 military traitor-deserter Bergdahl.  And put him back to work at a desk job in the military, no questions asked. A win-win for all the wrong people. Yet Sargeant Tahmooressi, an HONORABLE military young man who fought bravely in Afghanistan, has been languishing in a Mexican jail, unlawfully, for 6 months.

Yet the POTUS hasn’t EVEN ASKED the President of Mexico to cut him some slack. Not even when the two presidents were talking on the phone, did our POS even MENTION Tahmooressi. That’s just ONE case of many.

I presume the same will apply to Ebola victims from Africa. They will be greeted with open arms, granted acceptance, love, money and care in the US, at the expense of the lives of the rest of us, who will be exposed to the deadly Ebola virus and its horrific ramifications. And on an economic note, if Ebola even starts to spread, never mind a full out pandemic, the economy will go down the tubes as well,  while basic essentials at the store disappear.