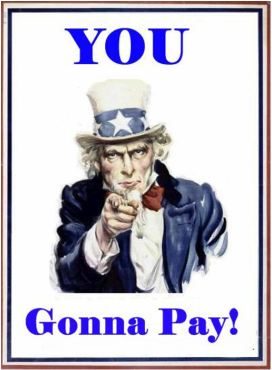 Apparently the midterms didn’t work after all. The voters wanted Congress to stop Obamacare, immigration and excessive spending with the power of the purse, held by Congress.

Yet Saturday night they passed the trillion dollar Cromnibus bill that funds the government until September 2015 and includes language that allows the banks to again be bailed out!

“Even though millions of voters rose up just one month ago to protest how President Obama and the Senate Democrats were running Washington, business as usual is continuing inside the marble halls of the United State Congress,” Ted Cruz said to Raw Story.

We the people, were sold down the river AGAIN. In a shockingly blatant slap in the face, Congress has aligned itself with Wall Street and put the taxpayers on the hook for trillion of dollars banks use to gamble – derivatives.

Bank Bail Outs are Back!
Taxpayers will have to bail out banks if they lose $303 Trillion Dollars in Derivatives.

“Nothing will ever change, until what little is left of America’s middle class realizes just how corrupt the American system of government has become, and changes it. Violently.
“With $303 trillion derivatives it has just been saddled with, it is now far too late.”

ZeroHedgereports, “What is most insulting is how cheaply Wall Street’s Congressional marionettes will betray their constituents.

Finally, as long as Wall Street is allowed to purchase votes and peddle influence for what amounts to pennies on any given bank’s quarterly EPS number, nothing will ever change, until what little is left of America’s middle class realizes just how corrupt the American system of government has become, and changes it. Violently. Unfortunately, with $303 trillion derivatives it has just been saddled with, it is now far too late.”

Earlier this month, it was revealed that the banks now have the power to confiscate depositors’ money in times of financial crisis. And not just money that’s over the FDIC limit, but everything you have in the bank, as the FDIC is woefullyunderfunded to cover depositors’ losses of any amount.

4 US Banks Hold the Most in Derivatives

The 4 Banks with the Biggest Derivatives Exposure

These are the most dangerous banks that will be the first to fall, and the first to claim their depositors’ money:

The reality is that both parties are equally guilty of aiding and abbeting the robbery of the middle class by Wall Street and its “privately-owned” Federal Reserve.

Sarah Palin comments on the bill, “It stinks to high heaven. Did arrogant politicians not get the memo that Obama’s agenda was decisively defeated in last month’s historic midterm landslide? Good Lord, America said loud and clear not just “no” but “hell no” to Obama’s failed policies. Americans who pay attention said absolutely no to Obama’s amnesty for illegal aliens.

We also said no to the mother-of-all unfunded mandates, Obamacare, and voters believed promises that they would ratchet down the $18 trillion debt. Well, our bad for apathetically trusting politicians. No, on second thought, it’s not “our bad.” Some of us warned and worked hard to elect candidates who would buck the status quo.

Many conscientious Americans did all they could to open the eyes of low-information voters. It was tough going up against Obama’s lapdogs in the media and the power liberals have to play their politics of personal destruction against commonsense conservatives.

But really how out-of-touch do these politicians have to be to misunderstand our recent mandate to stop Barack Obama’s fundamental transformation of the greatest nation on earth?”

It was “only” 162 republicans who voted for the Cromnibus – some 67 voted against. Which means that the 57 democrats who also voted for the Bill to get the crucial 218 passing votes was far more critical.

Among those voting against the unpopular spending bill were 67 Republicans, including conservative favorites like Reps. Trey Gowdy (R-S.C.), Louie Gohmert (R-Texas) and Dave Brat (R-Va.)

The 67 Republicans Who Voted NO for Cromnibus Bill

So there it is folks. During the next financial crash, and there will be one in the next year or two – tops, the banks can take all of your money deposited in the bank. On top of that, bail-outs from the government (taxpayer money) to the tune of $303 trillion dollars, are on the table. Simply put, we’re TOTALLY screwed.
Article authored by Carol Serpa. You can find the original story right here.

1 thought on “Bank Bail-Outs are Back! Cromnibus Bill Puts Taxpayers on Hook for $303 Trillion Dollars. See the 4 Most Risky Banks”