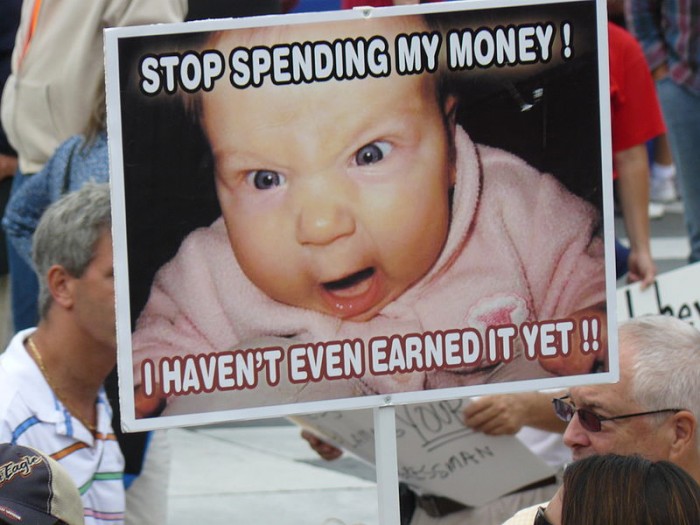 When it comes to taking a chainsaw to the future of America, nobody seems more eager than Barack Obama. Despite the fact that the U.S. national debt is on pace to approximately double during his eight years in the White House, he has just proposed a budget that would take government spending to crazy new heights. When Barack Obama took the oath of office, the U.S. national debt was 10.6 trillion dollars. Today, it has surpassed the 18 trillion dollar mark. And even though we are being told that “deficits are going down”, the truth is that the U.S. national debt increased by more than a trillion dollars in fiscal 2014. But that isn’t good enough for Obama. He says that we need to come out of this period of “mindless austerity” and steal money from our children and our grandchildren even faster. In addition, Obama wants to raise taxes again. His budget calls for 2 trillion dollars in tax increases over the next decade. He always touts these tax increases as “tax hikes on the rich”, but somehow they almost always seem to end up hitting the middle class too. But whether or not Congress ever adopts Obama’s new budget is not really the issue. The reality of the matter is that the “tax and spend Democrats” and the “tax and spend Republicans” are both responsible for getting us into this mess. Future generations of Americans are already facing the largest mountain of debt in the history of the planet, and both parties want to make this mountain of debt even higher. The only disagreement is about how fast it should happen. It is a national disgrace, but most Americans have come to accept this as “normal”. If our children and our grandchildren get the opportunity, they will curse us for what we have done to them.

If our national debt was reduced to a stack of one dollar bills, it would circle our planet at the equator 45 times.

How could we have done such a thing?

Thomas Jefferson once said that “the principle of spending money to be paid by posterity, under the name of funding, is but swindling futurity on a large scale.” He correctly understood that government debt is stealing. We are financially raping our children, our grandchildren and all future generations of Americans. It is an incredibly wicked thing to do.

But instead of men like Thomas Jefferson running our country, we have men like Barack Obama running it.

And to Barack Obama, running up a trillion dollars of debt a year is “mindless austerity”…

“I want to work with Congress to replace mindless austerity with smart investments that strengthen America,” Obama said in a speech at the Department of Homeland Security. “I’m not going to accept a budget that locks in sequestration going forward. It would be bad for our security, and bad for our growth.”

Yes, if we steal money from future generations it will artificially inflate our current standard of living and make our economy look temporarily better than it should be.

But it is morally wrong to do this, and our current crop of politicians have no intentions of ever bringing the debt party to an end.

Even with the ridiculously optimistic economic assumptions that are used in Obama’s new budget, the federal budget is never projected to balance within the next decade. Instead, Obama’s budget projects that the national debt will rise from 18.1 trillion dollars right now to 26.2 trillion dollars in 2025.

Of course it would greatly help if the federal government actually spent our money wisely. But instead, the feds often waste our hard-earned tax dollars in some of the most bizarre ways imaginable. The following is just one example…

Thanks to this kind of insane spending, our debt is completely and totally out of control.

While Barack Obama has been in the White House, the U.S. national debt has increased by $84,266 per full-time private sector worker. Anyone that believes that this kind of debt accumulation is sustainable is absolutely delusional.

The only reason why our house of cards has not completely collapsed already is because the rest of the world has been willing to lend us gigantic piles of money at artificially low interest rates.

And the issue isn’t just the more than one trillion dollars in new debt that we are accumulating every 12 months.

If something were to happen which would cause the rest of the planet to either be unwilling or unable to lend us trillions of dollars at ridiculously low interest rates all of a sudden, the game would be over.

We were handed the keys to the greatest and most prosperous economy in the history of the planet, and our greed has totally wrecked it.

We were wealthy beyond imagination, but that was never good enough for us. We always had to have more.

And now we are hurtling toward financial oblivion, and we have a man in the White House that wants us to go into debt even faster.