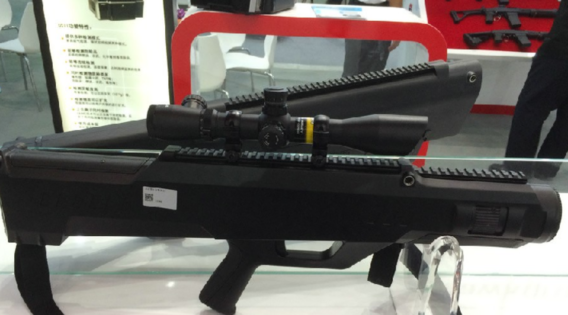 The newest Chinese rifle invention is not only laser-powered, but it can literally set a human being on fire.  Oh, but don’t worry too much; the Chinese government promises it’s not lethal.

If you tick off the Chinese government, they just might send soldiers armed with “non-lethal” laser-powered rifles that will set you to fire to correct your behavior.   According to South China Morning Post, the new high-tech weapon is dubbed the ZKZM-500 and the “laser assault rifle” has similar dimensions to that of the AK-47. The weapon allegedly weighs about 3 kilograms (6.6lbs) with a “caliber of 15 millimeters” and it is powered by rechargeable lithium batteries that allow for 1,000 “zaps” that last 2 seconds long each.

From 800 meters (about half a mile) away or less, the rifle can burn through a target’s clothes and skin and, if their clothes are flammable, set them on fire, according to reporting done by The South China Morning Post. ZKZM-500 is reportedly now ready for mass production and to be used by China’s military and police only (not a big surprise there since we all know that the slaves don’t get any form of protection against the ruling class). But maker ZKZM Laser hasn’t found a licensed partner yet. so it may be some time still before the Chinese police and military start setting those who irritate them by living freely on fire. (SHTFPlan.com)