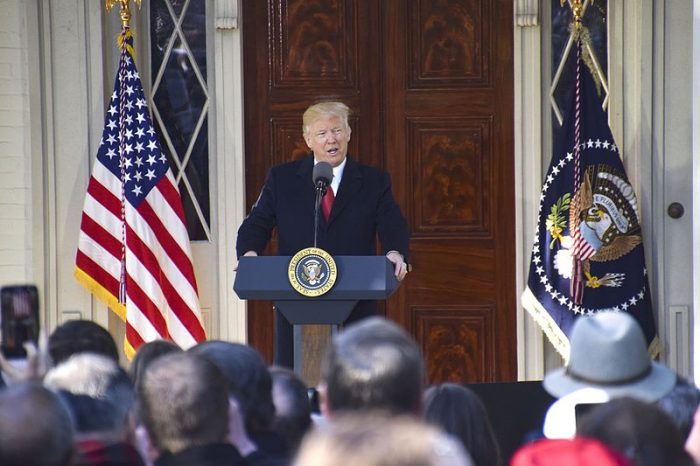 Rumors of war are percolating in Washington D.C., and if the Trump administration is not extremely careful it may find itself fighting several disastrous wars simultaneously. Just one day after threatening North Korea with war, Donald Trump has committed to taking military action against the Assad regime in Syria. Trump is blaming the chemical attack in Syria’s Idlib province on Tuesday on the Syrian government, and he is pledging that the United States will not just sit by and do nothing in response. Unfortunately for all of us, military contingents from Russia, Iran and Hezbollah are mixed in among the Syrian forces, and so any strike on the Syrian military could potentially spark World War 3.

In this article, I am going to share with you several quotes from President Trump and members of his team over the past couple of days, and if you read them carefully you will see that Trump has clearly painted himself into a corner.

This first quote comes from CNN, and it is a portion of Trump’s response when he was asked about the chemical attack in Syria by a reporter…

“It crossed a lot of lines for me. When you kill innocent children, innocent babies … with a chemical gas that is so lethal that people were shocked to hear what gas it was, that crosses many, many lines — beyond a red line.“

Trump has very harshly criticized Barack Obama in the past for doing nothing in Syria once Obama’s “red line” was crossed, and so for Trump to use the exact same phrase is very meaningful. And in his remarks about this new chemical attack, Trump once again pointed the finger at Obama for making “a blank threat”…

“I think the Obama administration had a great opportunity to solve this crisis a long time ago when he said the red line in the sand,” Trump said. “And when he didn’t cross that line after making the threat, I think that set us back a long ways not only in Syria, but in many other parts of the world, because it was a blank threat.”

But now that Trump has also accused Syria of crossing “a red line”, the only way that Trump can avoid the same kind of criticism that he was casting at Obama is to take military action.

Today’s chemical attack in Syria against innocent people, including women and children, is reprehensible and cannot be ignored by the civilized world. These heinous actions by the Bashar al-Assad regime are a consequence of the past administration’s weakness and irresolution. President Obama said in 2012 that he would establish a “red line” against the use of chemical weapons and then did nothing. The United States stands with our allies across the globe to condemn this intolerable act.

“When the UN consistently fails in its duty to act collectively, there are times in the life of states that we are compelled to take our own action,” she said.

Of course the UN Security Council is not going to condemn Syria, because Russia would veto any such resolution.

So the Trump administration is going to be faced with a choice.

Either they will back up their words and take military action in Syria (which would be totally disastrous), or they will be accused of making threats that turned out to be completely empty just like Obama did.

A much wiser approach would have been for the Trump administration to say that they were going to study this attack to determine who was behind it before pledging to take any action. Because the truth is that previous “chemical attacks” that were blamed on the Assad regime have turned out to be false flags that were designed to draw the western powers into the war…

The U.N. thoroughly investigated the first 2013 attack. The U.N Commission of Inquiry’s Carla Del Ponte ultimately said the evidence indicated the attack was carried out by the Syrian rebels — not the Syrian government. Despite this, support for the Syrian rebels from the U.S. and its allies only increased, raising serious questions about Obama’s sincerity when condemning chemical attacks.

Pulitzer-Prize winning journalist Seymour Hersh found the second major attack was committed in a similar manner. Hersh found that the U.S. quite deliberately attempted to frame the evidence to justify a strike on Assad without even considering al-Nusra, a terror group with access to nerve agents that should have been a prime suspect.

And I have a feeling that this new attack is another false flag, because it wouldn’t make any sense for the Assad regime to use chemical weapons at this point. Thanks to the assistance of Russia, Iran and Hezbollah, the Assad regime is winning the civil war, and the only thing that could possibly turn the tide now would be military intervention by the United States.

So if Assad did actually use chemical weapons against a bunch of defenseless citizens on Tuesday, it would have been the stupidest strategic move that he possibly could have made.

In any controversy such as this, you always want to ask one key question: Who benefits?

Of course the answer to that question in this case is exceedingly clear. The radical Islamic rebels that are being backed by Saudi Arabia and Turkey will greatly benefit if they are able to draw the western powers into the war on their side.

But what would the U.S. have to gain by getting involved in such a war?

ISIS is almost totally defeated in Syria thanks to Russia, and most of the country has already been reduced to rubble at this point. But if we did get involved a lot of Americans could end up dead, and as I will discuss in Part II of this series, there is a very real possibility that we could end up in a military conflict with Russia, Iran and Hezbollah.

Back in 2013, a much wiser Donald Trump tweeted the following…

AGAIN, TO OUR VERY FOOLISH LEADER, DO NOT ATTACK SYRIA – IF YOU DO MANY VERY BAD THINGS WILL HAPPEN & FROM THAT FIGHT THE U.S. GETS NOTHING!

I could not have summed it up better myself.

Hopefully Donald Trump will take his own advice and will keep us out of a war that would be absolutely disastrous for our nation.