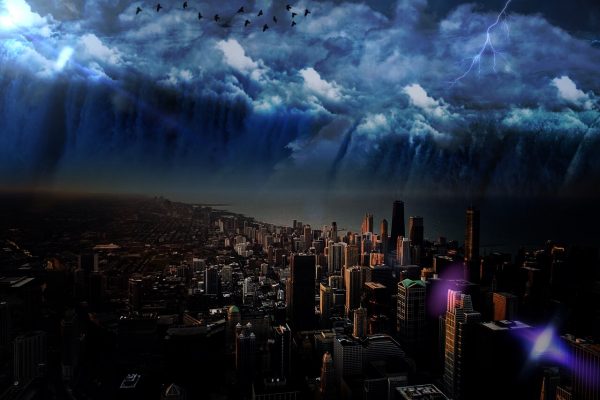 All the way back in 1973, Dr. Roxanne Brant was shown the horrific economic collapse that will sweep across America in the last days.  She was also shown the massive east coast tsunami that is coming and the utter devastation that this will cause in the state of Florida.  If you are not familiar with Dr. Roxanne Brant, here is a short bio…

Dr. Roxanne Brant (1943–1986), founder of the Northern Florida Christian Center in O’Brien, Florida, conducted miracle services and crusades throughout the United States, Canada, and other parts of the world. She studied at Harvard Divinity School, Boston University School of Theology, and Gordon Divinity, earning B.A., M.Div., Th.D, and D.D. degrees. Dr. Brant died in 1986, leaving a ministry that continues to carry on her work in spreading the gospel message of God’s love and healing through Christ.

And even though she only lived for 43 years, she sure squeezed a lot into those years.

(UBM) God has given me two visions in the past eight years that have changed my life and ministry. In these two visions, He has shown me events to come that will affect the lives of every man, woman and child in this nation, as well as throughout the world.

Jesus said to me, “…My people need to be informed and prepared for the difficult times ahead,…I want My people to not only be informed, but to seriously and diligently devote themselves to the building up their faith and to seeking My guidance in every detail of their lives,… Some of the things which I have shown you have already come to pass, and it has taken some time for even these things to occur. In the same manner, the rest of the vision will come to pass, but it will take time for it to occur. I will bring all of the things which I have shown you to pass in THIS generation. … By My Spirit, I have shown you things to come that My people might be prepared. I want My people to be one step ahead of everything that will occur. … Tell My people that I will provide protection in danger, food in famine and faith in persecution. I will be true to My words and My Covenant with them. I will keep them in the coming difficult times and My hand shall be upon them in special ways, but they must do their part to seek Me and to cooperate with My Spirit by diligently nourishing themselves with My Word, building up their faith and seeking My guidance in every detail of their lives”.

The first vision came in Oct. ’72, giving 14 months for 4 judgments. This has been fulfilled. The second vision came in Sept. ’73, regarding which Roxanne says in My Vision:

“…About two weeks prior to the vision, God, moving in a very miraculous and powerful way, had commanded me to buy several acres of land in northern Florida. I went ahead and bought the land, but because I was so amazed at the strength and power behind His command, I asked Him, ‘Lord, why is that land so important to You? Why would You make us move from beautiful Naples up to the northern part of Florida?” He answered me more fully and powerfully than I could have anticipated–in a vision form.

Late one afternoon in early September I was relaxing after a hard day’s work, thinking about business details, when the Holy Spirit came upon me and opened my eyes to see what was to come in these next few years. First, I saw a very clear picture of Florida. The southern two-thirds of the state was baked dry in the sun and in a state of severe drought. But I saw clouds filled with rain move down and gently drop their moisture over the northeast corner of Florida, exactly in the location where I had bought the land. Then, I sensed that something awesome was about to happen to the southern half of Florida, and as I shifted my gaze southward, the most eerie and incredible thing I have ever witnessed then occurred. The ocean, like a giant monster rose silently and calmly and began to move across the land. It moved miles inland, flooding everything in its path. Later when it moved back, the drought continued and the sun baked the ocean salt into the land. I knew the area where I bought land in northern Florida would be protected and watered by God, and certain areas where God led other Christians to buy land and farm would also be protected. But most of the country and world would be under the supernatural siege of God with ever increasing and worsening droughts, flooding, earthquakes, storms, tornadoes, hurricanes, pestilence, etc. I knew that because of these natural judgments of God that many crops would fail and millions of people in different places of the United States and the world would be starving. It is not a pretty picture and is therefore very difficult for me to talk about, but I saw millions of people starving and trying to find edible roots and grasses to eat. I saw presidents of corporations reduced to nothing except their homes and the food in their cupboards. One man was trying to warm watery soup for his family on a fire in his backyard.

It seemed to me that many houses were very dark and cold which would signify that somehow there was a shortage of electricity and heat. Money was not much more valuable than paper. The only things worth having were land, food, seed, wood for fuel, a home that was not mortgaged, farming tools and machinery, and certain everyday products which were no longer available. Many people simply left their jobs and tried to grow enough food to live on. Many of our largest and most trusted corporations went bankrupt. Many valuable machines were setting idle because they lacked the one necessary part to fix them. Many people who were living beyond their means and who had mortgages on their homes were turned out into the streets. Insolvable problems presented themselves in every area, in politics, as well as economics and weather. There were so many quick changes, that by the time we had heard of one change, another change had already occurred. The church became heavily taxed and many of its activities were curbed by the government. Much persecution broke out against Christians who preached the gospel and witnessed. But in the midst of all these calamities, the (true) church of Jesus Christ waxed valiant and became stronger than ever…millions were swept into the kingdom.

So, in short, it would be good to begin to set our houses in order and prepare ourselves inwardly for His coming, and outwardly for the events that are coming. None of these will come upon us suddenly, but we can see the beginnings of everything I have mentioned already. These problems will just increase and cause some people to begin to seek God, for they will realize there is no other answer…

Whatever you do, DON’T RUN AHEAD OF GOD! Just use this as an incentive to spend more time with Him, praying and reading your Bible, and waiting upon Him so that HE CAN SPEAK TO YOU…