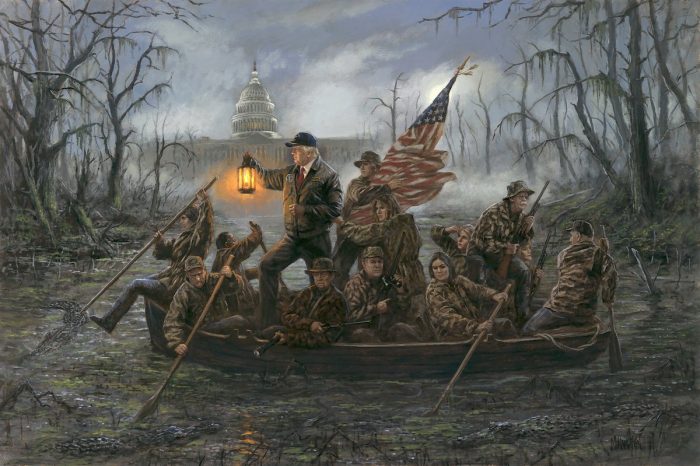 (Daily Sheeple) This painting of president Donald Trump and his team traversing the swamp is igniting a social media firestorm. Utah-based artist Jon McNaughton shared his painting aptly titled “Crossing the Swamp,” Tuesday on Twitter, and the reactions have been mixed.

The painting is a clever spin on the classic [George] “Washington Crossing the Delaware,” only it replaces George Washington’s crew with members of the Trump administration. Sarah Huckabee Sanders, Trump’s White House press secretary, can be seen rowing the boat. John Bolton is holding a gun, which appears appropriate considering he’s infamous for being a warmonger.

My new painting – “Crossing the Swamp”
“Never give up. Never lower your light.
Never stop till the swamp is dry.” – Jon McNaughton
For a list of figures in the boat: https://t.co/ZIPdkBgcFU pic.twitter.com/CTPndvK5LM

But some don’t think the painting is as patriotic as others depict and the jokes have already begun.

“Trump endeavors to cross the ‘swamp’ of Washington DC as he carries the light of truth, hope, and prosperity. The murky water of the deep state is laced with dangerous vermin, perfectly willing to destroy American prosperity for their personal ideologies and financial gain,” McNaughton said of his latest painting on his website. McNaughton also wrote that he hopes people will “study the paintings and try to understand the deeper meaning.”

But most don’t care, they only want jokes, and Twitter is evidence of such.

McNaughton is a supporter of president Trump’s, according to Fox News, citing the hashtagging of “MAGA” on his Twitter bio.