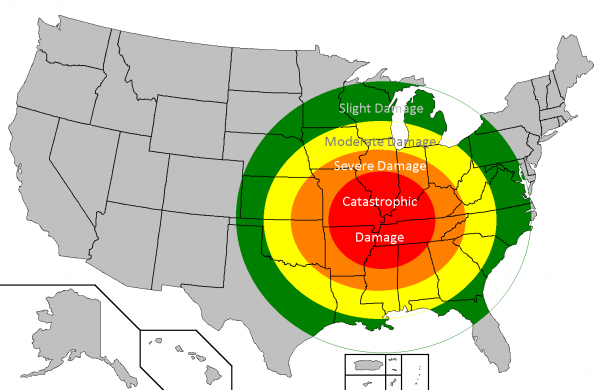 So many people have been shown the great earthquake that is eventually going to rip North America in half along the New Madrid fault.

A few days ago, a wonderful woman named Donna Hazlett sent me a vision that God gave to her last year.  In this vision, she was shown a highway that will instantly be submerged by water once this massive earthquake hits.

The good news is that this event will not happen immediately because so many others have been shown that it only happens after the U.S. government is involved in formally dividing the land of Israel.

But the bad news is that this event is coming someday, and what Donna was shown is perfectly consistent with what countless others have been shown…

Hi Michael,
Last year, I had a vision during the day. I was wide awake and all of a sudden I was transported and was standing next to a man and I had peace with him. I don’t know who it was or if he was an angel. But I had perfect peace with him and knew I was safe. I felt calm standing next to him. Where we were standing, in front of us there was black asphalt like a small parking lot, but there weren’t any painted markings where cars would park, but it was an area of black asphalt and beyond that there were trees and hills. It was daytime. We stood and looked ahead. Then it was as if the earth began to wobble on it’s axis. Those were the exact words that came to my mind as it happened. In your book, someone described it as the ground rolling up and down. That’s how it looked. But underneath my feet, it felt as though the earth was wobbling on it’s axis. Then he showed me a highway with cars driving on it. It was still daylight and the highway was dry. One moment the cars were driving along like normal and the next moment they were completely engulfed underwater. It was all under water. The highway was suddenly under water. The cars were turning over underneath the water. I didn’t know for sure where this was at the time so I emailed a Pastor in Florida, because of the highways going under the water. I ordered your book and it arrived yesterday, August 24th. As I was reading the prophecies last night, I realized that it was my area that was being shown to me. I am minutes from the Mississippi River and the bridge to St. Louis. Our country was split in two and that’s why the water gushed over the cars and highway, the highway sank under the water. It was St. Louis sinking. Like it was swallowed up in the water. Our country was split in half and divided by the water.

Michael, I don’t know if this had anything to do with it, but it was shortly after that vision there were three separate times where Jesus was face-to-face with me and told me to stand. It happened three different times after that vision. I told that same Pastor about it in an email. I don’t know if it’s connected though. I’m going to finish reading your book and if there’s anything else I remember or the Lord speaks to me I will send it to you in an email. Thank you.

I can still see it all, even as I looked down at the ground, before the earth started to wobble, I can remember the little pebbles around our feet. Little rocks on the edge of the asphalt where we stood.

As soon as I hit send on that last email I felt convicted by the Lord about when I asked if you thought we would be raptured first. I know today has enough trouble of its own and we’re not supposed to worry. Like Jesus said, “Take no thought for tomorrow…” Matthew 6:34. I know God will never leave us or forsake us. I have peace about it.