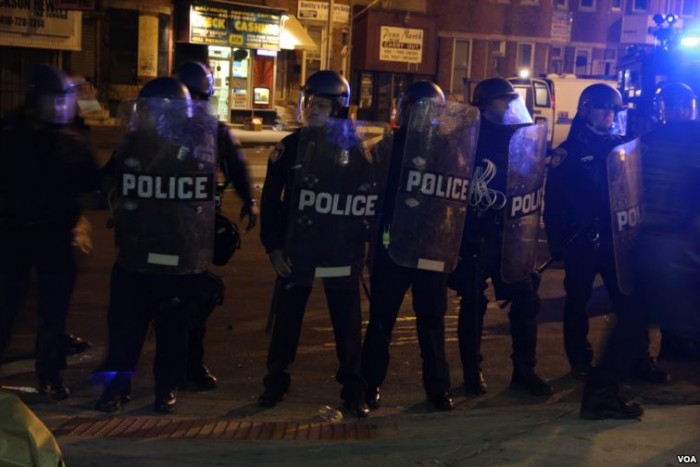 We now have official confirmation that the rioting in Baltimore on Monday was purposely allowed to spiral out of control. Up until now, there had been some unconfirmed reports that police in Baltimore had been ordered to “stand down” during the riots, but nobody had been willing to come forward and go on the record. Now that has all changed. Michael Lewis is the Sheriff of Wicomico County, Maryland and what he has to say is absolutely jaw dropping. When he saw what was happening in Baltimore, he gathered up some of his fellow officers and drove down to the city to help. But when he got there, he says that all of the police were being ordered not to take any action and to let the rioters destroy property. Lewis made this astounding claim during a discussion on a Baltimore radio station…

A Maryland sheriff who traveled to Baltimore to help law enforcement stop Monday’s riots told 105.7 The Fan that he was stunned when officers alerted him of the orders to stand down.

Lewis says that he never heard the mayor give any particular orders, but he is very clear about the fact that the police were being instructed to “stand down” and to “let them destroy property“….

“I was sick to my stomach like everybody else. … This was urban warfare, no question about it. They were coming in absolutely beaten down. The [city officers] got out of their vehicles, thanked us profusely for being there, apologized to us for having to be there. They said we could have handled this, we were very capable of handling this, but we were told to stand down, repeatedly told to stand down,” he said. “I had never heard that order come from anyone — we went right out to our posts as soon as we got there, so I never heard the mayor say that. But repeatedly these guys, and there were many high-ranking officials from the Baltimore City Police Department … and these guys told me they were essentially neutered from the start. They were spayed from the start. They were told to stand down, you will not take any action, let them destroy property. I couldn’t believe it, I’m a 31-year veteran of law enforcement. … I had never heard anything like this before in my life and these guys obviously aren’t gonna speak out and the more I thought about this, … I had to say a few things. I apologize if I’ve upset people, but I believe in saying it like it is.”

“This is coming from a very senior law enforcement official with direct knowledge of the orders that were given by the mayor and by her police commanders, down to the very core of the police riot units,” Vittert said on “Your World with Neil Cavuto” Wednesday afternoon. “What I am quoting now from him is, quoting the mayor, ‘Let them loot, it’s only property.’”

If this is true, this is not just a minor scandal. If what these law enforcement officers are saying is accurate, this is a scandal of monumental proportions.

And could it be possible that the scandal goes even higher? Did Rawlings-Blake speak to anyone before making this decision? Could the Obama administration be involved somehow?

In a previous article entitled “12 Unanswered Questions About The Baltimore Riots That They Don’t Want Us To Ask“, I noted that Rawlings-Blake has very close ties to the Obama administration. Could it be possible that Rawlings-Blake was told to order the police to stand down by someone in the White House?

What we do know at this point is that after public schools were let out on Monday afternoon, high school kids were forced to get off of buses and herded into the Mondawmin mall area where the “purge” that had been hyped on social media was supposed to take place.

We also know that police dressed in full riot gear were waiting for them.

But then once the rioting started, the police pulled back and let it rage wildly out of control.

This all seems very orchestrated to me.

And were they specifically ordered to not even defend their own police vehicles? On Monday afternoon, there were lots of police vehicles conveniently parked along the streets right in the middle of the riot zones. But the police officers that those vehicles belonged to were nowhere to be seen. So why didn’t the police protect their own vehicles? This all seems very strange.

Dramatic images of police vehicles being smashed and burning wildly have now been seen by hundreds of millions of people all over the planet, and those images send a very powerful message.

Of course the biggest victims in all of this are the impoverished African-American communities where the worst of the rioting took place. The police were ordered to stand down while these African-American neighborhoods were vandalized, looted and set on fire. Many businesses that were destroyed will choose to never rebuild, and many others that did survive will flee as soon as they can. In the end, those neighborhoods will be much worse off than they were before.

So did mayor Rawlings-Blake (or someone above her) purposely betray those communities?

The American people deserve some answers, because this is a very big deal.

First we saw this happen in Ferguson, and now it has happened in Baltimore.

When riots and looting break out where you live, will the police be ordered to “stand down” as well?

Chaos has come to America, and it is only going to get worse. I hope that you are getting prepared for what comes next.