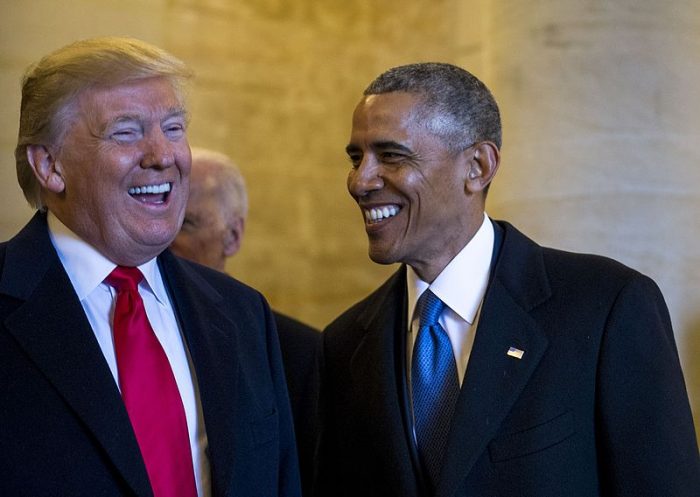 Throughout American history, most ex-presidents have chosen to move away from Washington D.C. once their terms have ended, and the vast majority of them have tried very hard not to interfere with their successors.  Unfortunately, Barack Obama has opted for the exact opposite approach.  His new home is less than two miles from the White House, and from this “command center” he will be directing the activities of an army of more than 30,000 anti-Trump activists.  In fact, as you will see below, this army has already been heavily involved in many of the protests and riots that have been popping up around the nation in recent days.  “Sabotage” is a very strong word, but it is becoming apparent that Obama intends to do all that he can to sabotage the Trump administration, and that is very bad news for the American people.

On Saturday, the New York Post ran an excellent article by author Paul Sperry that was entitled “How Obama is scheming to sabotage Trump’s presidency”.  In that piece, Sperry actually accuses Obama of setting up “a shadow government” to oppose Trump…

When former President Barack Obama said he was “heartened” by anti-Trump protests, he was sending a message of approval to his troops. Troops? Yes, Obama has an army of agitators — numbering more than 30,000 — who will fight his Republican successor at every turn of his historic presidency. And Obama will command them from a bunker less than two miles from the White House.

In what’s shaping up to be a highly unusual post-presidency, Obama isn’t just staying behind in Washington. He’s working behind the scenes to set up what will effectively be a shadow government to not only protect his threatened legacy, but to sabotage the incoming administration and its popular “America First” agenda.

The “army of agitators” that Sperry is talking about is actually a nationwide network of “community organizers” known as “Organizing for Action”.

If you go to the official website of Organizing for Action, you will see that there is a big picture of Obama right in the background of the homepage.  Organizing for Action “grew out of Barack Obama’s first presidential campaign”, and it claims to have 250 local chapters around the nation.

If Hillary Clinton had won the election, Organizing for Action would almost certainly have faded from the spotlight, but now that Trump is in the White House they are rapidly raising money and gearing up for war.

And one of the first things the organization is trying to do is to save Obamacare.  The following comes from NBC News…

To defend Obamacare, the group says it has planned 400 health care-focused events in 42 states this year with partners that include mainline liberal groups, like the Center for American Progress and Planned Parenthood, as well those from the progressive wing, like MoveOn.org.

OFA says 20,000 people have used their tool to call senators’ offices to urge them not to repeal Obamacare and says one million supporters have already taken action with OFA.

The goal is to further hinder the already stalling momentum around repeal the Affordable Care Act.

Far from sulking, OFA activists helped organize anti-Trump marches across US cities, some of which turned into riots. After Trump issued a temporary ban on immigration from seven terror-prone Muslim nations, the demonstrators jammed airports, chanting: “No ban, no wall, sanctuary for all!”

Run by old Obama aides and campaign workers, federal tax records show “nonpartisan” OFA marshals 32,525 volunteers nationwide. Registered as a 501(c)(4), it doesn’t have to disclose its donors, but they’ve been generous. OFA has raised more than $40 million in contributions and grants since evolving from Obama’s campaign organization Obama for America in 2013.

So many people have been pointing the finger at George Soros for funding and organizing anti-Trump activists, but the truth is that Organizing for Action is perhaps even more involved than Soros is.

And Barack Obama is guiding and directing Organizing for Action from his brand new compound less than two miles from the White House.

The ironic thing about all of this is that Obama is currently building a very tall brick wall around his compound while at the same time his army of activists is highly criticizing Trump for wanting to build a border wall to protect the United States from unwanted intruders.

If Obama doesn’t like walls, he should tear down his own wall first.

Another form of sabotage against the Trump administration is coming from Obama loyalists that are still embedded within various government agencies.

According to Trump, those loyalists are responsible for the very disturbing leaks that have been happening…

President Donald Trump pointed the finger at Obama administration holdovers at the White House and National Security Council for leaking information about private phone conversations he had with leaders of Australia and Mexico.

“It’s a disgrace that they leaked because it’s very much against our country,” Trump told Fox News Sunday, accusing “Obama people” in civil service positions for the leaks. “It’s a very dangerous thing for this country,” he added noting that these individuals were still being sought out and replaced.

Needless to say, after eight years under Obama many government agencies are absolutely crawling with people that are still very loyal to him.  Trump needs to do a major housecleaning, and that is going to take some time.

What is going on between Obama and Trump is a microcosm of what is happening to society as a whole.

Obama and his loyalists have totally bought into the radical progressive agenda of the global elite, and Donald Trump and his followers are very much against it.

I don’t know that it is possible for there to be much compromise between the two sides, and so that means that more conflict is ahead.

The election of Donald Trump has fired up the radical left like never before, and I believe that the protests and riots that we have seen so far are only just the beginning.

And if things go really bad under Trump, it is very easy to imagine widespread civil unrest erupting all over the nation.

Unfortunately, throughout all of this we are going to be having an ex-president sitting less than two miles from the White House guiding and directing the anti-Trump forces every step of the way.

28 thoughts on “Sabotage: Obama Is Commanding An Army Of 30,000 Anti-Trump Activists From His Home 2 Miles From The White House”