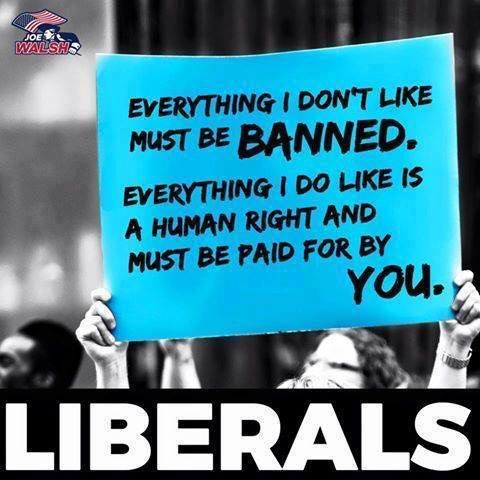 (By Greg Holt) Remember the good old days when either the Republicans or the Democrats won, but then both sides of the fence worked together – at least somewhat? Wow, how times have changed – with the fear-mongering and absolute discord, not to mention the vitriolic hatred on display.

The liberals and the left-leaning lame-stream media relentlessly attack and besmirch President Trump, not to mention the complete lack of respect for Trump. These are the same people who cheered on President Obama and Hillary Clinton regardless of what illegal, immoral, and idiotic policies and actions that were enacted by them.

The Right is by no means innocent, but when was the last time the Right committed the actions that have become commonplace to the liberal left? Violent protests, death threats, property destruction; basically anything goes with the left as long as it furthers their anti-American agenda. The liberal left is the party of anarchists – evildoers.

Take immigration and Trump’s travel ban for instance. According to the collective wisdom of the liberal left – the U.S. should welcome all comers, it’s what we do. Actually, that is a falsehood perpetuated by the left. Those of us who dare to agree with Trump are seen as un-American and mean-spirited.

President Trump’s Muslim immigration ban applies to seven countries, not all of them. Each country on the ban list is known for terrorism and terrorists seeking to enter the U.S. to further the goals of radical Islam to over-take the U.S.

Even with people I have spoken to myself, many seem to see only the plight of those poor people who cannot obtain entrance to our country. I agree that some innocents will get caught up in this travel ban, yet what of the safety of the American people? The media of course does not focus on that. What if one of the people that slips through into the U.S because of lack of vetting guns down one of YOUR family members? Will that change your mind? Why should it take that much for people to see reason?

What about the flow of drugs and criminals from Mexico? This is not to mention the many Mexican people who come here and do not even have a job, wanting demanding all matter of benefits be given them. Mexico is fine with having their people live here, in part because millions of dollars flow back to Mexico from their people here in the U.S. Again – what of the safety of the American people? What of the drain on the American tax payer? Why does the liberal left ignore these issues? Bradlee Dean writes in his latest column that anyone immigrating to Mexico had better be able to add to – and benefit the Mexican nation as a whole. Yet if anyone mentions the U.S. ought to embrace the same values, they are vilified.

I’m not against immigration, but anyone coming here should consider the U.S. home, their 1st country. People need to come to the U.S. legally, and be able to add value to this nation. The U.S. is not here to pay for everyone who comes here looking for a free ride. The Immigrants of yesteryear came here legally, worked hard, learned English, and considered the U.S. to be THEIR country. Many of today’s immigrants come here looking for access to free or subsidized housing, food stamps, and free health care. And why wouldn’t they? The U.S. provides it, even going to great lengths to advertise it – while too many of our own citizens cannot even find a job and vets die before getting adequate health care. This is a travesty of social justice that should never have happened in the first place – our citizens should come first, often they are last.

The liberal left promotes the values of the homosexual and transgender agenda as well. What people do in the privacy of their own home is none of our business – but when their actions threaten the safety of the American people, then it’s everyone’s business. The destruction of traditional marriage and family is tearing this country apart. It used to be that family was fiercely defended, not anymore. Now, family is fiercely abandoned in favor of individuality no matter the cost.

It has also been said: united we stand, divided we fall.

Apparently, even our own intelligence community has (probably long ago) joined the fray in colluding against Trump. Draining the Swamp desperately needs to be done, but the IT community would rather support the liberal left (like Obama) instead of helping Trump to heal the damage done to this nation. Corruption pays better – just ask the Clintons.

The United States has always stood in the way of the One World Government, a New World Order. If the U.S. continues to accept and support the values of the liberal left – that will soon change. Open borders, anything goes, government corruption, loss of marriage and family values – this WILL lead to the loss of U.S. sovereignty to the likes of leftist libs like George Soros, the Clintons, the Obamas, the Bilderberg Group, and the United Nations to name a few. These godless and deeply corrupt persecutors of our great nation are actively working to usher in the new age – The One World Government.