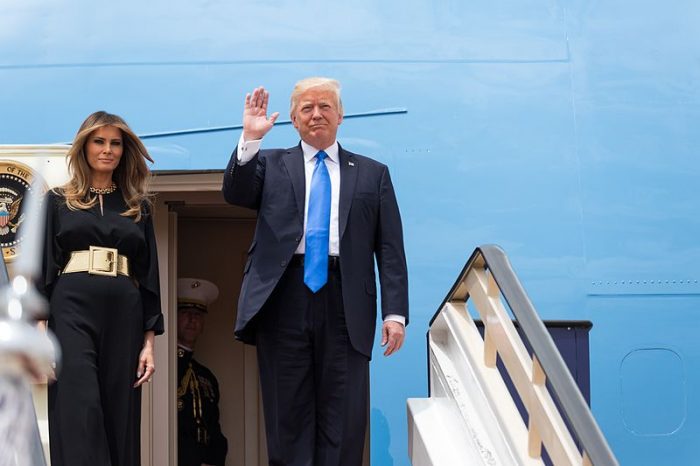 A stock market crash is coming, and the Democrats and the mainstream media are going to blame Donald Trump for it even though it won’t be his fault. The truth is that we were headed for a major financial crisis no matter who won the election. The Dow Jones Industrial Average is up a staggering 230 percent since the lows of 2009, and no stock market rally in our history has ever reached the 10 year mark without at least a 20 percent downturn. At this point stocks are about as overvalued as they have ever been, and every other time we have seen a bubble of this magnitude a historic stock market crash has always followed. Those that are hoping that this time will somehow be different are simply being delusional.

Since November 7th, the Dow is up by about 3,000 points. That is an extremely impressive rally, and President Trump has been taking a great deal of credit for it.

But perhaps he should not have been so eager to take credit, because what goes up must come down. The following is an excerpt from a recent Vanity Fair article…

According to Douglas Ramsay, chief investment officer of the Leuthold Group, Trump administration officials will come to regret gloating about the market’s performance. That’s because Trump enters the White House during one of the most richly valued stock markets in U.S. history. The last president to come in at such valuations was George W. Bush, and the dot-com bubble burst soon afterward. Bill Clinton began his second term in a more overvalued stock market in 1997, and exited unscathed. But if his timing were different by just a year, he would have been blamed for the early-aughts market crash.

This stock market bubble was not primarily created by Barack Obama, Donald Trump or any other politician. Rather, the Federal Reserve was primarily responsible for creating it by pushing interest rates all the way to the floor during the Obama era and by flooding the financial system with hot money during several stages of quantitative easing.

But now the economy is slowing down. Economic growth on an annual basis was just 0.7 percent during the first quarter, and yet the Federal Reserve is talking about raising interest rates anyway.

The Federal Reserve also raised interest rates in a slowing economy in the late 1930s, and that had the effect of significantly extending the economic problems during that decade.

After this next crisis, hopefully Congress will finally understand that it is time to shut the Federal Reserve down for good, and I am going to do all that I can to make that happen.

Ron Paul is someone that I look up to greatly, and he also agrees that the blame for the coming crisis should be placed on the Federal Reserve instead of on Trump…

“There are some dire predictions that say in the next year, or 18 months, we have something arriving worse than 2008 and 2009, the downturn is much worse,” Paul said in a recent interview with liberty-minded anti-globalist radio host Alex Jones. “They’ll say, ah, it’s all Trump’s fault. No. It wasn’t. 08 and 09 wasn’t Obama’s fault. It was the fault of the Federal Reserve, it was the fault of the Keynesian economic model, the spending too much, the deficit. So, unfortunately, there’s nothing he can do — Trump can’t do it.”

Paul, a medical doctor who took a keen interest in economics throughout his celebrated career as a constitutionalist in Congress, said Trump could “help” the situation by pursuing good policies. “But you can’t avoid the correction, the correction is locked in place, because the deficits are there, the malinvestment, everybody agrees interest rates have been too low too long,” he said in the late January interview. “The only thing he can do is allow the recession to come, get it over with, liquidate the debt. Politically, nobody wants that, so you’re going to see runaway inflation before you see this country wake up.”

Over the past decade, the U.S. economy has grown at an average rate of just 1.33 percent, and there is no possible way to put a positive spin on that.

And now the economy appears to be entering a fresh slowdown. A couple of months ago, banking giant UBS warned about “a sudden slowdown in new credit”…

There’s been a sudden slowdown in new credit extended to businesses over the last year, one that strategists at UBS are calling “drastic” and “highly uncommon outside of economic downturns.”

And since that time, lending has tightened up even more. The following comes from Zero Hedge…

According to the latest Fed data [7], the all-important C&I loan growth contraction has not only continued, but over the past two months, another 50% has been chopped off, and what in early March was a 4.0% annual growth [4]is now barely positive, down to just 2.0%, and set to turn negative in just a few weeks. This was the lowest growth rate since May 2011, right around the time the Fed was about to launch QE2.

At the same time, total loan growth has likewise continued to decline, and as of the second week of May was down to 3.8%, the weakest overall loan creation in three years.

This is exactly what we would expect to see if we were entering a new recession. Neil Howe, one of the authors of The Fourth Turning, recently warned that “winter is coming” and I have to admit that I agree with him.

So when the stock market finally crashes, how bad could it be?

Well, one analyst that spoke to CNBC said that other historic market crashes have averaged “about 42 percent”…

“If you look at the market historically, we have had, on average, a crash about every eight to 10 years, and essentially the average loss is about 42 percent,” said Kendrick Wakeman, CEO of financial technology and investment analytics firm FinMason.

And as I have explained many times in the past, stocks would have to fall about 40 to 50 percent from current levels just for the stock market to get back to “normal” again. The valuations that we are seeing today are absolutely insane, and there is no possible way that they are sustainable.

When the crash happens, many people will be pointing their fingers at Trump, but it won’t be his fault.

Instead, it will be the Federal Reserve that will be at fault, and hopefully this coming crisis will convince the American people that it is time to end this insidious debt-based central bank for good.