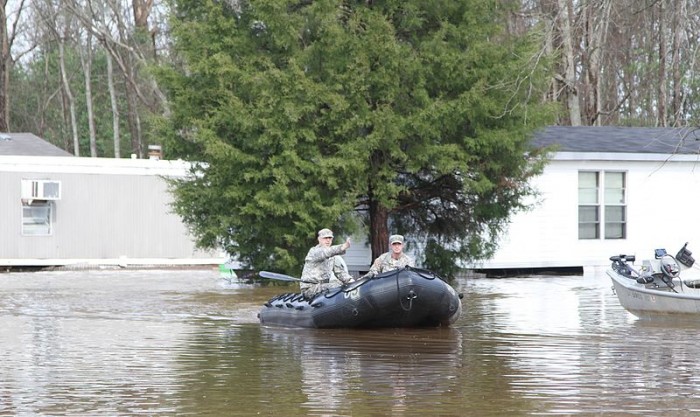 Since last October, the United States has been hit by “historic flood” after “historic flood”, and this latest flooding down in Louisiana that is making headlines all over the world has been caused by a “500 year storm“.  Even before some areas of the state received more than 30 inches of rain, this was already the worst 12 months for floods in U.S. history, but without a doubt this has put an exclamation mark on this exceedingly unusual stretch of flooding.  There are some rivers down in Louisiana that have crested three to four feet higher than their previous all-time records, and Governor Edwards is using the words “unprecedented” and “historic” to describe these floods.  So far, 20,000 people have been rescued by authorities, and Governor Edwards even had to evacuate the Governor’s Mansion due to chest-high water in the basement.

One of the most amazing images from the flooding down in Louisiana was of caskets that had been washed up from a graveyard that were literally floating down the street.  Meteorologists are telling us that the storm that brought all of this rain was essentially equivalent to a tropical storm…

As meteorologist Tim Destri with the NWS New Orleans/Baton Rouge office explains it, a low pressure system forms near the surface bringing deep tropical moisture from the warmer water in the Caribbean — almost like a hurricane but without the wind and the name.

“Everything came together just right like it would with a tropical weather system,” Destri said.

“This probably ranked up there with some of the top rainfall-producing systems in history,” Destri said. “Damage is really significant, I mean extreme, because it’s been so devastating with some houses just completely inundated, just scenes like Katrina almost.”

In fact, in some areas the damage was even worse than we saw during Hurricane Katrina.  According to the Washington Post, one resident said that this flooding was “the worst situation I’ve ever been through“.

And unfortunately, it isn’t over yet.  More rain was forecast for today, and that is going to make the flooding even worse.

They will be talking about this current flood down in Louisiana for many years to come, and we will add this flood to the other historic floods on my ongoing list from previous articles…

June: Extremely heavy rain caused the Brazos River in Texas to hit its highest level “in more than a century“, and many parts of Houston found themselves under water yet once again.  According to CNN, this was “the second year in a row that Texas has been hit by 500-year floods”…

June: West Virginia was hit by the deadliest flash flood in the United States in six years, and 23 people died as a result.  The following comes from Wikipedia…

On June 23, 2016, a flood hit areas of the U.S. state of West Virginia and nearby parts of Virginia, resulting in 23 deaths. The flooding was the result of 8 to 10 inches (200 to 250 mm) of rain falling over a period of 12 hours, resulting in a flood tied for seventh among Deadliest floods in West Virginia history. It is also the deadliest flash flood event in the United States since the 2010 Tennessee floods.[2]

Meanwhile, horrible wildfires continue to rip through the state of California.  The latest major wildfire to make headlines all across the nation has literally reduced homes, offices and businesses to “smoldering rubble” in the little town of Lower Lake…

Entire streets have been reduced to smoldering rubble, and more than 175 buildings and other structures have been destroyed, as a Northern California wildfire continues to spread.

The fire about 100 miles north of San Francisco has so far spread to 3,000 acres and is 5 percent contained, officials said.

The blaze on Sunday swept into Lower Lake, a town of about 1,200 people, according to The Associated Press, where it burned buildings including a post office, a Habitat for Humanity office and a winery.

If you have read my latest book, you already know that 2015 was the worst year for wildfires in all of U.S. history.

Is there some kind of a connection?

Why are all of these disasters happening to us one right after another?

Could it be possible that there is an explanation other than bad luck?

As you can probably guess, I have come to the conclusion that we are experiencing something that goes far beyond bad luck.  Just like many others out there, I believe that someone is trying to tell us something, but unfortunately most Americans are simply not paying attention.

2 thoughts on “This Has Been The Worst 12 Months For Floods In U.S. History”