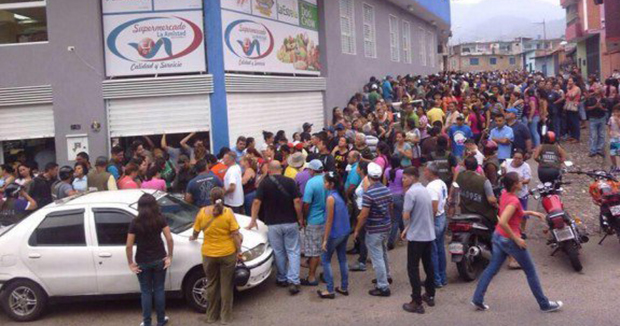 (By Daisy Luther) Here in America, we’re preparing to eat until we waddle, open gift after gift, and travel to see loved ones. Meanwhile, the Christmas scenario in Venezuela is very different indeed.

Did you ever wonder what Christmas might be like after it hits the fan? Here’s a glimpse.

In Venezuela, money has lost its value so much that merchants weigh it instead of counting it. They ran short of food months ago, and the food that is available is astronomical in price – eggs, for example, are $150 a dozen. Last week, citizens were forced to turn in all large bills as their accounts were frozen, resulting in chaos and unrest as people were suddenly unable to buy gifts or food for the holiday.

It is impossible to understand the reasoning behind this unannounced, improvised policy that has essentially frozen people’s bank accounts at a time of year when access to funds is most needed.

First, we saw long bank lines. Then, over the past week, as people have been unable to cash checks, make purchases (including Christmas presents) or pay for public transit, complaint has turned to violent protests and looting. (source)

But President Nicholas Maduro thinks he can fix all that by providing toys.

People can’t eat, but their children will receive one of 3.8 million toys that the President had stolen so he could look good to the citizens:

Maduro’s government has seized the toys from a distributor he claims hoarded them in a scheme to claim a shortage and foist higher prices on an unsuspecting public. …And now, Maduro, riding in on a white horse … wait, make that a sleigh pulled by reindeer … will oversee the distribution of 3.8 million toys to Venezuelan girls and boys.

Never mind that starving Venezuelan families would rather see bread, meat, flour, cooking oil and medicine come down their chimneys this Christmas. The confiscation smacks of grandstanding by a socialist regime that has wrecked the economy and is now looking for scapegoats — and an image makeover. (source)

Miguel Angel Latouche, an associate professor at Universidad Central de Venezuela, gives us an inside glimpse at the scene in Caracas:

Buy a ham, make tamales, string up lights? Those rituals seem irrelevant to many.

It’s been a hard year for Venezuela. Hugo Chávez promised that his “21st Century Socialism” would be a luminous moment in human history and a solution to the troubles of the poor. But it more closely resembles the “Real Socialism” of the last century, with the government of Nicolas Maduro restricting individual liberties and turning citizens into clients of populism that looks everyday more like fascism.

Scarcity itself has become a form of social control. With so many Venezuelans spending their days waiting in lines to get food, medicine, and, most recently (and fruitlessly), cash, there’s little time for protest. Christmas carolling and Christmas bonuses have been replaced with interminable queuing.

The government can try to cover up just how bad things have gotten. But Venezuelans know that this year, for many, there will be no Christmas. Holiday spirit just can’t quite overcome the disappointment, hunger, exhaustion and rage. And behold: a country of empty toy stores, bakeries without bread, tamales missing ingredients, and families who can’t visit each other. There’s just not enough money.

In this economy of survival, some of us are lucky enough to eat several meals a day. Others dig through garbage for bread crusts, a veritable army of the famished who take to the streets every morning and sleep under open skies at night – a daily reminder that we’ve all gotten poorer over the past few months.

This is Christmas during an economic collapse.

For many Venezuelans, Christmas will be just another gloomy day in a dangerous world.

This is why preppers dedicate so much effort to getting ready for a long-term collapse. We don’t want to be powerless when our families are hungry. We don’t want to rely on the government to provide meager sustenance and gifts. We want to be self-reliant. If you’ve been thinking about prepping, let this article about the terrible conditions in the collapse be the thing that motivates you. Go here to learn more.

2 thoughts on “Venezuela: What Christmas Is Like During an Economic Collapse”