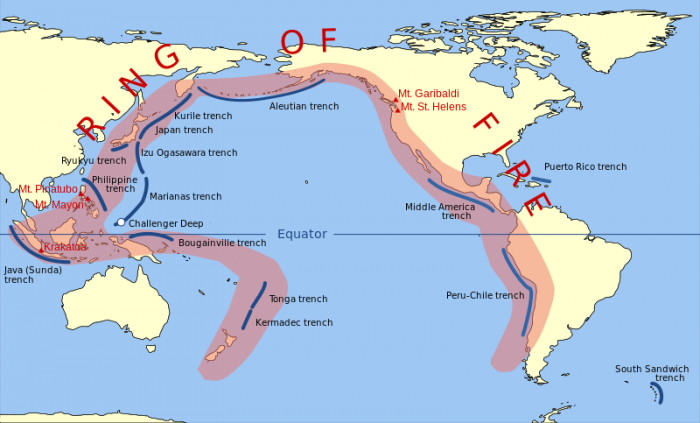 Have you noticed that seismic activity along the Ring of Fire appears to be dramatically increasing? According to Volcano Discovery, 39 volcanoes around the world have recently erupted, and 32 of them are associated with the Ring of Fire. This includes Mt. Popocatepetl which sits only about 50 miles away from Mexico City’s 18 million inhabitants. If you are not familiar with the Ring of Fire, it is an area roughly shaped like a horseshoe that runs along the outer perimeter of the Pacific Ocean. Approximately 90 percent of all earthquakes and approximately 75 percent of all volcanic eruptions occur along the Ring of Fire. Just within the last 24 hours, we have witnessed a 4.4, a 5.4 and a 5.7 earthquake in Alaska, a 6.8 earthquake in Chile and 20 earthquakes in Indonesia of at least magnitude 4.3. And as you will see below, this violent shaking along the Ring of Fire seems to continue a progression of major disasters that began back during the month of September.

For whatever reason, our planet suddenly seems to be waking up. Unfortunately, the west coast of the United States is one of the areas where this is being felt the most. The little city of San Ramon, California is about 45 miles east of San Francisco, and over the past several weeks it has experienced a record-breaking 583 earthquakes…

A total of 583 small earthquakes have shaken San Ramon, California, in the last three weeks or so – more than five times the record set 12 years ago, according to the latest US Geological Survey updates.

“It’s the swarm with the largest number of total earthquakes in San Ramon,” said USGS scientist David Schwartz, who is more concerned about the size of quakes than he is the total number of them. Still, the number tops the previous record set in 2003, when 120 earthquakes hit over 31 days, with the largest clocking in at a magnitude of 4.2.

Could this be a prelude to a major seismic event in California?

Meanwhile, records are being shattered in the middle part of the country as well.

For instance, the state of Oklahoma has already set a brand new yearly record for earthquakes…

The state recorded its 587th earthquake of 3.0 magnitude or higher early this week, breaking the previous record of 585. That record was set for all of 2014, meaning that Oklahoma has now had more 3.0 magnitude or higher earthquakes so far in 2015 than it did in all of 2014. So far this year, E&E News reports, Oklahoma’s averaged 2.5 quakes each day, a rate that, if it continues, means the state could see more than 912 earthquakes by the end of this year.

Oklahoma has also experienced 21 4.0 magnitude or greater earthquakes so far this year — an increase over last year, which saw 14.

Starting with a magnitude-4.1 temblor at 5:11 a.m. close to the Oklahoma-Kansas border, the region experienced a series of six earthquakes within a 75-minute period Saturday morning, the U.S. Geological Survey reported on its website.

The largest earthquake Saturday morning was the 4.1, which had an epicenter nine miles northwest of Medford, Okla., 59 miles southwest of Wichita.

So why aren’t more Americans alarmed that these records are being broken?

We are seeing things that we have never seen before, and I believe that it will soon get even worse.

And this dramatic increase in seismic activity that we are now seeing appears to fit into a larger pattern of major disasters that we have been witnessing over the past couple of months.

As we approached the end of the summer, all of a sudden massive wildfires erupted all across the western third of the country. According to the National Interagency Fire Center, the only time in U.S. history when wildfires had burned more acres by the end of October was during the record-setting year of 2006.

In 2015, a lot of these wildfires have really been threatening highly populated areas. I know, because at one point a major fire came within about 10 miles of my own house. Since the beginning of August, Barack Obama has made an astounding 25 disaster declarations related to fires, and by the end of September the horrible fires that were threatening key areas of the state of California were making headlines all over the world.

Then as we got to the very end of the month of September, a new kind of disaster began to take center stage. As I wrote about just recently, the storm that would later became known as Hurricane Joaquin developed into a tropical depression on September 28th.

Even though that hurricane never made landfall in the United States, moisture from that storm caused a tremendous amount of chaos along the east coast.

The governor of South Carolina, Nikki Haley, said that it was the most rain that some areas of her state had witnessed “in a thousand years”, and it is being projected that the economic damage that was done by all of the flooding “will probably be in the billions of dollars”.

Shortly after the flooding in South Carolina, a massive storm dumped an enormous amount of rain on southern California. Because that area had been experiencing severe drought for so long, all of that rain caused tremendous flooding and massive mudslides. Rivers of mud literally several feet thick completely stopped traffic along many major roads across the region. If you got caught in those rivers of mud, you were lucky to get out with your life. In fact, authorities pulled one dead man out of a vehicle that got completely buried by mud several days after the storms had passed. It took them that long to finally get to him.

The middle of the country was not spared either. Hurricane Patricia ended up being one of the strongest hurricanes ever measured, and the remnants of that storm dumped an incredible amount of rain on the state of Texas. There was so much flooding that a train was literally knocked off the tracks by the water. And about a week after that there was more flooding in the state that caused at least six deaths.

Overall, it has really been a bad couple of months for major disasters, and this sequence of events seems to have begun during the month of September.

So what should we make of all this? Please feel free to add your voice to the discussion by posting a comment below…