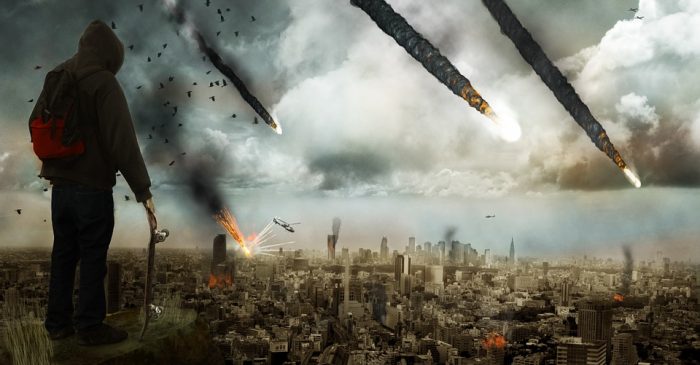 How will you handle all of the people that will show up at your door when a major crisis strikes because they haven’t been making any preparations of their own? Earlier today somebody asked me about this on Facebook, and I thought that it was a very good question, because thousands of my readers will be faced with this precise dilemma at some point. When America’s day of disaster arrives, it is inevitable that most of us that are prepping will have family, friends and neighbors showing up at our door asking for help. When that happens, what will you do?

There are some people out there that are very honest about the fact that they do not plan to share what they have stored up with anyone, and that even close family members will be greeted with a shotgun if they show up unannounced.

Personally, I could never do that. My wife and I have always had the philosophy that we need to work extra hard to prepare because there will be people that need to depend on us when times get really hard. And turning away those that are in desperate need would go against everything that we stand for. After all, I am even writing a book that is all about the true meaning of love, and so it would be quite hypocritical of me to turn away those that I care about when they need me the most.

And even if I wanted to be cold-hearted, my wife would never let me get away with it. She has such a soft heart that she literally can’t bear to even see a bug die. We often have spiders invade our place, and when she sees one she gently captures it and sets it free outside. I tell her that they will just breed and come back in even bigger numbers, but that doesn’t seem to matter to her. So needless to say we are going to have to find a non-violent way to deal with our spider problem.

But I certainly understand the frustrations of those that have been trying to warn family and friends about what is coming for years and they never seem to listen.

And it is true that resources are limited. For the vast majority of us, there is only so much money and energy that we can put into prepping, and so why should those that have refused to listen to the warnings and prepare in advance be able to benefit from all of our hard work?

Unfortunately, life is not always fair.  And we also need to realize that there is a tremendous amount of deception going on out there these days.  Some of the deceptions that are currently circulating are very strong, and it can be very easy to be sucked into them.  So we need to have compassion for those that have been led into confusion.

Look, there are literally thousands of watchmen all across this country that have never wavered from warning America about what is coming even for a moment. That is because they are standing on the truth and not on wishful thinking that is the product of overactive imaginations.

The ingredients for the “perfect storm” that so many watchmen have been warning about for ages are starting to come together right before our eyes. We are closer to World War III than we have been in decades, our politicians are openly admitting that our relations with Russia are at “an all-time low”, the federal government is 20 trillion dollars in debt, our nation is on the verge of being torn apart by strife and civil unrest, the financial markets are primed for a crash of epic proportions, there are mass die-offs of animals all over the globe, and natural disasters are happening with frightening regularity as the crust of our planet rattles and shakes.

But we are somehow supposed to believe that “everything is going to be wonderful” even though we continue to kill babies on an industrial scale, just about every form of sexual immorality that you can possibly imagine is exploding all around us, our “entertainment” industry is an open sewer, and we lead the world in both legal and illegal drug use.

I’ve got dozens more facts that I could quote regarding our moral decay, but I think that you get the point.

If we actually changed our behavior, I could understand why it would make sense for America to be blessed.

But we haven’t changed our behavior, and there are no signs that this is going to happen any time soon.

As humans, we have the freedom to choose, but those choices inevitably have consequences.

The same thing is true for our nation as a whole. We have made a whole bunch of exceedingly bad choices, and those choices are going to result in some incredibly painful consequences.

So you can do whatever you want, but my wife and I are going to continue to get prepared. America is headed for a date with disaster, and those that are suggesting otherwise are not being honest with you.

4 thoughts on “Will You Turn Away Family, Friends And Neighbors At Your Door When America’s Day Of Disaster Arrives?”