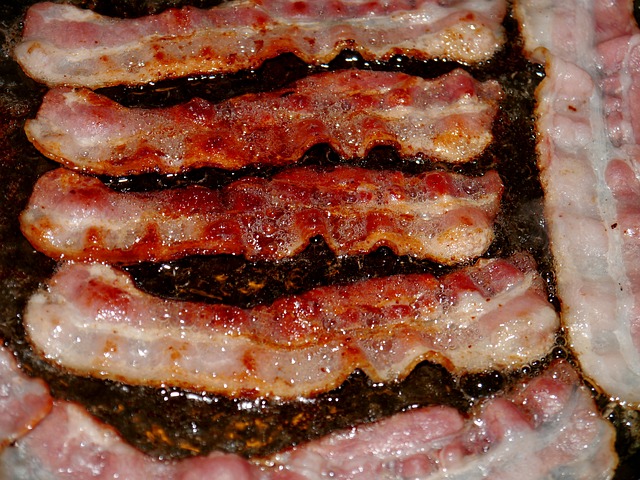 What we eat is literally killing us. A stunning new report from the World Health Organization has concluded that there is clear scientific evidence that eating processed meat causes cancer. In particular, the WHO specifically mentioned processed pork products such as bacon, sausages and hot dogs. Of course for those of us that have been investigating these things for a long time, this doesn’t exactly come as a shock. The alternative health community has been talking about the evidence that pork causes cancer for decades. But for the WHO to come out and say these things publicly is a really big deal.

News of this new report made headlines all over the globe on Monday. The following comes from a story in USA Today…

Kurt Straif of the International Agency for Cancer Research said the risk of developing colorectal cancer from eating processed meat remains small but rises with the amount consumed. Consuming red meat was linked to colorectal, pancreatic and prostate cancer, but the link was not as strong, the IARC report said.

“In view of the large number of people who consume processed meat, the global impact on cancer incidence is of public health importance,” Straif said.

And the numbers that the WHO is talking about are quite striking.

For example, the WHO says that adding just one hot dog to your diet per day significantly increases your risk of colorectal cancer…

According to studies cited in the WHO report, for every 50 grams of processed meat someone eats per day — the equivalent of a little more than a single hot dog — your risk of colorectal cancer goes up by 18%.

In case you still aren’t getting the picture, Cancer Research UK has put together a pretty little graphic to help you figure it out… 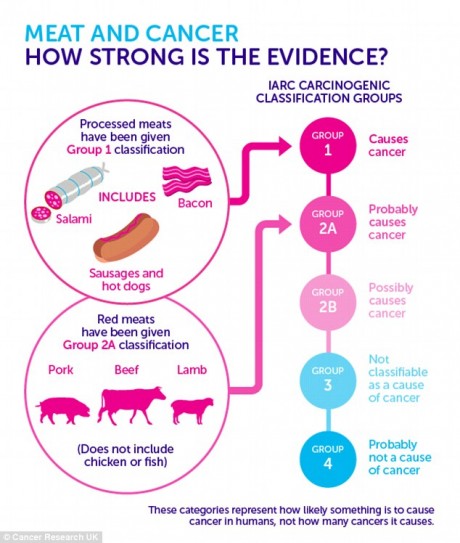 Once again, none of this is really “new”.

Over the past few years, some of the most prominent organizations in the medical world have been talking about this link…

Eating too much red meat has already been linked to heart disease, various types of cancer, and early death, but has never officially been classified as a cancer-causing food. In 2014, the WHO’s International Agency for Research on Cancer (IARC) – the same organization arm that classified the herbicide glyphosate as probably carcinogenic – cited studies linking red and processed meats to colorectal, esophageal, lung, and pancreatic cancer, saying that determining the connection was a “high priority.”

According to the World Cancer Research Fund, “There is strong evidence that eating a lot of these foods [red and processed meat] increases your risk of bowel cancer.” Experts estimate that half of all cases of the disease could be prevented by adopting a healthier lifestyle.

Additionally, according to Harvard Medical School, cutting out or reducing red meat consumption can help prolong your life by up to 20%. The study, published in the Archives of Internal Medicine, found unequivocally that people who ate the most red meat (especially processed red meats) died younger, and most often from cardiovascular diseases and cancer.

And the evidence that pork is particularly bad for us is absolutely overwhelming. The following is an extended excerpt from one of my previous articles…

But is that actually healthy for us?

Most people have never stopped to consider this, but they should. The following is an excerpt from a paper entitled “The Adverse Influence Of Pork Consumption On Health” by Professor Hans-Heinrich Reckeweg…

The fact that pork causes stress and gives rise to poisoning is known. It is obvious that this does not only apply to preparations of fresh pork such as cold cuts, knuckles, feet, ribs and cutlets, etc., but also to cured meats (ham, bacon, etc.) and to smoked meats prepared for sausages.

Consumption of freshly killed pork products causes acute responses, such as inflammations of the appendix and gall bladder, biliary colics, acute intestinal catarrh, gastroenteritis with typhoid and paratyphoid symptoms, as well as acute eczema, carbuncles, sudoriparous abscesses, and others. These symptoms can be observed after consuming sausage meats (including salami which contains pieces of bacon in the form of fat).

Sadly, a significant number of my readers will respond very negatively to this article.

Because they absolutely love pork and they do not want to give it up.

But the meat industry was quick to dismiss the warning claiming it had been ‘rigged’ and was not based on proper evidence.

‘Followers of the Mediterranean diet eat double the recommended amount of processed meats.

‘People in countries where the Mediterranean diet is followed, like Spain, Italy and France, have some of the longest lifespans in the world and excellent health.

Hopefully some people will be persuaded by this article, but I don’t expect that most people will.

Most people end up believing exactly what they want to believe, and that includes the truth about the food that they are shoving into their faces.

Unfortunately, in the United States today we can’t even rely on the big food corporations to label their products accurately. Just check out what a different new study recently discovered…

Some dogs were labeled pork-free — important for certain religions — but were found to contain pork after all. Others listed only one type of meat but included several or didn’t contain all the ingredients listed.

Even grosser: 2 percent of all samples were found to have traces of human DNA in them. Veggie dogs were the worst off, accounting for 67 percent of the hygiene issues and two-thirds of the human DNA found.

The good news: As bad as some brands were found to be, there are some trustworthy options out there. The report lists the soy chorizo and meatless corn dogs at Trader Joe’s as safe picks for vegetarians, and Taveritte’s, Whole Foods’ 365 brand, Aidell’s, Hebrew National, Ball Park, Oscar Mayer, and Johnsonville for meat eaters.

And just because your hot dog is labeled “vegetarian” does not mean that there isn’t any meat in it. The following is an excerpt from a recent Natural News article…

The fact that human DNA is being found in hot dogs might mean Bob fell into the meat grinder again. More likely, however, it just means that people working on these food lines aren’t wearing beard nets or gloves. It’s interesting that most of the problems were found in veggie dogs, which are positioned as being healthier than meat-based hot dogs. Apparently, veggie dogs aren’t 100% vegetarian because they also contain some human parts.

According to the Clear Food report, 10% of vegetarian hot dogs contained meat. Sadly, Clear Food refuses to name which brands were contaminated!

It is 2015, and yet with all of our technological advances we can’t even trust that our food is not severely contaminated?

I wish that I had better news for you. As Americans, we have a love affair with meat. Personally, I don’t eat pork, but I do really enjoy beef, turkey, chicken, etc. Most of us are accustomed to having meat several times per day, and the vast majority of us never really stop to think of the health impact that this may be having on us and our families.

Do you think that this new WHO report will cause people to stop and reflect on the garbage that they are shoveling down their throats on a daily basis?

5 thoughts on “Yes, The Scientific Evidence Says That Eating Pork Does Cause Cancer”