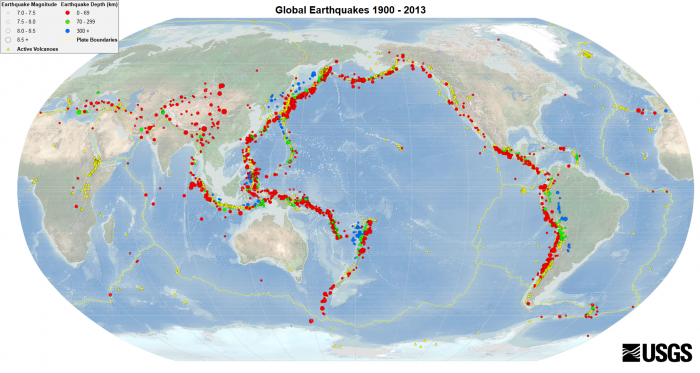 Global earth changes appear to be accelerating once again, but the mainstream media in the United States is not talking about it, and so most Americans have absolutely no idea what is happening. Within the last 24 hours, we have seen close to 40 significant earthquakes of at least magnitude 2.5 along the Ring of Fire, but even more alarming are the two major volcanic eruptions which just took place. Mount Soputan is one of the most dangerous volcanoes in Indonesia, and it erupted twice on Sunday morning. According to the Daily Mail, authorities are reporting that hot volcanic ash was shot 25,000 feet into the sky…

A volcano in central Indonesia has erupted, sending columns of thick ash spewing as high as 25,000 feet into the sky.

Mount Soputan, a 6,000ft peak in Minahasa on the northern part of Sulawesi island, erupted twice on Sunday morning.

A two-and-a-half mile exclusion zone has been enforced around the mountain as the national disaster agency warns local residents to avoid the peak.

Those eruptions may have been more spectacular, but the eruption that we just witnessed down in Mexico is potentially much more concerning.

Mt. Popocatepetl has been called the most dangerous mountain in North America for a reason, and officials are carefully watching “Don Goyo” after it “exploded” on Saturday evening…

The active volcano Popocatepetl, located in Central Mexico, has exploded Saturday evening, sending ash two kilometers into the air with the cloud of smoke moving in a northeast direction.

Videos from the eruption show a powerful explosion and traces of magma flowing out of the crater. Possible ash fall is expected in areas surrounding the summit. At the moment the volcanic warning issued by the Federal Civil Protection remains at ‘Phase 2’.

And when I say “devastate”, I am not just talking about a disaster that will inconvenience people for a few weeks.

I am talking about an event which will cause death and destruction on an absolutely immense scale. According to the experts, in the distant past “Don Goyo” actually produced gigantic mud flows that buried entire Aztec cities…

Meanwhile, significant earthquakes continue to rattle areas all along the Ring of Fire.

Indonesia was hit by a magnitude 6.1 earthquake within the last 24 hours, and a magnitude 5.9 earthquake in Australia made headlines all over the world…

Locals in Carnarvon reported feling tremors, after the massive earthquake shook the region this afternoon.

One resident reported to EMSC earthquake tracker: “I am holidaying with my children we all felt the beds shake.”

We live at a time when seismic activity is becoming more intense and more frequent. Some of the “experts” in the United States insist that the numbers are rising simply because we are doing a better job of “detecting” seismic activity these days, and they promise that we have absolutely nothing to worry about. But a lot of people are skeptical of that explanation, because they can see that our planet appears to be getting increasingly unstable.

Could it be possible that an era of dramatically increased seismic activity is about to change all of our lives in a major way?

Earlier today, I came across a British article that discussed the fact that scientists that have studied a supervolcano near Naples, Italy are extremely concerned that it may be “reawakening”…

Yellowstone volcano has a rival in Europe, according to a recent study from scientists based in the region. The volcano is based in Naples to the west, in a place known as Phlegrean fields, once the site of a world-changing eruption. Scientists have now picked up on new signs of the volcano complex starting another cycle. This particular volcano is a threat as the end point of the major cycle could be a significant eruption, rivalling the outcome of a Yellowstone eruption in the US.

Scientists observing the volcanic cycle of one Campi Flegrei, located in Napoli, are concerned of a “potential reawakening”.

Of course we have seen many formerly “dormant volcanoes” reawaken in recent years.

Something very unusual definitely appears to be happening to our planet, and unlike the mainstream media in the United States, this is something that we will be keeping a very close eye on.