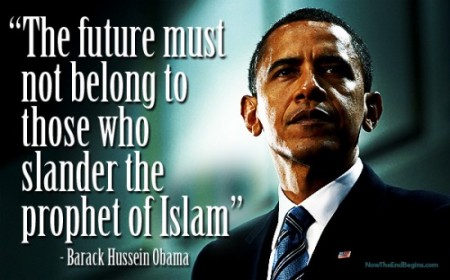 “The only plausible explanation for many actions taken by President Obama and his administration is that they are working counter to the security of the United States of America,”

“Barack Hussein Obama is an Islamist
in his foreign policy perspectives and supports their cause.”

He cites 6 reasons for his opinion:

1. The unilateral release of five senior Taliban back to the enemy while the enemy is still fighting us.

4. Negotiations with Hamas, a terrorist group.

5. Returning sanction money, to the tune of billions of dollars, back to the theocratic regime led by Iran’s ayatollahs and allowing them to march on towards nuclear capability.

“In an operation that was again unilateral with no Congressional approval, U.S. military support and resources were given to Islamist groups fighting against Moammar Qaddafy — and we know the results of that action.

Not long after, one of the groups this administration armed, Ansar al-Sharia, took responsibility for the terrorist attack and murder of our U.S .Ambassador Chris Stevens, Sean Smith, Ty Woods, and Glenn Doherty at the Benghazi Special Mission Compound (SMC).

Oh, and that same group claims it has established an Islamic caliphate in eastern Libya, based in Benghazi. Just two weeks ago, the United States of America evacuated the Libyan embassy in Tripoli due to security concerns.

But I guess it’s all hunky-dory there now, because according to the Washington Free Beacon, “The Obama administration has lifted longtime restrictions on Libyans attending flight schools in the United States and training here in nuclear science, according to a final amendment of the ban recently approved by the Office of Management and Budget (OMB).”

“Less than two years after the deadly terrorist attacks in Benghazi, Libya that killed four Americans, the Department of Homeland Security (DHS) is poised to sign off on an amendment reversing the ban, which was enacted following a wave or terrorist attacks in 1980s and prevents Libyans from studying these sensitive trades in the United States.”

We just evacuated Libya due to security concerns. There can be no doubt that Libya is an Islamic terrorist sanctuary state, thanks in no uncertain terms to Obama, and now he wants them to come here and learn how to fly planes and understand nuclear science?

“Can anyone explain what the strategy and objective is here in lifting this ban with a nation that is or should be on the terrorist watch list?” he asks. ”Sorry, but I can only explain this one way: Barack Hussein Obama is an Islamist in his foreign policy perspectives and supports their cause.”

All the circumstantial and anecdotal evidence points to that conclusion.

“The pivot away from the Middle East seems to be nothing more than an opportunity to enable Islamists and their goals. Anyone supporting this Libyan ban being lifted is indeed an enemy of this state.”

The great thing about Allen West is, they can’t call him “racist”.

Levin, author of “Ameritopia: The Unmaking of America,” pointed out that the president’s loyalties seem to be on the side of Morsi and the Muslim Brotherhood — which he deemed the “community organizers for Arabs.” Levin suggested that stemmed from him surrounding himself with radical elements all throughout his life.

“Basically Obama is telling the Egyptian military not to undertake a coup or all the enormous amount of military support we’ve been giving the military will be withdrawn,” Levin said. “Isn’t that nice?

“Obama likes the Muslim Brotherhood. He just does. You know, they’re the community organizers for the Arabs.”

“Look at it that way. You know, this is the guy that sat 20 years in the pews listening to, what’s his ass, what’s his name — [Jeremiah] Wright,” he continued. “Oh, the Rev. Wright — treat him with honor, respect.

Let’s start from the beginning. Obama’s mom and dad divorced when he was 2. His  mother married again after divorcing his bio-dad when he was 2. His step-dad, Lolo Soetoro, was a muslim and they lived in Indonesia. Mr. Soetoro educated his stepson as a good muslim by enrolling him in one of Jakarta’s Wahabbi schools.

Obama attended a Wahabbi school in Indonesia as a young boy, enrolled as a Muslim. Wahabbism is the radical teaching
that created the Muslim terrorists who are now waging
Jihad on the industrialized world.

Obama’s sympathies definitely lie with Islam, as reflected in his own quotes taken from the video below:  “Many Americans have Muslims in their family or have lived in a Muslim majority country. I know, because I am one of them. My father came from a Kenyan family that includes generations of Muslims. As a boy I spent several years in Indonesia. That experience guides my conviction.”  Hmmm–What conviction is that exactly?

Obama said the Muslim prayer call was “the prettiest sound on earth.” He speaks about the Koran: “As the holy Koran tells us,” many times.

“I know civilization’s debt to Islam. It was Islam that paved the way for many centuries, paving the way to Europe’s Renaissance and enlightenment.”  Right, at the slaughter and torture of civilizations, Mr. President.

“Islam is not part of the problem in promoting violent extremism; it is an important part of promoting peace. The enduring faith of over a billion people is so much bigger than the narrow hatred of a few. Let me speak as clearly as I can. America is not and never will be at war with Islam.”

Right. That PEACEFUL religion that summarily mutilates their young women’s genitals, starting at the age of 5, maims and kills their wives with impunity, raises their children to be suicide bombers, wants to annihilate Israel and the United States, cuts off their hands when they steal, and on and on… You know, THAT religion.

If Islam is not part of the problem in promoting violent extremism, then why is ISIS bent on making everyone convert to Islam, or off with their heads? Why do they call their hostile takeover a “Holy War”?

OK, Mr. Barack Hussein Obama-maybe you were raised as a Muslim and have an “understanding” of their culture. We get THAT. But, what we DON’T GET is your overwhelming propensity to side with Islam at every opportunity, at the expense of the United States. It just doesn’t make sense. Or maybe it does, if you agree with Colonel West.