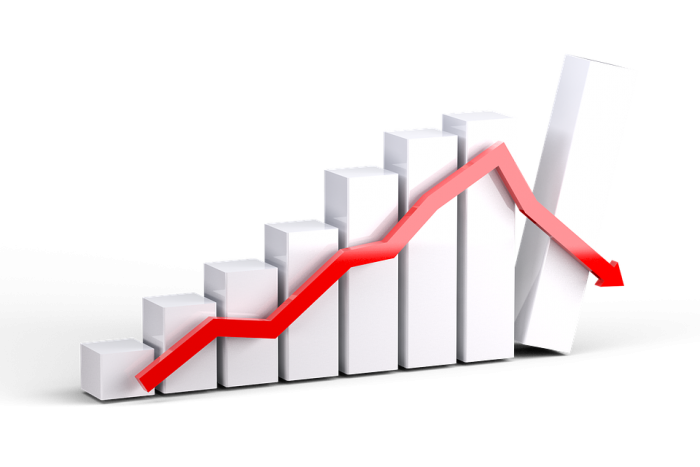 The mainstream media seems so surprised that the stock market is crashing, but the truth is that it isn’t a surprise at all. In fact, this crash is way, way overdue. If the Dow Jones industrial average fell another 10,000 points, stock prices would still be overvalued. I have been warning and warning and warning that this would happen, because stock valuations always return to their long-term averages eventually. On Monday, the Dow was down a staggering 1,175 points, which was the largest single day decline that we have ever seen by a very wide margin. In fact, it shattered the old record by nearly 400 points.

Shortly after 3 PM, all hell broke loose on Wall Street. The Dow dropped by more than 800 points in just 10 minutes. At one point on Monday, the Dow was down nearly 1,600 points, but a brief rally cut those losses roughly in half. However, the rally did not last long and stock prices collapsed hard as the market closed. At this moment, the Dow is already down more than 2,200 points from the peak of the market, and we are not too far from officially entering “correction” territory.

Once stocks start falling, it can trigger a massive rush for the exits, and that is what happened on Monday. In particular, investors started to panic once the Dow broke through the 50-day moving average…

“As soon as we broke the 50-day moving average … we saw volatility spike,” said Jeff Kilburg, CEO of KKM Financial. “It’s just been downhill from there.”

Other waves of selling were triggered once the 25,000 and 24,000 barriers on the Dow were breached. In order to protect against losing too much money, many investors have stop losses set at psychologically-important levels. The following comes from MarketWatch…

Markets almost always go down faster than they go up, and once panic begins to spread on Wall Street it doesn’t take much to create a massive stampede.

In the end, this next financial crisis will be far worse than it should have been. The Federal Reserve and other global central banks have endlessly manipulated the financial markets, and they created the biggest financial bubble in human history.

When an irrational financial bubble is growing, it can seem like things are wonderful. But all such bubbles eventually burst, and the bursting of the bubble often does far more damage than the good that was accomplished by the manipulation of the markets.

So was there anything specific that caused the panic on Wall Street on Monday?

Yes, interest rates are rising, but as Bloomberg has noted, there wasn’t really anything noteworthy in the news that triggered the selling…

While Friday’s market rout came amid U.S. wage data on Friday that pointed to quickening inflation, which would lead to higher rates and, in turn, rising borrowing costs for companies, the selling Monday came amid few major data points.

“I think sentiment was a little too optimistic,” said Brad McMillan, chief investment officer for Commonwealth Financial Network. “What was driving the market up in January? It wasn’t the fundamentals, as good as they were, it was excessive confidence.”

Ultimately, time simply runs out on all irrational financial bubbles. It is interesting to note that the Tulip price index began to crash on this exact date in 1637, and we may look back and point to February 5th as the key moment when the “financial crisis of 2018” started.

Once again, let us hope for some type of a bounce tomorrow. Often stock prices do rebound quite a bit after an enormous decline, and many are hoping that stock prices will soar on Tuesday.

But so far the news after the market closed in New York has all been bad. For example, CNBC is reporting that XIV has fallen more than 80 percent after hours…

An exchange-traded security which is supposed to be a bet on calm markets was collapsing after hours.

The VelocityShares Daily Inverse VIX Short-Term exchange-traded note (XIV) is down more than 80 percent in extended trading Monday. The security, issued by Credit Suisse, is supposed to give the opposite return of the Cboe Volatility index (VIX), the market’s widely followed turbulence gauge.

And as I write this article, it looks like markets all over Asia are going to be way down at the opening.

If stock prices keep collapsing, it could actually cause a major financial crisis. So many financial institutions are deeply leveraged today, and many of them simply would not be able to handle a stock market decline of 30, 40 or 50 percent.

In particular, if things start to really unravel it will be important to pay special attention for any mention of “derivatives” in the financial news. Once those dominoes start falling, we will see financial pain on a scale unlike anything that we have ever seen before in U.S. history.

Also, let us not forget that trouble signs continue to emerge for the “real economy”. Just today, we learned that another major retail chain has filed for bankruptcy…

Bon-Ton, whose brands include Boston Store, Carson’s, Elder-Beerman and Younkers, had been on a fast track toward bankruptcy court after it recently announced plans to close 47 of its 260 stores.

I cannot stress enough that what happened on Monday is not a surprise. The only surprise is that it took this long to happen.

Unfortunately for us, the central banks have created a bubble of such enormity that it could potentially collapse the entire global financial system when it finally fully bursts.

Let us hope for calmer markets on Tuesday, but let us also be mindful that at some point we are going to pay an exceedingly great price for years and years of horribly foolish decisions.