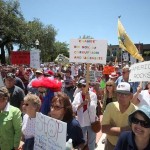 Approximately 60,000 senior citizens have quit AARP since July 1st due to that organization’s support for Obamacare.

While Americans continue to heatedly debate health care, most Americans do not realize that a significant portion of the Obamacare program has already become law.

According to a new Gallup poll, conservatives now outnumber liberals in all fifty states of the union.

Did you know that there are 6 health care lobbyists for each member of Congress?

At least a dozen people carrying guns, including at least two assault rifles, were spotted mingling among protesters outside of a convention center in Arizona where President Barack Obama was speaking.

The Obama administration has now officially stated that it wants to repeal the 1996 Defense of Marriage Act.

A new poll in the U.K. reveals that only about a third of the nurses in that nation are definitely planning to take the swine flu vaccination.

The Malaysian government may declare a national curfew in an attempt to slow down the spread of the swine flu.

The spokesman for Iran’s Supreme Leader has called on neighboring Islamic nations countries to mobilize their armed forces in preparation for the coming of the “savior of Islam”.

Are we about to experience a banking crisis of historic proportions?

The Evangelical Lutheran Church in America will decide this week whether or not to allow sexually active gay people to serve as ministers.

The New York Times has a major article out about the prosperity gospel.  Why is it that whenever they report something about Christianity it is always something negative?

Lastly, a new article in Time magazine suggests that geoengineering may be the only way to save the climate.