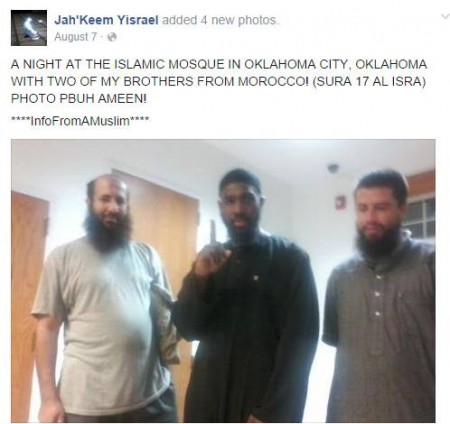 Anti-gun liberals of the world please take note – it was a man with a gun that stopped the Oklahoma beheader from beheading another woman. If a man with a gun had not been there and had not shot 30-year-old Alton Alexander Nolen, he would have finished his attack on his second female victim. And after that, Nolen would have probably kept beheading people for as long as he could before the authorities arrived. Of course this detail has been greatly played down by the reports in the mainstream media. They never want to say anything good about men with guns. But I’ll bet 43-year-old Traci Johnson sure is thankful that there was a man with a gun there to prevent her from losing her head.

The hero in this situation was an Oklahoma County reserve deputy named Mark Vaughan. But because he was a man with a gun, he is getting very little attention from the big news networks. The following is from a local news report that described what happened when Nolen went after his second victim…

At that point, Lewis claims Nolen met 43-year-old Traci Johnson and began attacking her with the same knife.

Officials say at that point, Mark Vaughan, an Oklahoma County reserve deputy and a former CEO of the business, shot him as he was actively stabbing Johnson.

“He’s, obviously, a hero in this situation,” Sgt. Lewis said, referring to Vaughan. “It could have gotten a lot worse.”

Another aspect of this incredibly disturbing incident that the mainstream media is playing down is the fact that Nolen was a radical Muslim.

Nolen was a recent convert to Islam, but it is being reported in local news reports that he zealously attempted to convert his coworkers to his new religion.

And despite the fact that his Facebook page is absolutely filled with Islamic terror material, CNN is reporting that authorities are ruling out any connection to terrorism…

While his Facebook page included images of Osama bin Laden and an apparent beheading, there’s no indication that Nolen was motivated by terrorism, a second law enforcement official said.

Of course it would not be politically correct to say that Nolen was motivated by Islamic terror, but any rational person would come to that conclusion after looking at what he had posted on Facebook.

Many of the images that he shared on Facebook are too gruesome to post in this article, but the following is one example that I can share… 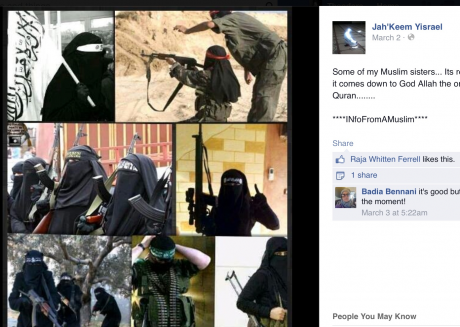 There are a lot of people out there that are eager to make apologies for Nolen and for the Islamic community that he was involved with in Oklahoma, but the truth is that Nolen got this ideology from somewhere.

Was it his local mosque? The following is reportedly testimony from an individual that has attended that mosque…

I went to the same mosque the Oklahoma Muslim who beheaded his co-worker today. I live ten minutes away!

The Imam was Imad Enchassi the last I heard. He was a friend of mine. He is a Lebanese-born Sunni who hates Israel. He once gave a sermon that the Israelis were trying to collapse al-Aqsa mosque by digging tunnels underneath it. They have no issue with Palestinian suicide bombings because, as it was explained to me, that is the only weapon the Palestinians have.

They sold Milestones in the book shop while I was there, which as you know calls for replacing all non-Islamic governments with Islamic ones. I remember listening to a tape a friend of mine, Yahya Graff, another white convert to Islam, had that prayed for the destruction of Israel and America.

The imam when I first converted, Suhaib Webb, is hailed as a moderate by liberals in the United States but he was the one that explicitly told me that according to Islam, three choices are to be given to non-Muslims: convert, pay the jizyah tax and live under Islamic rule, or jihad. They try very hard to whitewash Islam when the media is around, but they believe in their religion and the ultimate goal of an Islamic caliphate.

The ideology embraced by Nolen is utter tyranny. And it was his ideology that led him to take the actions that he did.

And is it just a coincidence that another 30-year-old Muslim in Oklahoma was arrested for threatening to behead a woman on Friday? According to media reports, he told his potential victim that beheading people “is just what we do”…

The woman said she asked him why they kill Christians and he replied, “This is just what we do,” the detective reported.

All of this comes on the heels of the decapitation of an innocent great-grandmother in the United Kingdom by a Muslim just a few weeks ago.

Look, I don’t know about you, but when Muslims start running around cutting the heads off of innocent women I am going to get upset about it.

Many liberals accuse Christians of engaging in a “war against women”, but the truth is that the real “war against women” is going on in the Middle East. Every single day, women over there are being raped, tortured and executed by crazed jihadists. Just check out the following example…

While some Democratic Party lawmakers use the “war on women” slogan to score political points, women in war-torn Iraq, Syria and other Muslim nations are being tortured, raped and murdered by Islamist terrorists, the most recent victim being human rights attorney Sameera Salih Ali Al-Nuaimy, according to reports including one from the United Nations on Thursday.

Human rights activists the world over are condemning the unimaginable torture and cold-blooded public execution by members of the Islamic State of Iraq and Syria (ISIS) of the legal services volunteer, Sameera Salih Ali Al-Nuaimy, an attorney who worked pro-bono for the human rights of Iraqi women.

But the same liberals that love to point their fingers at American Christians are extremely hesitant to ever say anything negative about Muslims. If pressed, they will say that these kinds of acts do not represent “true Islam” even though violent jihad is being taught to hundreds of millions of Muslims in mosques all over the planet.

With each passing day, our world is getting a little bit crazier.

And sadly, there are going to be more psychopaths like Alton Alexander Nolen that want to commit unspeakable acts against innocent people.

Hopefully if someone like Nolen ever comes after you or a member of your family, there will be a man (or woman) with a gun there to stop him.