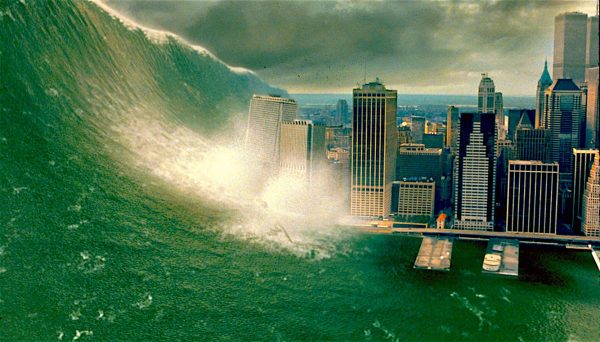 I had these dreams one night at the end of July. My name is Alex Rau and I am 22 years old. I live in Eugene, Oregon.

I am a follower of Christ.

“I was in a tall building. Not a skyscraper though. I was with who I knew were friends and acquaintances, I only remember one of their names, my good friend Thomas.

I was looking out the window, out at a huge bay of water with a bridge in the horizon ( I didn’t think it was SF Bay at the time but looking back it seems that it was, especially because of the bridge). The building I was in was no more than 100 yards from the bay.

Everyone on that floor, was discussing something, looking for something. It seemed that everyone was on edge. I looked, everyone else looked at the windows and saw a wave coming, this was NOT a cresting beach wave. It seemed like a layer of water was rushing over the top the bay. It looked like the classic tsunami that we have all seen videos of. The layer of water got closer and closer until it finally reached the shores of the bay and water began to rush inland. I could see people down on the streets being swept away. Cars, garbage, anything loose was being grabbed by the oncoming water. I could hear the building that I was in creak and groan and sway just the smallest amount.

The people I was with INSISTED on leaving. They were fearful of staying. I don’t know how they left but they did. Me and my friend Thomas decided to stay behind. Thomas noticed the next wave first which was seen across the bay, behind the bridge. This wave was about 10x higher. It was tall enough to just barely miss the bridge as I watched it do so. I instantly knew we would die. I felt ultimate dread. I should have left, why did I stay after the first wave? I felt as though I was stupid for not taking the first wave as a warning. My stupidity has cost me my life, and Thomas’s as well. I was not fearful of death as I know Jesus, but I knew Thomas was an atheist. With no beliefs in God what so ever. I felt my stupidity has murdered his soul.

The sadness I felt in this dream was some of the most powerful sadness I have ever felt in my life, the degree of emotion in the situation were intense to say the least.(I like to think of myself as a “macho” guy lol and suppress and deny my emotions but this was a whole other story).

I looked at him and said, “this is God’s will.” That’s all I said. The wave hit our building and the floor we were on was about 2-3 floors above the highest part of the water. The building instantly began to shake and sway much harder than it did before. This time I could hear beams and windows and walls cracking. A building next to us had already begun to fall. This violence that the building was experiencing occurred for about 10 minutes as more and more water came rushing in from the bay.

At one time I remember thinking and saying to Thomas, “Maybe we wont die”. “Maybe we will actually survive this”. Before I knew it the building began to crumble, I knew the building was falling because I felt the free fall and butterflies that you get from it. I grabbed my buddy’s hand and held on. I told him this needs to happen to just trust God’s will.

I remember thinking that I hope to get crushed to death or hit my head on something so I wouldn’t be conscious while inhaling water and drowning on water/vomit. I fell into the water and it seemed like a non stop churning sensation. I didn’t hit my head, I wasn’t crushed. I entirely remember drowning. It was so painful. Then I woke up. Astonished.

The dreams brewed in my mind and were there like a permanent stamp.I truly felt as though this dream had a message from God. I looked online to see if there were others with these dreams or scientific predictions of earthquakes and tsunamis. I have never heard of Bill Weather before that but I was quite amazed when I stumbled across his Youtube page. There was nothing in my dream specifying a date. A.C. Griffith has also predicted an earthquake to occur in the near future.