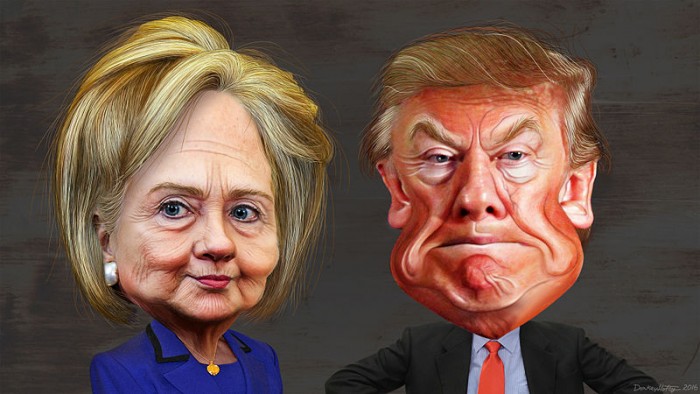 It is going to take a miracle of Biblical proportions for Donald Trump to win the election now. If nothing changes between now and election day, Hillary Clinton is going to win in a landslide. Out of all the candidates that were running for president this election cycle (including third party candidates), a Hillary Clinton presidency would be the worst possible outcome, but it appears that is precisely what we are going to get. The 2005 recording in which Donald Trump admits that he used his celebrity status to grope women would instantly kill the career of a normal politician, but Donald Trump is no normal politician. In essence, he admitted to being a sexual predator, and there is no way that you can spin that to make it acceptable. Of course these comments were made 11 years ago, and Trump is a different man now, but that isn’t going to matter much to the mainstream media or to a large portion of the American public. No matter what you or I may think about this, the cold, hard reality of the matter is that he is going to lose a lot of votes over this, and those were votes that he desperately needed if he hoped to defeat Hillary Clinton in November.

Since this recording came out, Trump has lost an incredible amount of support within his own party. At this point, 73 prominent Republicans have either publicly attacked him or have announced that they will not be voting for him in November.

The release of this recording came at almost the perfect time for the Clinton campaign. There is less than a month to go until election day, and this recording will be played over and over and over again between then and now. If it had been released earlier, the effect of the scandal would have likely faded before election day, and if it had been released just prior to election day there would not have been enough time for everyone in America to be exposed to it.

If Donald Trump can come back from this and win the election, it will be the greatest political miracle of all time.

For those that still are not familiar with this recording, you can find it along with the Washington Post article that originally broke this story right here. The things that Trump said are truly disgusting, and his remarks are too dirty to be reproduced in this article.

According to a different Washington Post article, producers at Access Hollywood only just recently started looking through their archives for past interviews with Trump…

NBC News first became aware of the footage late Monday after receiving notice from producers at “Access Hollywood,” a syndicated entertainment-news program owned by NBC. The program’s producers had combed their archives for interviews with Trump after reading an Associated Press account of crude remarks he had made about female contestants on “The Apprentice,” the NBC reality program that Trump had starred on for 14 seasons.

I find this highly suspicious. Trump has been the biggest story in politics for more than a year, and Access Hollywood only started searching their archives for Trump material just a few days ago?

If you believe that, then I have a very large bridge on the west coast that I would like to sell you.

After the tape was supposedly “discovered”, it was then subsequently leaked somehow to the Washington Post, but NBC News says that they have absolutely no plans to investigate how the tape was leaked.

This doesn’t smell right either. Unless you are negligent to the extreme, you definitely would want to know who is leaking your biggest news stories to your competitors.

Personally, I have a feeling that this was discovered a long time ago and was held back so that it could be an “October surprise”. I cannot prove this of course, but that is my gut feeling.

And even worse material could still be coming. In fact, a former producer on The Apprentice says that Donald Trump said “far worse” things on that show than were on the recording that was just released…

Following Friday’s release of audio in which Trump bragged about kissing and grabbing women without their permission, Bill Pruitt, a former producer on the show, said that there are “far worse” comments Trump made on tape.

“NBC had tape 11 yrs. Apprentice producer says they have more & worse. So why not release in 2015? In March? Why wait till October? #MSMBias” Cruz tweeted, referencing supposed bias towards Trump in the mainstream media.

Ted Cruz made an interesting point, but those tapes are actually not owned by NBC. They are owned by Mark Burnett, and so they might not ever be released.

Before we get to the Clinton crimes, I also want to point out that the other voice on the infamous recording that has been released belongs to Billy Bush.

And Billy Bush just happens to be related to George H.W. Bush, George W. Bush and Jeb Bush. The following comes from CNN…

Is he really…? Yes. Billy Bush is a member of that Bush family.

So after everything that has been said and done, it looks like the Bush family is going to get their revenge on Donald Trump.

It is also interesting to note that Billy Bush will not face any punishment from NBC for what he said on that tape.

There was some talk in Republican circles of trying to replace Donald Trump, but the rules make it virtually impossible to remove a nominee. And early voting has already begun in some states, and so it is pretty much too late to do something even if Trump was inclined to willingly step down.

At this point, the only option that Trump has left is to show the American people that the crimes of the Clintons are substantially worse than anything that he has ever done or said.

And in the aftermath of this Trump scandal, some of Bill Clinton’s accusers are publicly speaking out once again. For example, Juanita Broaddrick is being very bold about the fact that Bill Clinton raped her…

Bill Clinton rape accuser Juanita Broaddrick is weighing in on Donald Trump’s controversial comments from 2005 that are mysteriously resurfacing just hours before the second debate and weeks before the general election.

“How many times must it be said,” she tweeted Saturday morning.

And Breitbart is currently featuring an extended interview with Broaddrick that is absolutely stunning. The following is a short excerpt…

I was completely dressed. I had a skirt and a blouse. He tore the waist of my skirt. And then he ripped my pantyhose. And he raped me. It was very vicious. I was just pinned down… I did not know what to do. I was so frightened. I was only 35 at the time. And it was horrible. I just wanted it to be over with. So he would go away.

KLEIN: He got up?

BROADDRICK: No, he held me down for a long time. And then he did it again. I was so ready for him to leave me alone. When he started raping me again. And it was very brief… And he did get up and he straightened himself. And my mouth was bleeding and it was hurting. And he just straightens himself and goes to the door.

KLEIN: With you still on the bed?

BROADDRICK: Yes, crying. He straightens himself and he goes to the door. And puts on his sunglasses. And tells me to get some ice on that on my list. And goes out the door.

Hillary Clinton has a long list of sexual skeletons in her closet as well, but the mainstream media won’t touch them with a 10 foot pole.

In addition to the things mentioned above, here is a list of 18 other Clinton scandals that Donald Trump needs to bring up if he has any chance to winning this election…

8. Using the IRS to target their enemies during the Clinton administration

Do you know how quarterbacks “take a knee” at the end of football games to run out the clock when their teams are winning?

Well, the Clinton campaign is almost at that stage.

Unless we see some sort of a complete and utter collapse, Hillary Clinton is on course to cruise to victory.

The only chance that Donald Trump has of winning now is to somehow show America that the Clintons are much worse than he is. There are decades of skeletons that Trump could dredge up if he is inclined to do so, and the American people definitely deserve to be exposed to the truth about the Clintons.

If Trump just sits back and tries to “focus on the issues”, Clinton will keep hammering him with this newly revealed recording over and over, and Trump will get absolutely destroyed on election day.

That may not sound fair, but this is how the game of politics in America is played.

2 thoughts on “After This October Surprise, Donald Trump Only Has One Option Left: Expose The Clinton Crimes”