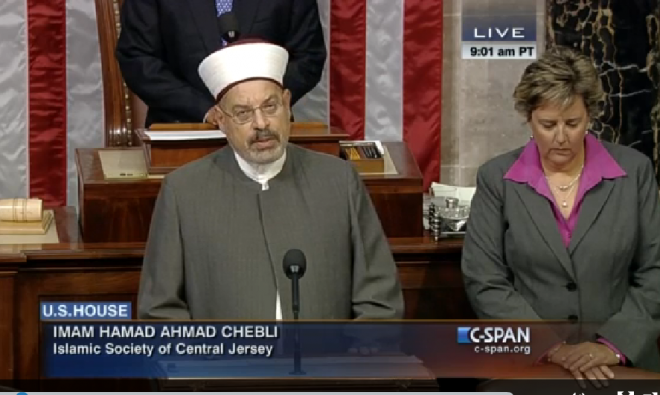 An abomination of sacrilegious proportions was witnessed Friday when the National Cathedral allowed Muslims to hold an Islamic prayer service within its dwelling.

Islam has overstepped its boundaries in a Christian nation of 73 percenters, and it’s getting progressively worse. Openly infiltrating our houses of government with blasphemous declarations to a false god, the particular people bowing their heads in reverence will disturb and anger you.

With the re-election of Speaker of the House John Boehner and fellow Republicans gaining majority in Senate comes an outrageous display of submission to Islam.

The Imam for the Islamic Center of Central Jersey (mosque) Hamad Chebli delivered an Islamic prayer praising Allah from the House floor November 13, while Boehner and other House Republicans bow their heads in agreement and respect.

Perhaps the most disturbing line from Chebli’s prayer is his declaration that America recognizes Allah as their god, saying “Thee do WE worship.”

2 thoughts on “Allah ‘The Most Gracious, The Most Merciful’ Praised on US House Floor, Reps Literally Bow to Muslim God”