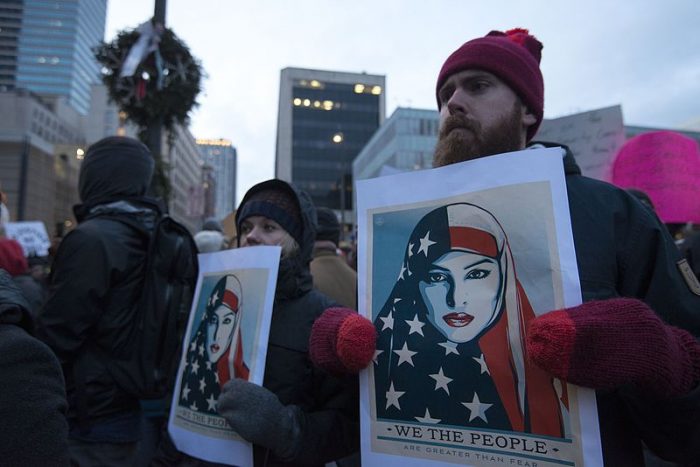 An “unholy alliance” between anti-Trump leftists and radical Muslims is beginning to emerge all over America.  President Trump’s recent executive order that restricted immigration from seven predominantly Muslim countries is bringing a very strange mixture of people out to street protests.  On the one hand you have hardcore Muslims that are chanting “Allahu Akbar” and that believe that Islamic law will someday prevail over the U.S. Constitution, and on the other hand you have radical leftists marching right next to them that are protesting for “women’s rights”, “gay rights” and “civil rights”.  The ironic thing about all of this is that if the radical Muslims have their way, the leftists will either convert to Islam someday or will be completely destroyed.  But for now they need one another, and so a very odd marriage of convenience has taken place.

Later on in this article I want to discuss the very unusual “I Am Muslim Too” protest that just took place in Times Square in New York City, but first I want to talk about what happened when the Nation of Islam held their annual meeting in Detroit over the weekend.  It is being reported that thousands of people in the audience were enthusiastically chanting “Allahu Akbar” as Louis Farrakhan made his way to the stage, and Farrakhan made it abundantly clear to those assembled that he plans to oppose Trump every step of the way…

Farrakhan then said: “Maybe so. Who cares? We don’t give a damn what he likes or what he doesn’t like.

“Have no fear … the future is ours. Time for the liberation of our people.”

Perhaps it is not much of a surprise for thunderous chants of “Allahu Akbar” to be heard at a Nation of Islam conference, but you definitely wouldn’t expect to hear the same thing in Times Square in New York City.

But that is precisely what happened on Sunday.  According to the Daily Caller, an Islamic call to prayer during the “I Am Muslim Too” protest included the familiar phrase…

Hip-hop mogul Russell Simmons organized the protest meant to declare “Today, I am a Muslim, too,” and protest Trump’s travel ban on some majority-Muslim countries.

Simmons said in an open letter, “My friends, both Muslims and Jews, are saying there are so many comparisons between your rap and Hitler’s, and I cannot disagree with them, Donald.”

This protest attracted a large number of non-Muslim leftists, and when the Muslim call to prayer began the entire crowd became very, very quiet.  If you have not seen footage of this yet, you can find it on YouTube right here…

On the one hand you can understand that they were trying to be respectful, but on the other hand one can’t help but imagine how the leftists would have responded if Christian prayers had started to come through the loudspeakers.

This protest was just the latest example of how the radical left and radical Muslims are coming together for a common purpose even though their worldviews are diametrically opposed to one another.  In Islam, a separation between religion and government in unthinkable, and so ultimately you would think that for leftists radical Islam would be considered to be their worst nightmare.  But instead, many of them embrace radical Islam because they think that it makes them look “tolerant”.  The following comes from Paul Joseph Watson…

The clip shows left-wing protesters in hushed reverence as they listen to the call to prayer in Times Square while some hold up images of artist Shepard Fairey’s design of a woman in an American flag hijab.

“Allahu Akbar” means “God is great” or “Allah is greater” in Arabic, but it’s better known to westerners as a slogan routinely shouted by jihadists as they massacre innocent people during terrorist attacks.

The event included a speech by Linda Sansour, a Muslim activist and Hamas sympathizer who advocates for Sharia law – a brutal Islamist doctrine that completely disenfranchises women.

This is a pattern that we have seen for quite some time now.  A month ago at the inauguration of Trump, some of the protesters were reportedly displaying ISIS flags and beheading videos in an attempt to freak out Trump supporters.

The radical left and radical Islamists are proudly working together right now because they have a common enemy in Donald Trump.

But would the radical left actually want sharia law to be introduced in this country?

Unfortunately, many among the radical left are completely uneducated about Islam and sharia law.  In this very disturbing YouTube video by Mark Dice, a number of leftists actually indicate that they would be in favor of sharia law being implemented even though they appear to have no understanding of what that would actually mean…

When you watch videos like that one, it is easy to wonder what the future of our nation is going to look like with a public that is so incredibly uninformed.

If you ever have any doubts about how evil radical Islam truly is, just sit down and listen to author Brigitte Gabriel for about five minutes.  She goes around the country telling people how radical Islam absolutely destroyed her home country of Lebanon.  Decades ago Lebanon was one of the most peaceful, stable and prosperous nations in the entire Middle East, but then the radical Islamists moved in and turned it into a war-torn hellhole.

And the truth is that this happens wherever the radical Islamists go.  Just look at Sweden.  At one time Sweden had one of the lowest crime rates in Europe, but now rioting and looting are breaking out everywhere and Malmo has become the most dangerous city in all of western Europe.

So the radical left may want to be very careful, because the people that they are cozying up to right now believe that someday they are going to be able to completely destroy our way of life.