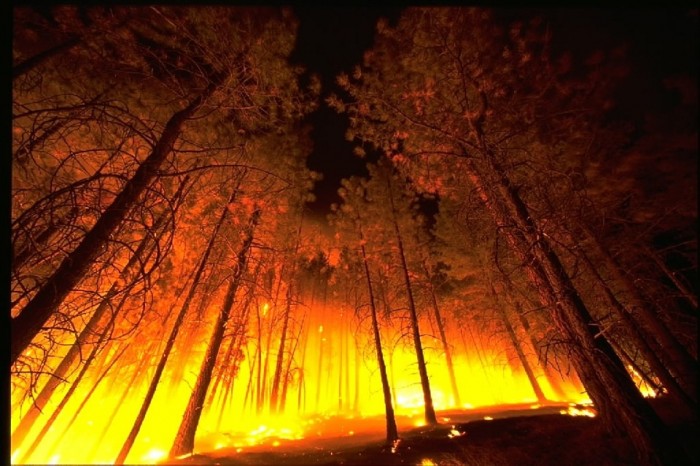 It is starting to look more than just a little bit “apocalyptic” out there. If you follow my work closely, you already know that weather patterns in the United States have been going absolutely crazy and that last year was the worst year for wildfires in all of U.S. history. Well, this week things have gotten even worse. A “heat dome” has brought triple digit temperatures to much of the country, and an “unprecedented” wildfire is ripping through the hills north of Los Angeles “like a freight train“. The so-called Sand Fire started on Friday, and since that time it has been burning 10,000 acres a day. An acre is approximately the size of a football field, so that means this fire has been burning the equivalent of 10,000 football fields every single day, and it is only “10 percent contained” at this point.

According to the latest count more than 51 square miles have been burned by this voracious fire, and on Sunday smoke from the fire could be seen 270 miles away in Las Vegas. Nearly 3,000 firefighters are currently battling the blaze, but the fire still seems to have the upper hand.

At least one “charred corpse” has been found so far, and officials are hoping that other nearby residents are heeding their calls to evacuate. Fires of this nature are extremely serious, and they can move with astonishing speed when the conditions are right.

This five year drought is the worst multi-year drought in the recorded history of the state of California, and such dry conditions are ideal for wildfires. Normally we don’t see “explosive” wildfires of this nature until later in the year, and that is one reason why authorities are describing what we have seen up to this point as “almost unprecedented”. The following comes from NBC Los Angeles…

“This fire, what we’ve seen in 72 hours, is almost unprecedented,” said Los Angeles County Fire Department Battalion Chief Dennis Cross. “We’d have to go back a long way to compare a fire to this. And, we’re not through with this thing yet.”

Some of the terms that are being used in the mainstream media to describe this fire are “extreme”, “ferocious” and “like a freight train”. Without a doubt, nobody should be underestimating the seriousness of what is taking place in northern Los Angeles County right now…

Flames raced down a steep hillside “like a freight train,” leaving smoldering remains of homes and forcing thousands to flee the wildfire churning through tinder-dry canyons in Southern California, authorities said Sunday.

The fire that has destroyed at least 18 homes in northern Los Angeles County gained ferocious new power two days after it broke out, sending so much smoke in the air that planes making drops on it had to be grounded for part of the afternoon.

“For this time of year, it’s the most extreme fire behavior I’ve seen in my 32-year career,” County fire Chief Daryl Osby said.

Nearby residents are posting plenty of photos from this fire on Facebook and Twitter, and some of these photos look quite apocalyptic. Even with all of our advanced technology, this kind of thing can still happen in the United States of America today, and it shows us that we are not quite as “all-powerful” as we would like to think.

there is ash everywhere outside. literally looks like the apocalypse in southern California #SandFire pic.twitter.com/VDYttAqUGu

Meanwhile, another brutal heat wave continues to march across the country. Washington is the only one of the lower 48 states not to be hit by at least 90 degree heat, and many areas of the country have now had several days in a row when temps have soared into the triple digits. The following comes from the Daily Mail…

An oppressive ‘heat dome’ that has brought triple-digit temperatures across the US – leaving more than 100 million people to find ways to cool off – has been blamed for at least 11 deaths.

Temperatures have soared above 100F for days and the heat wave is expected to continue Monday in cities including New York, Washington, DC and Philadelphia as it hosts the Democratic National Convention.

Personally, I find it very interesting that this “heat dome” is striking Philadelphia on the exact day when the Democratic National Convention is opening.

Perhaps this is just another one of those “strange coincidences” that we have been witnessing in recent months.

We live at a time when global weather patterns are starting to spin wildly out of control. For instance, just check out what has been happening in China lately…

Some 8.6 million people have been affected by destructive floods and landslides caused by heavy rain in China, local media report. Officials said that at least 154 people have been killed and the death toll is likely to rise.

The worst-hit was Hebei province in northern China, Xinhua news agency reported. Some 52,000 homes collapsed in the area. Hebei has about 73 million residents.

At least 114 people have been killed and 111 are still missing in the province, according to the People’s Daily newspaper.

-The worst year for wildfires in all of U.S. history

-The worst stretch of historic floods America has ever seen

Is this all happening by accident, or is there some explanation that ties all of these things together?

In my latest book, I talk about how the Bible says that we should expect extreme weather, increased seismic activity and major earth changes during the time just before the return of Jesus Christ.

So nothing that is happening right now should take us by surprise.

In fact, what we are dealing with at the moment is likely just the tip of the iceberg.

Great chaos is coming to our planet, and rapidly shifting weather patterns and unprecedented seismic events are going to have a dramatic impact on all of our lives.

Unfortunately, most people are still busy snoozing away, and so they are not taking practical steps to get prepared for what is quickly closing in on us.