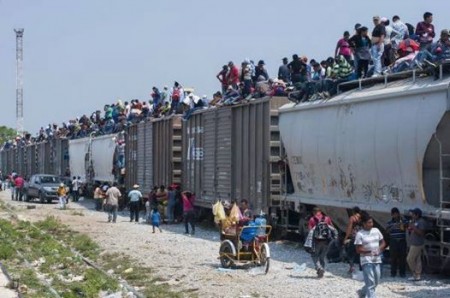 Thousands of illegal immigrants are flooding the U.S.-Mexico border and the problem isn’t likely to get better anytime soon. In a mad dash to make it to the U.S., many of the Latino minors are hopping aboard a network of Mexican freight trains called “El Tren de la Muerte,” or Death Train. The phenomenon may support claims that the Obama Administration’s lax stance on immigration is encouraging thousands of children to put their lives at risk.

Children who travel via Death Train must jump onto a moving freight car. Minors who cannot successfully pull themselves onto the traveling cars fall onto the tracks–many are left with extreme injuries.

Erica Dahl-Bredine, an El Salvador representative for Catholic Relief Services, told the Colorado Gazette that those who get injured on the train tracks often return home. She added, “The couplings between the cars are notoriously dangerous. I see children who have lost an arm and a leg or both legs.”