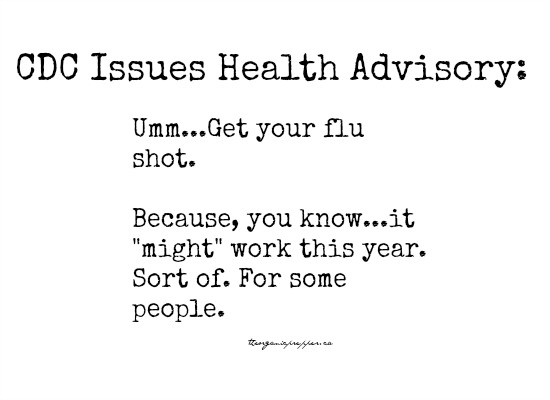 You know how the propaganda machine loves to crank up the push on flu shots every year. Well, this year’s batch is so ineffective even the notoriously optimistic CDC and pro-Pharma mainstream sources can’t tell you that you’re protected with a straight face.

The Center for Disease Control (and Big Pharma Pimp Extraordinaire) released an advisory yesterday letting us know that the vaccine is not really a very good match to the flu circulating this year. (The emphasis below is mine).

Influenza viral characterization data indicates that 48% of the influenza A (H3N2) viruses collected and analyzed in the United States from October 1 through November 22, 2014 were antigenically “like” the 2014-2015 influenza A (H3N2) vaccine component, but that 52% were antigenically different (drifted) from the H3N2 vaccine virus . In past seasons during which predominant circulating influenza viruses have been antigenically drifted, decreased vaccine effectiveness has been observed. However, vaccination has been found to provide some protection against drifted viruses. Though reduced, this cross-protection might reduce the likelihood of severe outcomes such as hospitalization and death. In addition, vaccination will offer protection against circulating influenza strains that have not undergone significant antigenic drift from the vaccine viruses (such as influenza A (H1N1) and B viruses). (source)

Even though it doesn’t really work, the CDC is adamant you should still get the flu shot. Because, you know. It “might” work for you. As persuasive as they are with that whole “might” business, I think we’re going to have to opt out of injecting the following ingredients:

Incidentally, despite their resounding lack of confidence in the vaccine, in the very same advisory in which the CDC admitted this year’s vaccine is largely ineffective, they passed on these words of medical wisdom to healthcare professionals:

CDC is reminding clinicians of the benefits of influenza antiviral medications and urging continued influenza vaccination of unvaccinated patients this influenza season. (source)

Never ones to miss a marketing opportunity, the CDC urges you to immediately go to the doctor and spend some money on more questionably effective Big Pharma drugs if you think you might have the flu.

Because of the detection of these drifted influenza A (H3N2) viruses, this CDC Health Advisory is being issued to re-emphasize the importance of the use of neuraminidase inhibitor antiviral medications when indicated for treatment and prevention of influenza, as an adjunct to vaccination. (source)

You know, because the first toxic product they gave you didn’t work, you should spend money on other toxic products that don’t work.

Tamiflu is one of the antivirals they recommend. The drug is advertised as something to shorten the term and severity of the illness.  “Tamiflu is an FDA-approved prescription flu medicine that attacks the flu at its source. Tamiflu doesn’t just treat the symptoms of flu that make you feel bad. Tamiflu fights the flu virus itself.”  According to their website:

The most common side effects of Tamiflu are mild to moderate nausea and vomiting.

People with the flu, particularly children and adolescents, may be at increased risk for seizures, confusion, or abnormal behavior when they first get sick. These events may occur when the flu is not treated or right after starting Tamiflu. These events are uncommon but may lead to accidental injury. Contact a healthcare professional right away if you notice any unusual behavior.

This links to a PDF of prescribing information for doctors, which tells a slightly more alarming story:

WARNINGS AND PRECAUTIONS ———————–
 Serious skin/hypersensitivity reactions such as Stevens-Johnson
Syndrome, toxic epidermal necrolysis and erythema multiforme:
Discontinue TAMIFLU and initiate appropriate treatment if allergic-like
reactions occur or are suspected. (5.1)
 Neuropsychiatric events: Patients with influenza, including those receiving
TAMIFLU, particularly pediatric patients, may be at an increased risk of
confusion or abnormal behavior early in their illness. Monitor for signs of
abnormal behavior. (5.2)

A leading natural health website, Mercola.com, claims that the research on Tamiflu is flawed.  According to an article by Dr. Mercola, the limited benefits do not outweigh the risks, particularly for children:

Back in 2008, the FDA started reviewing reports of abnormal behavior and disturbing brain effects in more than 1,800 children who had taken Tamiflu. The symptoms included convulsions, delirium and delusions. In Japan, five deaths were reported in children under 16 as a result of such neurological or psychiatric problems. Seven adult deaths have also been attributed to Tamiflu, due to its neuropsychiatric effect.

According to a 2009 study, more than half of children taking Tamiflu experience side effects such as nausea and nightmares. Other more rare and bizarre side effects have also been reported, such as the case of a 19-year old British girl who developed toxic epidermal necrolysis and blindness after taking Tamiflu last year.

So, for an estimated 1.3 days less of sick-time, you run the risk of neuropsychiatric side effects, delusions, convulsions, nausea, vomiting and life-threatening skin allergies.  Plus, it costs $115-$200 for a course of the drug.

has been proven in studies to reduce the time you are ill with the flu without all of the potential side effects of the chemical cocktails created by the pharmaceutical industry. (You can learn more about elderberry extract and how it works HERE.) For some strange reason, though, the CDC doesn’t mention this natural, scientifically proven remedy though. Maybe because you can get it yourself and it’s a fraction of the prices and Big Pharma doesn’t own it and there’s no huge mark-up and by golly, Papa Pharma needs a new pair of Gucci loafers…I think you can see where I’m going here.

Back to the CDC’s announcement about the ineffectiveness of the flu shot: CBS News medical contributor Dr. Holly Phillips talked about today’s press release from the CDC:

“It’s not going to be as effective as it has been in previous years…Basically, what the CDC found was that the predominant strain circulating right now is one called H3N2, and just under half of the samples that they tested were a good match with the vaccine. What that means is that the virus has shifted, or what we call viral drift. It’s mutated in some way…Also with H3N2, even if it’s not a perfect match, you might still get some coverage. You might get the flu but you might not be as sick.” (source)

Gosh, there’s an awful lot of “mights” in there.

What are the best ways to avoid catching the flu?

I think I “might” just choose to prevent the flu by using common sense practices like these:

The absolute, number one way to avoid catching the flu is through the exercise of good personal hygiene.

If your local area is being hit hard by the flu, practice avoidance to keep your family healthy.

9.  Stay home as much as possible. (Obviously, if you have work and school outside the home, this become more difficult, but you can still avoid malls, movie theaters, and sporting events for the duration of the epidemic.)
10.  Stay away from sick people if you can.
11.  Avoid eating at restaurants – you don’t know the health or hygiene habits of the kitchen staff.

If someone in your family gets sick, take steps to minimize the spread of the illness.

12.  If you or a family member become sick, stay home from work or school to prevent passing it on to others.

13.  If a family member is sick, keep them isolated from the rest of the family.

15. Immediately place dishes and flatware used by the sick person into hot, soapy dishwater with a drop of bleach in it.

16.  Teach children to cough into the crook of their arm instead of covering their mouth with their hands. This prevents their hands from being germ catchalls that transfer contagious matter to everything they touch.

17.  Have the sick person wash their hands frequently with soap and water to help prevent spreading germs through physical contact. If soap and water are unavailable, have them use hand sanitizer.

Some other ways to stay healthy are to use natural strategies to maximize your immune system.

18.  Drink lots of water to keep your system hydrated and efficient.

19.  Take a high quality, organic multi-vitamin. (I like this one

21. Other important immune-boosting vitamins are Vitamin C and Zinc. Most vitamin C is genetically modified, so be especially carefully to find a non-GMO vitamin C

are good tasting and high quality.

21.  Eat a diet high in fruits and vegetables (preferably organic and pesticide free).

22.  Get 7-9 hours of sleep per day – a tired body has a weaker immunity against viruses.

23.  Don’t smoke – this weakens your resistance against respiratory illnesses and worsens the effect on your body if you do become ill.

25.  Avoid or limit processed foods. Your body doesn’t recognize these as food and they do nothing to nourish you.

26. Get fresh air and sunshine as often as possible – your body absorbs Vitamin D from the sun’s rays.

27. Get at least 20 minutes of exercise a day. You don’t have to be training for a marathon – simply take the dog for a quick walk and you’ll improve your cardiac function, your circulation, and your respiratory function.

28. Choose personal care and cleaning products that don’t contain harmful chemicals. When you inhale the toxins into your lungs or absorb them through your skin, they can break down mucosal surfaces, making you more susceptible to germs and viruses.

30. Try to reduce the stress in your life. When we are highly stressed,we’re far more likely to succumb to illness. This is because adrenaline and cortisol, in the long term, can drain your immune system, making it unable to fight off a cold or flu efficiently. Check out this natural product to help with stress and anxiety

When the results are so bad that even the CDC has to back down from their authoritative stance of “The best way to prevent getting the flu is to get the flu shot” to “well, you should get it because it might work” that’s a pretty darned good indication that rolling up your sleeve for a flu shot is going to do nothing to improve your health.