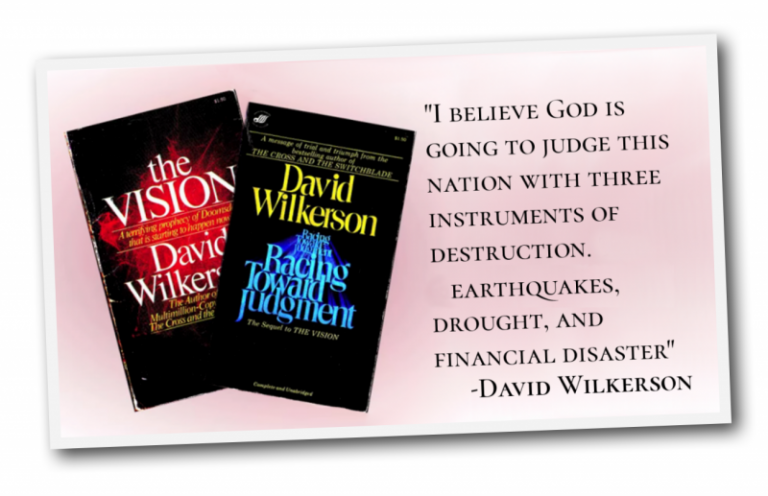 In 1973, David Wilkerson had a vision of five major calamities striking America and the world.

In 1976, he focused on the events affecting the USA.

He wrote: Right now America is racing toward judgment. Already this nation is facing punishment for its sins and debauchery. We are experiencing only “the beginning of sorrows,” but soon this entire nation will drink of God’s cup of wrath.

I believe God is going to judge this nation with three instruments of destruction. The are earthquakes, drought, and financial disaster.

There will be unbelievable, unnecessary, uncontrollable violence. The violence that had been seething beneath the surface for years will explode. No city street will be safe. The aftermath of it all is an outbreak of raping, murdering, and burning. (There will be one thousand fires burning in NYC.) The entire nation will tremble with economic and social upheaval.

The fall of New York City will be but the first tolling of the bell of divine judgment. One bad report will lead to another. Europe, Asia, and Russia will quake in fear at the news coming out of this judgment zone. World money markets will go wild.

Investment markets around the world, oil cartels, multinational corporations, and all others will be thrown into a state of helpless bewilderment and economic confusion. The stock market will plunge again. This nation is headed for runaway inflation… What worked before to take the steam out of inflation will this time only be fuel for the fire.

A second judgment zone will be stricken with drought. Long, tragic drought. Rivers and streams will dry up. Water tables will no longer support irrigation systems. Crops will wither and die in the fields. Winds will carry away topsoil, and this nation will suffer its worst dust bowl in all its history.

The threat of major food shortage in the United States will cause a wave of hoarding. Flour, dried foods, sugar, rice, beans, and canned foods will skyrocket in price. Supermarket shelves will be emptied of staple items. The price of dried foods will eventually quadruple. People will be prepared to kill in defense of their hoarded food supplies. Prayer meetings and days and weeks of prayer will not break this drought. God will not permit unrepentant men to escape judgment by simple mouthing meaningless calls for relief. This drought will fall upon the just and unjust. Everyone’s lifestyle will be affected.

God has appointed the instrument of killer earthquake as His most ominous weapon of judgment. It will strike suddenly, without warning. In less than two minutes on God’s judgment clock, the death angel will claim the lives of multiplied thousands over a radius of hundreds of miles. Mountains will tremble and cities will fall. “Quake-proof” buildings will crumble like sand castles. Power lines will crack like toothpicks. Mountain-pass roads of escape will be blocked. Water mains will break. Cars and houses will sway like toys tossed about. Dams will burst and flood tides will carry many to their doom. This earthquake could be the most destructive in the world’s history. (I believe it will stretch from Canada to Mexico.) Devastating aftershocks will follow, with hundreds of tremors hitting almost daily for months. A series of minor earthquakes will precede the major killer quakes. One of moderate magnitude will strike, with moderate damage, and many will be relieved that a massive quake did not happen. But it will follow, most assuredly.

This is only a summary of what Wilkerson saw and wrote about. Right now, reports of tremors in the central USA are reported daily, with increasing earthquake risk. The extensive western drought is growing worse by the day. And, the full effects of the 2008 recession has only been delayed by excessive money printing and outrageous deficient spending. In an October 2008 message David Wilkerson stated, “There may still be a short respite from the financial crisis–but it would be a mercy call to repentance, both to a wicked society and to an apathetic church.” Wilkerson’s books are now about forty years old, but what he says in relevant, and now seems to be just around the corner. Get these books for yourself, and don’t be spiritually unprepared. And surviving what’s coming is more than just preserving your flesh.