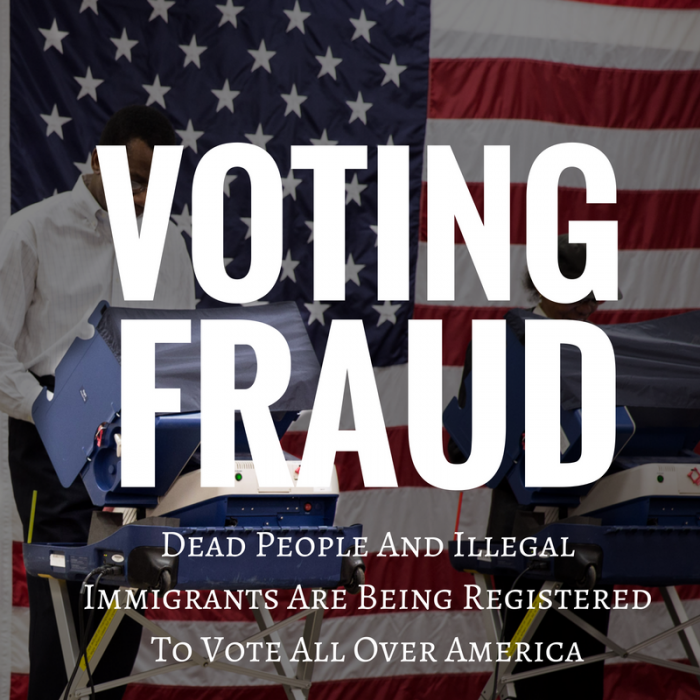 Without free and fair elections, what hope is there for the future of America? The integrity of our voting process is of the utmost importance, and yet so little attention is being paid to it. Later this week I am going to share some documented facts about voting fraud during the 2012 election that most Americans have never even heard about, and it is absolutely imperative that we don’t allow this kind of funny business to happen again this time. Today, I am going to share some examples of how dead people and illegal immigrants are actually being registered to vote all over America. Despite very strong and very angry denials by the mainstream media, the truth is that election fraud is absolutely rampant in this country, and when someone tries to steal an election they are committing a crime against all of us.

Let’s start with what just happened in Virginia. A college student at James Madison University is under investigation for registering 19 dead people to vote so that he could vote for Hillary Clinton a whole bunch of times…

Just yesterday we wrote about an FBI investigation into potential voter fraud in the critical swing state of Virginia after it was revealed that 19 dead people had recently been re-registered to vote (see “FBI Investigating More Dead People Voting In The Key Swing State Of Virginia“). While the Washington Post caught wind of the investigation, it was not known who was behind the operation…until now.

Meet, Andrew Spieles, a student at James Madison University, and apparently “Lead Organizer” for HarrisonburgVOTES. According to the Daily News-Record, Spieles confessed to re-registering 19 deceased Virginians to vote in the 2016 election cycle.

While this should come as a surprise to precisely 0 people, Spieles just happens to be Democrat who, accorded to a deleted FaceBook post, apparently recently ran for Caucus Chair of the Virginia Young Democrats.

In recent weeks I have been researching election fraud extensively, and almost every time it involves Democrats. Perhaps they take lying, cheating and stealing a lot less seriously than Republicans do. This student at James Madison University was caught when a note congratulating a deceased veteran for registering to vote was sent to his family. The following comes from the Washington Post…

One case came to light after relatives of a deceased man received a note congratulating him for registering, Rockingham County Commonwealth’s Attorney Marsha Garst said Thursday.

“His family members were very distraught,” said Garst, who confirmed the existence of the FBI and police investigation but said she could provide few details because the case is ongoing.

Of course there are lots of other examples of this kind of thing happening around the nation. In the swing state of Colorado, an investigation has uncovered a “very serious” pattern of dead people actually casting votes in multiple elections. One has to wonder how long this has been going on…

Local officials in Colorado acknowledged “very serious” voter fraud after learning of votes cast in multiple elections under the named of recently-deceased residents.

A local media outlet uncovered the fraud by comparing voting history databases in the state with federal government death records. “Somebody was able to cast a vote that was not theirs to cast,” El Paso County Clerk and Recorder Chuck Broerman told CBS4 while discussing what he called a “very serious” pattern of people mailing in ballots on behalf of the dead.

It’s not clear how many fraudulent ballots have been submitted in recent years. CBS4 reported that it “found multiple cases” of dead people voting around the state, revelations that have provoked state criminal investigations.

It also turns out that dead people have been voting in California. In fact, one dead man in the state has been casting votes since 2004, and authorities have found “hundreds” of similar examples…

“He took a lot of time choosing his candidates,” said Annette Givans of her father, John Cenkner.

But he’s not the only one.

CBS2 compared millions of voting records from the California Secretary of State’s office with death records from the Social Security Administration and found hundreds of so-called dead voters.

Do these instances of voting fraud make you angry?

If so, that is good, because they should. Countless numbers of Americans have laid down their lives to give us the right to vote, and the people behind this vote fraud are making a mockery of their sacrifices.

In the swing state of Pennsylvania, an investigation has found dozens of instances where illegal immigrants have been allowed to vote in recent elections…

At least 86 non-citizens have been registered voters in Philadelphia since 2013, and almost half — 40 — even voted in at least one recent election, according to a legal group that sued to get voter registration records.

Joseph Vanderhulst, an attorney with the Public Interest Legal Foundation, noted Philadelphia knows about those 86 illegal voters only because officials received specific requests — in almost every case from the voters themselves — to remove the names from the rolls. He said there is no way to know how many non-citizens might be registered to vote in Philadelphia, let alone in the rest of politically crucial Pennsylvania.

But of course Pennsylvania is far from alone. It also turns out that lots of illegal immigrants have been voting in Virginia…

Philadelphia becomes the latest jurisdiction that the Public Interest Legal Foundation has revealed to have irregularities in the voter rolls. The group recently found 1,046 non-citizens who had been registered to vote in eight Virginia counties and that nearly 200 cast ballots between 2005 and 2015.

It should be obvious to anyone with an ounce of common sense that we need to tighten up our voting laws and that we need much stricter enforcement. Unfortunately, Democrats typically fight tooth and nail against such measures.

In Indiana, state police just raided a voter registration agency that appears to have been involved in a voting fraud scheme that spanned nine counties. What they have uncovered so far is extremely alarming…

Police said the growing number of involved counties leads investigators to believe that the number of fraudulent records might be in the hundreds.

The possible fraudulent information is a combination of fake names, addresses and dates of birth with real information.

No matter what your political perspective is, the facts that I just laid out should deeply disturb you.

There are documented incidents of voting fraud all over the nation, and it is inexcusable that dead people and illegal immigrants are being allowed to cast votes in our elections.

And later this week I am going to share with you some absolutely amazing evidence that a systematic attempt was made to alter the outcome of the last presidential election.

If we don’t stop these crooks from messing with our elections, it is just going to keep happening over and over again. So if you see something strange when you go to vote in 2016, please let me know, because I plan to make this a major issue if there is evidence of fraud this time around.