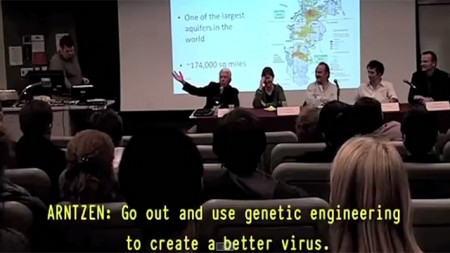 Truth Stream Media (with Aaron Dykes and Melissa Melton) carried a bombshell story a few weeks ago that suddenly makes even more sense with recent Ebola revelations. The story is entitled Edible Vaccine Inventor Jokes about Culling Population with GMO Virus and it carries a video, shown below, of Dr. Charles Arntzen, head of The Biodesign Institute for Infectious Diseases and Vaccinology, answering a question about how to kill off billions of humans in a depopulation scheme.

From the audience, Dr. Jason Robert asks him:

In response, Dr. Arntzen, developer of an Ebola vaccine tested on mice, says:

Has anybody seen “Contagion?” (laughter) That’s the answer! Go out and use genetic engineering to create a better virus. (laughter) Twenty-five percent of the population is supposed to go in “Contagion.”