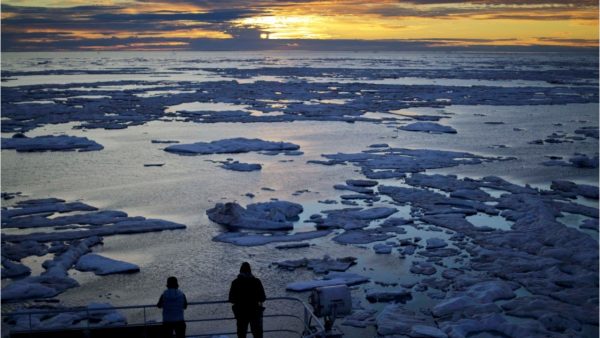 (UBM) The following account is taken from Elane’s book, “I Stand All Amazed: Love and Healing from Higher Realms“. Elane was clinically dead for an hour and was being prepped for the morgue when she came back from the dead. Meanwhile she was given a tour of heaven as well as a vision of what could happen on this planet given our current course.

As the angel pointed in front of me a wide view of land and water opened up, so that at first I thought I was seeing two countries. Instantly it was made known to me that I was looking at a vastly changed portion of North America, which was completely divided by a large body of water, and which had lost a large part of both eastern and western shorelines. As I saw this I was given a total understanding of the natural and man-made disasters that would need to occur to make these changes, and I was informed that these might or might not come to pass according to our choices as a people — according to my choices as an individual.

In this scenario icebergs and polar icecaps were melting. Earthquakes had occurred and there had been hurricanes and fierce storms — the whole country had been ravaged by these things. I could also see massive fires burning here and there — not so much the flames as the smoke that was ascending toward me — as huge areas of the country seemed to be burning or burned. There were also explosions in some areas, sort of like sheet lightning in a dark sky, that were doing great damage.

Where Washington and Oregon had been there were mostly islands, the water coming inland over most of California and Arizona and parts of Utah and Nevada. Yet there were also islands there, massive ones, so it wasn’t like it was all ocean….

On the East Coast I saw that much of the eastern seaboard was gone, though the water did not come so far inland as it did on the West Coast. I was also aware that the southern half of Florida was under water.

I don’t remember seeing anything like Central America or South America, for water surrounded what I was seeing, and I didn’t really focus on what was beyond that water. Yet at the same time, I had the understanding that the waters had risen around the entire earth, and that everything had changed to one degree or another.

The area of water in the middle of … the United States was massive, and was widest or most extensive in the north. There were no Great Lakes as I had known them, for all of them had come together into this huge sea that extended northeastward into the ocean. The inland sea also extended southward, filling most of the Mississippi an Missouri River valleys and widening by many, many miles the Mississippi River where it flows into what we know as the Gulf of Mexico. This sea was so vast that I knew it could not be bridged, and so in essence the United States had become as two separate countries.

A New Seat of Power

I was also aware that the seat of power, or patriotism, had moved away from Washington, D.C. There was so much turmoil and warfare on the eastern side of this body of water that no authority really existed there. I understood then that in the scenario I was being shown our country had come to the very edge of destruction — to the brink of losing everything, because myself and hosts of others like me had chosen to seek worldly things rather than loving or serving others.

Additionally, we had refused to care for our precious natural resources. Because of our greed and selfishness our national government had lost most of its power, and could no longer completely govern or control. National laws were ignored, and there was no true nationwide governmental infrastructure left. What government there was seemed to be territorial, sort of like large tribes or groups of people who had banded together.

And I saw that because of the ramifications of these day-to-day choices the people, especially on the eastern side of this new body of water, lived in great danger and fear. There was tremendous anarchy and crime — sort of like the Los Angeles riots spread nationwide. And the normal citizens kept themselves hidden away from all this, barricading themselves into their homes or wherever they had gathered together for security. Many children didn’t go to school; commerce as we know it had pretty much ceased; many people were starving to death; there was terrible violence from people who seemed like roving gangs — it was just an awful scene of confusion and turmoil.

Yet in this scenario there was less of that turmoil on the western portion of our country. There was even a certain amount of prosperity, and it was there that I could see the new seat of power, if that is what it could be called. This area, or city or whatever, while on the eastern edge or shore line of the western portion of land, was located in almost the exact center of the combination of both halves of the country. Later when I looked at a map of the United States, I realized that it would have been very near present-day Kansas City.

From this location I could see power radiating outward, almost like light flowing out to strengthen and stabilize other areas. This power was what I called patriotism or strong moral character or spirituality — a true spiritual force that was the only real governing power over the whole land. This is why I called that area the seat of power.

But I must state this power was totally spiritual — a true power of spirit such as the angel beside me was exhibiting, or that I had felt emanating from Christ while I had been in His presence.

I also sensed that some of the Indians — the Native Americans — were partially responsible for the peacefulness that was on the western side of this water. Some of these Native American peoples had a knowledge of how to live from the land, or how to be in harmony with it so it would bring forth in abundance according to their needs. They were teaching this spiritual knowledge to the people around them, and all the people were starting to learn to live in harmony with each other. At the same time they were beginning again to prosper by becoming harmonious with nature, or the natural elements upon which they depended.