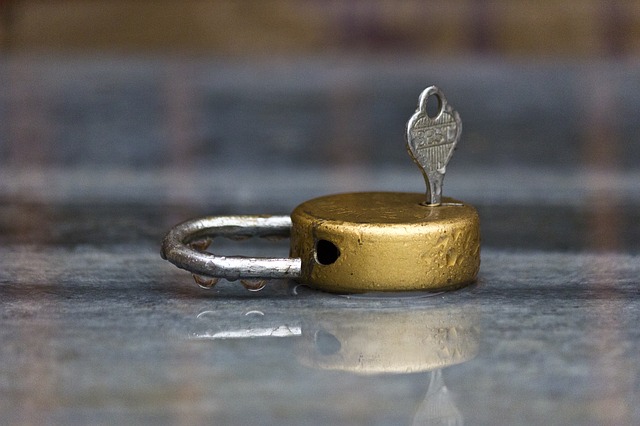 Could you imagine being a single parent and trying to survive in America today on $10.50 an hour? For a moment, I want you to imagine that you are living in a moldy apartment that is so badly maintained that rain seeps in whenever it rains. You are employed, but you are completely dependent on government programs such as food stamps and Medicaid in order to make ends meet. Sometimes you would really like to take your small child somewhere fun, like a movie theater, but you can’t really afford the gas money. You are working as hard as you can, but you never seem to get anywhere, and you feel trapped because nobody seems to want to hire you for a better job. What I have just described for you is real life for a 22-year-old single mother from Chicago named Adriana Alvarez, but there are tens of millions of other Americans that have similar stories. If every day seems like it is a soul-crushing struggle for you, I want you to know that you are not alone. The long-term economic collapse that I chronicle on my website is not just about facts and figures. It is about real people that are quietly leading lives of silent desperation, and by now it has becoming exceedingly apparent that our politicians, the mainstream media and the gigantic corporations that dominate our economy do not really care much about the rest of us at all.

Life fundamentally changes once you become a parent. Instead of living just for yourself, all of a sudden you have a precious little child that is completely and totally dependent on you. And it is absolutely heartbreaking for any parent to look into the eyes of a little child and try to explain why there is not enough food or why they can’t afford a better place to live.

With that in mind, I want you to read an excerpt from Adriana’s recent blog post entitled “What It’s Really Like To Support Yourself On McDonald’s Pay“…

I’m a single mom with a three-year-old son named Manny. To support him, I work full-time as a cashier at a McDonald’s in Chicago.

I’ve worked at McDonald’s for five years, but still make only $10.50 an hour. The only way my son and I can make it is with food stamps, Medicaid, and a child care subsidy. Most of my coworkers are in the same boat, no matter how long they’ve held their jobs.

With child care, transportation to work, food, rent, and our other basic expenses, there’s no money left over for living. Every time I think about taking Manny somewhere fun, like to a movie, I have to think about whether we can really afford the gas.

When you only make $10.50 an hour and you have a child to take care of, you are obviously very limited as far as where you can live, and where Adriana lives sounds extremely depressing…

We live in a basement apartment, because it’s all I can afford. When it rains, water seeps into the apartment. This wetness brings mold, and I can’t get rid of the smell. We can’t even leave anything on the floor, which is tough with a three-year-old. Toys or anything else on the floor may get ruined when the water comes in.

So what is the solution for Adriana?

Well, she is taking part in nationwide strikes to try to force McDonald’s to pay workers like her a livable wage.

Unfortunately, that simply is not going to happen. McDonald’s restaurants are already experiencing a sales downturn, and if they raise wages substantially they will get crushed by the competition.

And of course those jobs were never meant for people that are trying to raise families. When I was growing up, it was teenagers and senior citizens that worked at McDonald’s. I know, because I was one of those teenagers.

But now millions upon millions of Americans in their prime working years are doing these kinds of jobs. As good jobs have disappeared from our economy, the competition for the jobs that remain has become extremely intense. It is really easy to tell Adriana that she should “get a better job”, but that can be extremely difficult in this economy, especially if you don’t have much education.

I know a lot of sharp, talented, responsible people that have been unemployed for a very long time or that are working at places like McDonald’s because nobody else will hire them. I am amazed that there is not a place for their talents and abilities in the “greatest economy on Earth”. But you know what? Things are about to get a whole lot worse out there.

A few months ago, I wrote that the crashing price of oil was going to cause massive job losses in the energy industry, and now it is happening.

According to Yahoo, more than 100,000 layoffs have already been announced, and this could be just the tip of the iceberg…

Since crude prices began tumbling last year, energy companies have announced plans to lay off more than 100,000 workers around the world. At least 91,000 layoffs have already materialized, with the majority coming in oil-field-services and drilling companies, according to research by Graves & Co., a Houston consulting firm.

And remember, these are not $10.50 an hour jobs. Many of these jobs pay well into the six figures annually. These are exactly the kinds of jobs that the U.S. economy simply cannot afford to lose.

Meanwhile, Barack Obama is colluding with Congress to push through the next great job killing trade agreement. The following was in the Wall Street Journal on Thursday…

Lawmakers introduced fast-track trade legislation into the House and Senate Thursday that could pave the way for President Barack Obama to conclude a major agreement with 11 nations around the Pacific.

This agreement is called “The Trans-Pacific Partnership”, and it would result in millions more good jobs being sent overseas. For much more about this shocking betrayal of the American people, please see my previous article entitled “Obama’s Secret Treaty Would Be The Most Important Step Toward A One World Economic System“.

What our economy desperately needs is more jobs, not less jobs.

And traditionally, small businesses have been the primary engine of job growth in this country.

Unfortunately, our politicians have been absolutely killing small businesses for decades. Just look at the chart below. It comes from the U.S. Census Bureau, and it is extremely alarming. Back in 1980, nearly half of all firms in America were considered to be “young”, and those young firms accounted for almost half of all job creation. Since that time, there has been a slow, steady, depressing decline… 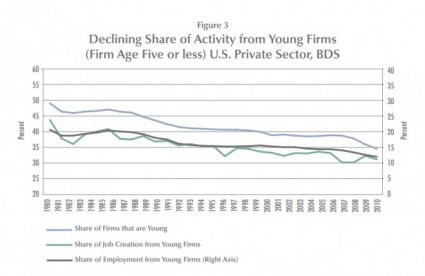 And as I discussed the other day, more businesses have closed in the United States than have opened for each of the past six years.

Prior to 2008, that had never happened before in all of American history.

When I talk about our “long-term economic collapse”, I am not exaggerating.

Our economy is literally dying right in front of our eyes, and it is people like Adriana Alvarez that are paying the price.

We desperately need to go back and start doing the things that once made this country so great, but unfortunately we continue running in the other direction as fast as we can.

So in the end, things are going to get much, much worse.

Things did not have to turn out this way, but these are the choices that we have made, and now we get to live with them.