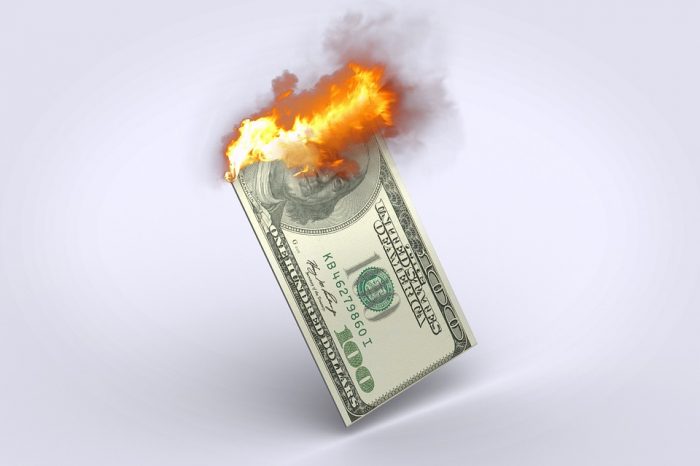 Analysts at Goldman Sachs are saying that it is next to impossible for stock prices to keep going up like they have been recently. Ever since Donald Trump’s surprise election victory in November, stocks have been on a tremendous run, but this surge has not been matched by a turnaround in the real economy. We have essentially had a “no growth” economy for most of the past decade, and ominous signs pointing to big trouble ahead are all around us. The only reason why stocks have been able to perform so well is due to unprecedented intervention by global central banks, but they are not going to be able to keep inflating this bubble forever. At some point this absolutely enormous bubble will burst and investors will lose trillions of dollars.

The only other times we have seen stock valuations at these levels were just before the stock market crash of 1929 and just before the dotcom bubble burst in 2000. For those that think that they can jump into the markets now and make a lot of money from rapidly rising stock prices, I think that it would be wise to consider what analysts at Goldman Sachs are telling us. The following is from a CNBC article that was published on Monday…

Investors may be in for disappointing market returns in the decade to come with valuations at levels this high, if history is any indication.

Analysts at Goldman Sachs pointed out that annualized returns on the S&P 500 10 years out were in the single digits or negative 99 percent of the time when starting with valuations at current levels.

Do you really want to try to fight those odds?

Unfortunately, it appears that is precisely what a lot of investors are planning to do. In fact, Schwab says that they are opening new accounts “at levels we have not seen since the Internet boom of the late 1990s”…

New accounts are at levels we have not seen since the Internet boom of the late 1990s, up 34% over the first half of last year. But maybe more important for the long-term growth of the organization is not so much new accounts, but new-to-firm households, and our new-to-firm retail households were up 50% over that same period from 2016.

Furthermore, according to a June survey from Legg Mason, nearly 80% of millennial investors plan to take on more risk this year, with 66% of them expressing an interest in equities. About 45% plan to take on “much more risk” in their portfolios.

One of the fundamental tenets of investing is to buy low and sell high. Those that are getting in at the peak of the market are going to get absolutely slaughtered. Trillions of dollars of paper wealth will be completely wiped out by the coming crash, and I wish that I could get more people to understand what is about to happen.

I recently wrote about how some really big investors are betting millions upon millions of dollars that a major stock market crash is going to happen in the very near future. The financial markets are far more primed for a crash than they were in 2008, and there are certainly a lot of potential “black swan events” that could push us over the edge. In his most recent article, Simon Black listed some of the things that he is currently watching…

– North Korea is threatening to nuke the US
– Donald Trump is firing his entire cabinet
– The Federal Reserve has dropped interest rates to record lows and drowned the world in trillions of dollars of cash
– Debt levels are at record highs
– Entire banking systems, especially in Europe, are in need of massive bailouts
– The US government will run out of money in less than 90-days and hit the debt ceiling once again

You only make money in the stock market if you get out in time. And since just before the crisis of 2008 I have never seen so many prominent names in the financial community warn about a coming stock market crash as I have over the last 90 days. For example, legendary investor Jim Rogers is warning that there will almost certainly be a crash “this year or the next”, and that it will be “the worst in your lifetime and my lifetime”…

The best-selling author expects the next financial crisis to be the “worst” he has ever seen.

“We’ve had economic problems in the U.S. or in North America every four to eight years since the beginning of the Republic so to say that we’re going to have a problem is not unusual,” he told Kitco News from the Freedom Fest conference in Las Vegas.

“I would expect it to start this year or the next…and it’s going to be the worst in your lifetime and my lifetime.”

What goes up must come down, and markets tend to go down a whole lot faster than they go up.

And in the environment that we are in today, caution is a very good thing. I really like how billionaire Howard Marks put this the other day…

I think it’s better to turn cautious too soon (and thus perhaps underperform for a while) rather than too late, after the downslide has begun, making it hard to trim risk, achieve exits and cut losses.

Perhaps this will be the first giant financial bubble in our history to end smoothly, but I wouldn’t count on it.

In the end, I expect this one to end just like all of the others. And I anticipate that the coming crisis will ultimately be worse than anything we have ever faced before because this current bubble has been artificially inflated for so long.

Hopefully stock prices will go up again tomorrow, but it would be exceedingly foolish to ignore all of the warnings. Goldman Sachs says that there is a 99 percent chance that stocks cannot continue surging like this, and in this case I believe that Goldman Sachs is entirely correct.