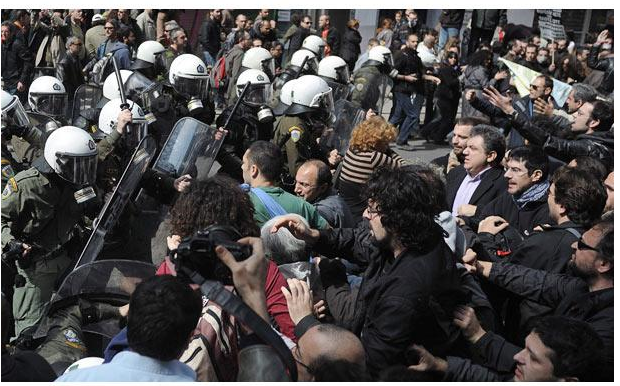 The head of France’s central bank has warned of the dire consequences facing Greece if it fails to strike a bailout deal this week, adding that he fears the country will descend into ‘riots and chaos’.

Warning that the Greek economy ‘is on the edge of catastrophe’, Christian Noyer said he was concerned that major civil unrest could break out if a deal isn’t struck by the weekend.

Speaking at the European Parliament today Greek Prime Minister Alexis Tsipras said he was confident of meeting an end-of-the-week deadline set by eurozone leaders to reach a bailout deal or risk leaving the euro.

Calling on all sides to work together, Tsipras said: ‘This is a European problem which requires a European solution… let us not allow it to become a divided Europe,’ he said. He added that Greece, which has imposed tough reforms in exchange for two EU-IMF bailouts since 2010, had been used as an ‘austerity laboratory’ by the rest of Europe.