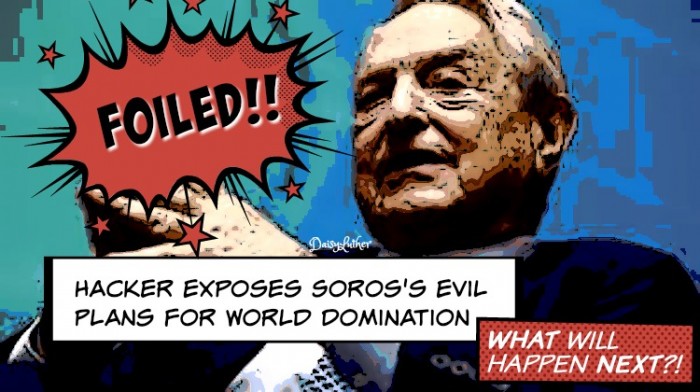 Is there an IQ test to be one of the so-called “global elite“?  Do you need to show a certain level of intelligence or an ability to learn? Because yet another email hack, this time from the account of the ever-creepy-movie-villain-poster-boy George Soros, has aired some dirty laundry that he’d probably rather keep in the hamper.

When you’re rubbing your grimy little hands together and plotting to take over the world, you probably shouldn’t do it by email. Because someone, somewhere is going to hack you. Rest assured, George, the mainstream media will have your back with a little bit of clever propaganda, blaming the hacker and not the supervillain.

After the DNC leaks and the Hillary Clinton leaks, wouldn’t you think that those with a lot of shady secrets to keep would increase their security? Even my teenage daughter knows that the internet is forever and that she should always assume anything sent via the net should be considered to be public, even if it is supposed to be a conversation between friends.

Why on earth would someone as sketchy as George Soros, the “the architect and sponsor of almost every revolution and coup around the world for the last 25 years” according to DC Leaks, not be a little bit more careful with the information he and his organization share online? You’d think that a pro-globalist  billionaire who has been trying to take over the world via shadow government for decades would be just a little bit more savvy than this.

Zero Hedge reported on the findings in the Soros leak:

The documents are from multiple departments of Soros’ organizations. Soros’ the Open Society Foundations seems to be the group with the most documents in the leak. Files come from sections representing almost all geographical regions in the world, from the USA, to Europe, Eurasia, Asia, Latin, America, Africa, the World Bank “the President’s Office”, as well as an unknown entity named SOUK. As the Daily Caller notes, there are documents dating from at least 2008 to 2016.

Documents in the leak range from research papers such as “EUROPEAN CRISIS: Key Developments of the Past 48 Hours” focusing on the impact of the refugee crisis, to a document titled “The Ukraine debate in Germany“, to an update specific financials of grants.

They reveal work plans, strategies, priorities and other activities by Soros, and include reports on European elections, migration and asylum in Europe.

An email leaked by WikiLeaks earlier this week showed Soros had advised Hillary Clinton during her tenure as Secretary of State on how to handle unrest in Albania – advice she acted on.

The thing that I found the most interesting about this leak – aside from the jaw-dropping bafflement about why all of this stuff is not-very-privately on the internet in the first place – is that some of the Soros documents seem to support the theory that he is behind the mass Islamic immigration into Europe to cause destabilization.

If this is the case and he is in cahoots with Hillary Clinton, who we all know is pro-immigration – then we can look to Europe of a preview of what is to come. And in case you thought maybe the emails were a fluke and they aren’t in cahoots, Tim Kaine, HRC’s vice-presidential pick, had lunch with Soros’ son on Friday. (Alex Soros boasted about it on Instagram.)

The plan, as it always seems to be is to cause chaos, then swoop in and “fix” it with ever-more-intrusive laws and crackdowns on personal freedom. They cause fear and in return, some people give away their liberty without even realizing that it’s a big freakin’ deal, because they want to feel a little safer.

All of these Black Lives Matter protests?  Soros was busted for paying protesters to go into Ferguson and stir things up. This is not theory. It’s FACT. The Daily Mail reported that Soros spent $33 million to bankroll the protests. The Washington Times reported that it was totally cool, though, because humanitarian that he is, Soros just wanted to help the civil rights movement. What a guy. Of course, this seems to be a thing with the kabillionaires. The Ford Foundation and Rockefeller foundation also fund “social activism.”  Which is kabillionaire code for “mess stuff up and wreak havoc.”

And guess who footed the bill for the rent-a-thug protesters at Trump rallies in California and New York? (Here’s another source, too.) You guessed it. Everyone’s favorite Hungarian-American troll. Incidentally, rumor has it that during WW2, Soros, just a teen, collaborated with the Nazis and sent many Jews to the death camps, making out like a bandit with their personal property at the same time.

The “elites” profit while the rest of us find it more and more of a struggle to survive. Are you prepped yet? Because it looks like we may be in for a bumpy ride. Store emergency food, ammo and firearms, and non-food supplies.  Chaos will be coming to America, and George Soros will the engineer tooting his horn and driving the disaster train.

But we should shoot the messenger.

Oh – and this whole business with the leaks gets even better. (Or worse, depending on one’s perspective.) Remember how I wrote about propaganda this weekend and how the media isn’t even trying to hide their bias? Well, Time Magazine has said solemnly that

Well, Time Magazine has said solemnly that WikiLeaks founder  Julian Assange was even “scarier” than the NSA. In one of the most ridiculous contortions of justification that you’ll ever read, the essay blames Assange for the deaths of DNC staffers, as opposed to the people who actually killed the staffers. Because if Assange hadn’t helped them blow the whistle on the DNC corruption, it would all be fine. If Assange was a decent human being, he’d protect the privacy of the corrupt people he is exposing to the light. Wikileaks is publishing their correspondence, yes, but who is truly responsible for taking slimy, secretive, and possibly murderous actions?

Soros, the Clintons, and the DNC are right on the verge of reaping what they’ve sown. If enough people demand on truth and transparency and refuse to accept the propaganda and the corruption, we can change our future. We have tools that no other generation of revolutionaries have had: the internet and social media. We can use these tools to shed light into the dark crevices that the “elite” are hiding all of their dirty little secrets in.

How can we lose? Because, you know, they can’t seem to figure out email security.