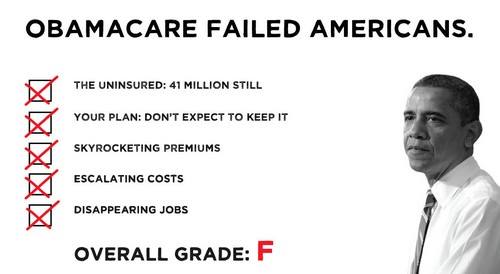 Top Republicans are now publicly saying that Obamacare will never be fully repealed. In fact, many Republicans in Congress are already using the term “repair” instead of “repeal” to describe what is going to happen to Barack Obama’s signature healthcare law. Without a doubt, the Republicans in Congress are eventually going to do something, but strategists in both parties are now suggesting that most of the key elements of Obamacare are going to remain once everything is all said and done. It will be put into a more “conservative” package, but it will still be Obamacare.

On Thursday, former House Speaker John Boehner made headlines all over the country when he said that a complete repeal of Obamacare is “not what’s going to happen”. Instead, Boehner said that Republicans are going to “fix Obamacare” and that they will “put a more conservative box around it” in order to keep their constituents happy.

Of course this isn’t what we voted for. For years, Republican politicians all across the country have been promising that Obamacare would be repealed once they got control of Congress, but now Boehner is telling us that all of that was just “happy talk”…

Earlier in the panel discussion, Boehner said he “started laughing” when Republicans started talking about moving lightning fast on repeal and then coming up with an alternative.

“In the 25 years that I served in the United States Congress, Republicans never, ever, one time agreed on what a health care proposal should look like. Not once,” Boehner said. “And all this happy talk that went on in November and December and January about repeal, repeal, repeal—yeah, we’ll do replace, replace—I started laughing, because if you pass repeal without replace, first, anything that happens is your fault. You broke it.”

When the Republicans finally get around to doing something, they will inevitably declare it to be a great victory, but will it actually be that much different from what we have now?

That isn’t fair, and it never will be. One half of the country shouldn’t have to pay much higher rates for their own health insurance and also pay for the healthcare of everyone else in the nation as well. Either we should go back to a free market system, or they might as well go ahead and socialize the entire thing.

The thought of sticking with what we have right now is utter insanity, but unfortunately that is what top Republicans mean when they speak of “repairing” Obamacare. The following comes from the New York Times…

“When you talk about ‘repeal,’ you have just used a word that is very polarizing,” said Representative Tom MacArthur, Republican of New Jersey, who meets weekly with moderate Republicans and Democrats of equal number. “When you go to Democrats and say, ‘Help us repeal,’ that puts them in a box. If you say, ‘Would you help us repair something?’ people start listening in a whole other way.”

How in the world do you “repair” a steaming pile of garbage?

What the Republicans need to do is very simple. As Jim Demint has suggested, the Republicans in Congress simply need to pass the same Obamacare repeal that Barack Obama vetoed not too long ago…

Heritage Foundation President Jim DeMint, the former South Carolina Republican senator, called on activists attending the Conservative Political Action Conference to push their members of Congress to send to President Donald Trump the same legislation that dismantled the law and was vetoed by President Barack Obama with all due haste.

“We must and we can repeal Obamacare now,” DeMint said. “They should send that same bill to President Trump right now.”

So what is keeping Republicans in Congress from moving forward?

Sen. Lisa Murkowski (R-Alaska) says she will not vote for an ObamaCare repeal bill that defunds Planned Parenthood.

In her address to Alaska’s state legislature Wednesday, the moderate Republican offered her firmest commitment yet that she will not support defunding Planned Parenthood.

“I, for one, do not believe that Planned Parenthood has any place in our deliberations on the Affordable Care Act,” she said.

U.S. Sen. Charles Grassley of Iowa and Reps. Jason Chaffetz of Utah, Marsha Blackburn of Tennessee and Tom McClintock of California are among Republicans who faced hostile audiences at recent town hall meetings.

This comes after the Women’s March on Washington that drew hundreds of thousands of protestors the day after President Donald Trump’s inauguration.

“Republicans need to be paying attention and doing their best to understand the energy from the town halls,” said Nathan Gonzales, editor and publisher of Inside Elections, a Washington-based publication that tracks congressional races.

Of course a lot of those “angry protesters” are from Barack Obama’s private army of more than 30,000 volunteers that are being deployed around the nation in a desperate attempt to defend Obamacare.

In the end, the truth is that the Republicans should be listening to the voters that sent them to Washington in the first place. Most of those voters expected an immediate Obamacare repeal, and now that it has not happened it is making for a very confusing tax season. The following comes from Politico…

Republicans’ stalled campaign to repeal the Affordable Care Act is sowing confusion among those now trying to do their taxes.

Many taxpayers believe Republicans have already repealed the law, tax preparers say, and they’re surprised and upset to learn they are still subject to Obamacare’s penalty for failing to have health insurance — a charge that climbed this year to more than $2,000 per family.

It was one of the worst pieces of legislation ever written, and it boggles the mind that so many Republicans in Congress are hesitant about repealing it.

Unfortunately, just as I portray in my novel, America is rapidly going crazy.

We have been given over to a reprobate mind, and our leaders can’t even seem to think straight any longer.

If Obamacare is going to be repealed, now is the time. Please contact your representatives in Congress and tell them that a “fix” will not work and that we want Obamacare to be completely repealed and replaced with a free market alternative.