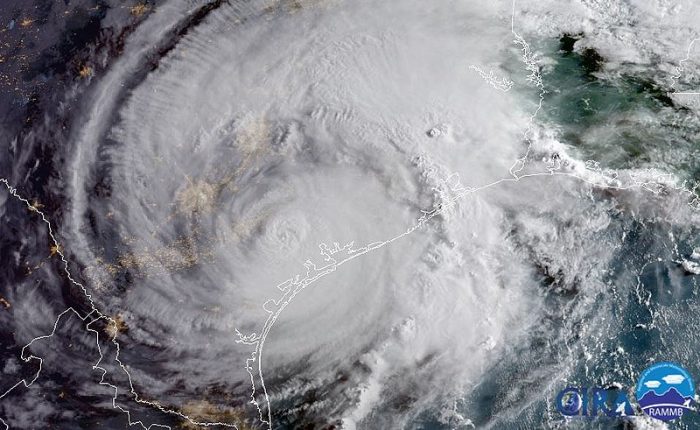 Do you remember what Hurricane Katrina did to New Orleans? Well, now we are watching the same thing happen to southeast Texas. On Friday, Hurricane Harvey made landfall as a category 4 hurricane. It is the first hurricane to make landfall in the United States in 12 years, and it is the most powerful storm to hit the state of Texas in at least 50 years. One meteorologist is saying that what we are witnessing is “worse than the worst-case scenario for Houston”, and another stated that this storm “could easily be one of the worst flooding disasters in U.S. history”.

It would be difficult to overstate the devastation in the Houston area at this moment. Hurricane Harvey has ripped roofs off of homes, turned vehicles over and snapped thousands of trees. Thousands have been rescued from their homes and vehicles, and it is being reported that so far five people have died. In fact, one woman’s dead body was actually spotted floating down the street.

According to the National Weather Service, over 24 inches of rain fell in Houston in just a 24 hour period. More rain continues to fall in southeast Texas, and meteorologists are running out of adjectives to describe the nightmare that is currently unfolding…

The latest forecasts are telling us that we could see a total of 40 to 50 inches of rain in southeast Texas by Thursday, and so some areas will actually receive a “year’s worth of rain” in less than a week…

“A year’s worth of rain may fall in the span of a few days near the Texas Gulf Coast,” reported Weather.com. “A multi-day deluge of the Texas Gulf Coast with catastrophic and life-threatening flooding and destructive winds through could leave areas uninhabitable for an extended period of time, the National Weather Service has warned.”

Did you catch that last part?

The National Weather Service is actually saying that some portions of Texas could be “uninhabitable for an extended period of time” as a result of this storm.

It appears to be inevitable that more people are doing to die before this is all over. Authorities are trying to rescue as many people as they can, but there just aren’t enough resources.

As the water continues to climb, some people are actually climbing into their attics in a desperate attempt to save themselves, but that is a very bad idea…

“We are getting calls from people climbing into their attic. This is along I-45 between downtown and Clear Lake,” Lindner said. “This is along Berry Bayou, Beamer Ditch, Turkey Creek, portions of Clear Creek, Vince Bayou, Little Vince Bayou in Pasadena,” he said. “Pretty much the entire southeast side of Harris County has had 13 to 15 inches of rain in three hours.”

Chief Art Acevedo tweeted,” have reports of people getting into attic to escape floodwater do not do so unless you have an ax or means to break through onto your roof.”

This is already being called “a once in a 500 year flood”, and the experts are already telling us that the total economic damage is going to be in the tens of billions of dollars.

Earlier this month, I wrote about an unusual series of events that would happen over a 40 day period starting with the recent solar eclipse, but of course at the time I couldn’t account for additional unexpected events such as Hurricane Harvey. And I find it very interesting that this hurricane began forming just about the same time as the eclipse. The following comes from Wikipedia…

The eighth named storm, third hurricane, and the first major hurricane of the 2017 Atlantic hurricane season, Harvey developed from a tropical wave to the east of the Lesser Antilles on August 17. The storm crossed through the Windward Islands on the following day, passing just south of Barbados and later near Saint Vincent. Upon entering the Caribbean Sea, Harvey began to weaken due to moderate wind shear and degenerated into a tropical wave north of Colombia early on August 19. The remnants were monitored for regeneration as it continued west-northwestward across the Caribbean and the Yucatán Peninsula, before re-developing over the Bay of Campeche on August 23. Harvey then began to rapidly intensify on August 24, re-gaining tropical storm status and becoming a hurricane later that day. Moving generally northwestwards, Harvey’s intensification phase stalled slightly overnight from August 24–25, however Harvey soon resumed strengthening and became a Category 4 hurricane late on August 25. Hours later, Harvey made landfall near Rockport, Texas, at peak intensity.

As a result of this storm, thousands could be trapped in their homes without power for an extended period of time.

Do you think that those that have been storing up food and emergency supplies all this time will be glad that they have done so?

Of course the answer to that question is obvious. If you wait until disaster strikes to get prepared, it will be too late. A whole lot of people down in Texas are going to end up in some very desperate situations because they never believed that something like this could ever happen to them.

For those of you that would like some helpful advice on getting prepared for future disasters, I would encourage you to check out a book that I co-authored with Barbara Fix entitled “Get Prepared Now”. Barbara is a highly respected prepping expert, and she is also getting heavily involved in my campaign for Congress. So much of the information in that book is timeless, and my hope is that we can encourage as many people as possible to start getting prepared because very troubled times are ahead of us.

Please pray for the people in Houston and throughout the entire southeast Texas area. We truly have not seen a storm like this since Hurricane Katrina, and many portions of the Texas Gulf Coast will be changed forever by this disaster.