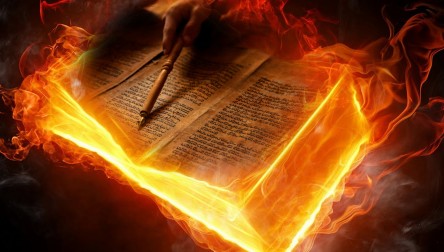 The Scriptures warn us that there will be great persecution in the last days, and many people have been receiving dreams and visions about this.  Unfortunately, most of the Church in the western world is still completely clueless about what is coming.

Today, I would like to share another dream that was sent to me by Dwayne Desmarais.  Hopefully this dream will encourage all of us to get spiritually prepared for the great persecution that is rapidly approaching…

I am in what appears to be a war room. There are maps all over the walls, with many dressed in army fatigues busy about their work. I am with five other men (who I never see throughout the dream, I just know they are by my right and left side…angels?) A man approaches us dressed in camouflage and a beret, with a pointing stick in his hand. We are in front of a huge oval mahogany table filled with maps. He points on one of the maps, showing us where we are to be deployed. Immediately we are in the back of a five ton Army truck riding out in the desert. I am at the back of the truck, being able to look over the terrain. I see a huge compound with barbed wire all around it. Inside I see tents and lean-to’s and many people dressed in Jesus era attire.

The truck enters the gates and we are instructed to climb out of the truck. As soon as I hit the ground, I am approached by a man in a robe and sandals. I could only see him from his long white beard down. He instructs me to follow him. We come to this huge stone fountain. He walks up and steps on a pedal, and molten metal bubbles up with fire. He then says: “My son, reach in and take the bad metal and place it to the left, and the good metal and place it to the right.” I look at him and say: “I would burn my arm off!” He repeats the same words. I walk up to the fountain and look inside. The heat is intense, but I can clearly see the bottom where all the pieces of metal are. I reach in with my left arm. It is hot, but I do not get burned. I could distinguish the good pieces from the bad, and I place each piece according to his instructions.

I do this five times. As I go for a sixth time. I look and I see something huge begin to emerge from the bottom. I said: “That looks like a finger”! I reach in and I touch it…it is a huge finger!!! As I pull out, the finger rapidly vanishes. I stagger back. Suddenly, fire erupts about one hundred feet into the air. A huge hand with a 4 x 2 foot pure white marble slab thrusts out of the fountain. Written on the marble slab were the words in bold black letters HOLY BIBLE I run up to the Bible and bring it to my chest. Someone to my left says: “We do not do that here.” I said: “I will die with this book in my arms.”  Wake up!!

I firmly believe we are living in a time where the Lord is raising up champions who will not deter left nor right, and be able to rightly divide His Word. They will stand in the gap and hold fast to the truth regardless the opposition. The birthing of soft bigotry and offense towards Christians we are experiencing here in America is exactly how other countries that are seeing churches burn and the faithful killed, began. Worldwide, there are approximately 215 million Christians experiencing high, very high or extreme persecution. From North Korea to Afganistan, to Iraq to Somalia. There is a growing need for those who will be bold in standing in the gap for the Lord in coming days. Statistics prove that close to 100,000 Christians die for the faith each year, and that number will soon rise. Though we are still relatively safe here, a time is coming (as Scripture says) “For a time will come when people will not put up with sound doctrine. Instead, to suit their own desires,they will gather around them a great number of teachers to say what their itching ears want to hear.” (2 Tim. 4:3)

If this is what will soon transpire within God’s Church, how much more will the persecution be from those from without? Let us not be fooled! We are spending more time knocking each other down within the community of believers than trying to save the lost! Clinging to the Word of God in coming days will be key to standing when most will fall. (Mt. 24:12) I believe many have been called out to be separate, but few will respond. (Mt. 22;14) The desert and barbed wired compound in the dream, could be a metaphor for the expelling of God’s word from every facet of society, relegating many to a form of captivity who believe wholly in God’s word. Almost having to go underground or to remote places to practice our faith, like in China, Iraq, Iran and other persecuted nations. The “we don’t do that here” crowd…The gift of discernment will be key in coming days, as the Lord exposes the tares among the wheat, the goats among the sheep. (good metal bad metal in dream) One of the titles I gave the dream is “Sheep & Goats” (Mt.25:31-46) An end-time scenario for sure!

There is always a hope for those who abide. God will not forsake His bride. Through all of this, God’s glory will shine brighter than ever! It may look like chaos, but He is only removing what is null and void. If we stand firm, and learn to overcome, we will never be put to shame…..blessings…..