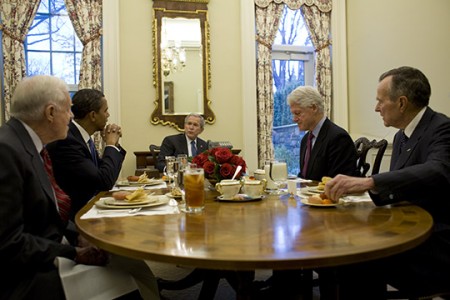 Since leaving the White House, the Clintons have earned at least 100 million dollars and currently have a net worth of up to 50 million dollars.  So why in the world do the taxpayers need to give Bill Clinton $944,000 to fund his extravagant lifestyle in 2014?  If ordinary Americans truly understood how much money many former politicians are being handed every year they would go bananas.  According to a Congressional Research Service report that was published earlier this year, the federal government has given a total of nearly 16 million dollars to Bill Clinton since 2001.  Each one of those dollars is a dollar that some U.S. taxpayer worked really hard for or that we had to borrow.  Yes, we don’t want our former presidents to go broke for a whole bunch of reasons, but it is absolutely absurd that we are showering them with millions upon millions of dollars.

Yesterday, I wrote about the trouble that Hillary has caused for herself by claiming that the Clintons were “dead broke” when they left the White House.

The way things have been set up, there is no way in the world that any former president is going to be “dead broke” ever again unless the law is changed.

According to the Washington Post, Bill Clinton has been receiving about a million dollars a year “for office space, staff, and a pension” since he left office…

According to an April report from the Congressional Research Service, Bill Clinton has received nearly $16 million in pensions and benefits from the federal government since leaving office. That includes $944,000 in fiscal year 2014 for office space, staff, and a pension.

That is insanely wasteful.

George W. Bush is actually receiving more money from the taxpayers than Clinton is each year…

Bush the younger is costing taxpayers $1.28 million this year, and averages 4 per cent more annual than Clinton.

The government’s General Services Administration inexplicably budgeted $102,000 for Bush’s telephone expenses in 2014, and planned to spend $135,000 more on furniture, computers, office supplies and other miscellany.

Does he have the world’s worst calling plan?

According to author Robert Keith Gray, approximately 1.4 billion dollars is spent on the Obamas every year.  Here are just a few nuggets from his book…

-The Obamas have the “biggest staff in history at the highest wages ever“.

-There is always at least one projectionist at the White House 24 hours a day just in case there is someone that wants to watch a movie.

-The “dog handler” for the family dog Bo reportedly makes $102,000 per year and sometimes he is even flown to where the family is vacationing so that he can care for the dog.

But at this point we spend more on our presidents than any nation on the planet does on their entire royal families.

Over the years, the political elite have tilted the rules of the game dramatically in their favor.  Neither political party objects because they both benefit from riding on the endless gravy train.