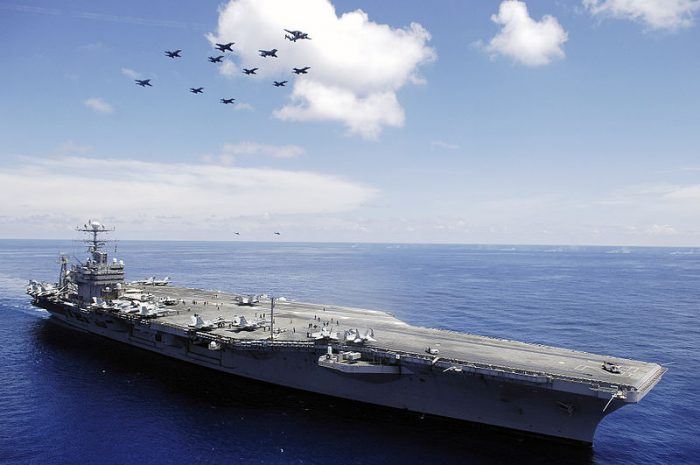 After a bit of a lull for the past couple of months, the march toward war appears to be accelerating once again.  On Monday the U.S. military shot down yet another Syrian aircraft, and it appears that President Trump’s patience with North Korea’s nuclear program may have run out.  Unlike our wars in Iraq and Afghanistan, the situations in Syria and North Korea both have the potential of sparking a much wider conflict.  If we end up in a war with Syria, it is very likely that we will ultimately be fighting the Russians and the Iranians as well.  On the other side of the globe, a war with North Korea could also potentially draw in China.  This happened in the first Korean War, and it could easily happen again.  It is understandable that the Trump administration wants to be tough with both Syria and North Korea, but we need to be extremely careful about the use of military force because one wrong move could potentially spark World War 3.

For the last couple of months, the Trump administration has been relying on China to put pressure on North Korea to end their nuclear weapons program.  But now it appears that Trump has given up on that.  On Monday, he posted the following message on his Twitter account…

While I greatly appreciate the efforts of President Xi & China to help with North Korea, it has not worked out. At least I know China tried!

That certainly sounds quite ominous.

Is he saying that he has completely given up on a diplomatic solution?

And this tweet comes at a time when it is being reported that it looks like North Korea may be preparing for a new underground nuclear test.  If North Korea goes through with another nuclear test, it is unclear at this point how the Trump administration will respond.  The following comes from CNN…

The officials said it is not yet clear if the activity indicates a sixth nuclear test is imminent, but noted there is concern that North Korea could set off a test during Wednesday’s visit to Washington by top Chinese diplomats and military officials.

US officials have known that the site is ready to conduct an underground test for some time.

Two senior US officials with direct knowledge also told CNN that military options for North Korea have recently been updated, and will be presented to President Donald Trump for a decision to act if there is a nuclear test.

Meanwhile, we continue to get closer to war over in Syria as well.  On Monday, yet another Syrian aircraft was shot down by the U.S. military…

A US F-15E fighter jet shot down a pro-Syrian regime drone near At Tanf, Syria, on Monday, two US officials told CNN, the third downing of a pro-regime aircraft this month.

The US-led international coalition later confirmed the incident in a statement, saying the armed drone was downed “after it displayed hostile intent and advanced on Coalition forces” that “were manning an established combat outpost to the northeast of At Tanf where they are training and advising partner ground forces in the fight against ISIS.”

If we continue to shoot down Syrian aircraft, eventually there is going to be a response.  And once a conflict erupts, we could easily find ourselves engaged with the Russian military.

At this point there is absolutely no reason for us to be in Syria.  ISIS forces are on their last legs, and we could easily let Russia and Iran finish them off.

By sticking around in Syria, we are playing a very dangerous game.  According to Connecticut Senator Chris Murphy, if we allow things to continue to escalate we could easily find ourselves involved in a full-blown regional war…

According to Fox News, this is the second time the US has shot down an Iranian drone in less than a month. It also marks the fifth time since late May the U.S. military has bombed pro-Syrian forces in southern Syria.

Connecticut Sen. Chris Murphy described the attack as “a dangerous escalation” of tensions between the US and the main backers of the Syrian regime, Russia and Iran.

Murphy told CNN that if the US doesn’t stop the attacks, the situation could escalate into an armed conflict between the two sides, who both claim to be fighting ISIS.

We haven’t seen things this tense between the United States and Russia since the height of the Cold War.  Anti-Russian hysteria in Washington is completely out of control, and the Russians are certainly not helping things either.  For example, according to Fox News a Russian Su-27 came “within 5 feet” of an American recon plane over the Baltic Sea on Monday…

The Russian Su-27 jet had air-to-air missiles under its wings and approached the U.S. Air Force RC-135 recon jet “rapidly,” coming within 5 feet of the American aircraft, the officials said.

There is a fine line between “projecting strength” and “provoking a war”.

As far as North Korea is concerned, we should use other means to derail their nuclear program.  We cannot allow them to develop an ICBM capable of hitting U.S. cities, but a direct military strike could potentially spark a conflict that would result in millions of deaths.

For most Americans, a third world war is absolutely unthinkable.  And hopefully our leaders will go to great lengths to avoid one.

But at this moment global tensions continue to rise, and one wrong move could start a chain of events that nobody may be able to stop.