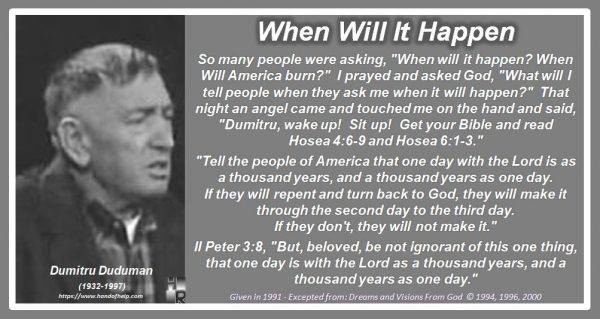 Nearly 35 years ago, God gave Dumitru Duduman a very ominous prophetic warning for America.  When relations between the United States and Russia were greatly improving after the end of the Cold War, a lot of people mocked Dumitru Duduman.  But of course in our time relations with Russia are even worse than they were at the end of the Cold War, and the stage is being set for the fulfillment of all the prophecies about a future war with Russia.  If you are not familiar with Dumitru Duduman, he was a Romanian man of God that spent many years smuggling Bibles into Russia during the peak of the Cold War.  The following is an excerpt from his bio…

In 1973 Dumitru began smuggling large quantities of Bibles over the Russian border. He had established many connections with outside missionaries who would supply him with Bibles. Through many miraculous occurrencies, God continually protected Dumitru. In one instance, God even blinded the eyes of the police so they would not see the car filled with Bibles that he was riding in. In all of his years of smuggling Bibles he was never caught. In 1979 based on information received from informants within the Christian church, Dumitru was arrested and brutally tortured for over five months. Every means imaginable were used, from electric shock to breaking nine of his ribs trying to obtain the names of people that helped Dumitru smuggle Bibles. With God’s help he never broke under the severe persecution, and he never revealed the names of his Christian borthers. While Dumitru was in prison, God spoke to him through an angel, encouraging him not to fear for he still had much work to do. He was told that he would be released and that he would smuggle Bibles into Romania and into Russia for another five years. Just as the angel had said, after the death of the Colonel who was heading up the investigation, Dumitru was released and for another four years he faithfully did the work of God. Over a fifteen-year period, with God’s help, Dumitru smuggled more than 300,000 Bibles and New Testaments into Russia alone, not taking into account the number of Bibles that he distributed throughout Romania.

On July 24, 1984 Dumitru and his entire family were expelled from Romania by the Communist officials. He had been given two options; either leave the country or die. It was difficult decision for Dumitru because Romanian was all that he had ever known. He would be going to unknown places where he neither spoke the language nor knew anyone who could help him. Once again, God spoke to Dumitru encouraging him and telling him that all would be well. He has yet another task to accomplish and God would be with him wherever he went.

In September 1984, an angel visited Duduman late one night, and the following is what he experienced that night in his own words…

Late one night, I could not sleep, The children were sleeping on the luggage.  My wife and daughter were crying, I went outside and walked around.  I didn’t want them to see me cry.  I walked around the building, crying and saying, “God!  Why did you punish me?  Why did you bring me into this country?  I can’t understand anybody.  If I try to ask anybody anything, all I hear is, “I don’t know.”

I stopped in front of the apartment and sat on a large rock.  Suddenly a bright light came toward me.  I jumped to my feet because it looked as if a car was coming directly at me, attempting to run me down!  I thought the Romanian Secret Police had tracked me to America, and now they were trying to kill me.  But it wasn’t a car at all.  As the light approached, it surrounded me.  From the light I heard the same voice that I had heard so many times in prison.

He said “Dumitru, why are you so despaired?” I said, “Why did you punish me?  Why did you bring me to this country?  I have nowhere to lay my head down.  I can’t understand anybody.”  He said, “Dumitru, didn’t I tell you I am here with you, also?  I brought you to this country because this country will burn.”  I said, ‘then why did you bring me here to burn?  Why didn’t you let me die in my own country?  You should have let me die in jail in Romania!  He said, “Dumitru, have patience so I can tell you.  Get on this.”  I got on something next to him.  I don’t know what it was.  I also know that I was not asleep.  It was not a dream.  It was not a vision.  I was awake just as I am now.

Then he took me back home to the rock where we had begun.  “IN ONE DAY IT WILL BURN!   All of this I have shown you” – I said, “How will it burn?”  He said, “Remember what I am telling you, because you will go on television, on the radio and in churches.  You must yell with a loud voice.  Do not be afraid, because I will be with you.”  I said, “How will I be able to go?  Who knows me here in America?  I don’t know anybody here.”  He said, “Don’t worry yourself.  I will go before you.  I will do a lot of healing in the American churches and I will open the doors for you.  But do not say anything else besides what I tell you.  This country will burn!”

Because of all the sin, I have left some of the churches.  You must yell in a loud voice that they must put an end to their sinning.  They must turn toward the Lord.  The Lord never gets tired of forgiving.  They must draw close to the Lord, and live a clean life.  If they have sinned until now, they must put an end to it, and start a new life as the Bible tells them to live.”

I said, “How will America burn?”  America is the most powerful country in this world.  Why did you bring us here to burn?  Why didn’t you at least let us die where ALL the Dudumans have died?”

He said, “Remember this, Dumitru.  The Russian spies have discovered where the nuclear warehouses are in America.  When the Americans will think that it is peace and safety – from the middle of the country, some of the people will start fighting against the government.  The government will be busy with internal problems.  Then from the ocean, from Cuba, Nicaragua, Mexico,,..” (He told me two other countries, but I didn’t remember what they were.) “…they will bomb the nuclear warehouses.  When they explode, America will burn!”

“What will you do with the Church of the Lord? How will you save the ones that will turn toward you?” I asked.  He said, “Tell them this: how I saved the three young ones from the furnace of fire, and how I saved Daniel in the lions den, is the same way I will save them.”

The angel of the Lord also told me, “I have blessed this country because of the Jewish people who are in this country.  I have seven million Jews in this country, but they do not want to recognize the Lord.  They didn’t want to thank God for the blessing they received in this country.  Israel doesn’t want to recognize Jesus Christ.  They put their faith in the Jewish people in America.  But, when America burns, the Lord will raise China, Japan, and other nations to go against the Russians.  They will beat the Russians and push them all the way to the gates of Paris.

Over there they will make a treaty, and appoint the Russians as their leaders.  They will then unite against Israel.  When Israel realizes she does not have the strength of America behind her, she will be frightened.  That’s when she will turn to the Messiah for deliverance.  That’s when the Messiah will come.  Then, the church will meet Jesus in the air, and he will bring them back with Him to the Mount of Olives.  At that time, the battle of Armageddon will be fought.”

When I heard all of this I said, “if you are truly the angel of the Lord, and everything you have told me is true, then all you have said must be written in the Bible.”  He said, “Tell everyone to read from Jeremiah 51:8-15, Revelation chapter 18, and Zechariah chapter 14, where Christ fights against those who possess the earth.  After His victory,” the angel said, “there will be one flock and one Shepherd.  There will be no need for light.  The Lamb of God will be the Light.  There will be no sickness, no tears, and no deaths.  There will only be eternal joy and God will be the ruler.  There will be only one language.  Only one song.  And no need for a translator!   … And, Dumitru,” he continued, “a word of warning.  If you keep anything from the American people that you are told, I will punish you severely.” “How will I know that this is for real -that it will really happen?”  I asked.  “As a sign that I have spoken to you, tomorrow before you wake, I will send someone to bring you a bed, and at noon I will send you a car and a bucket of honey.  After which I will send someone to pay your rent.”  The next day someone brought Dumitru a bed, and at noon a car arrived with the bucket of honey. His rent was also paid, as God had promised him.  (See chapter 10, “THROUGH THE FIRE WITHOUT BURNING.”) Then the angel left.