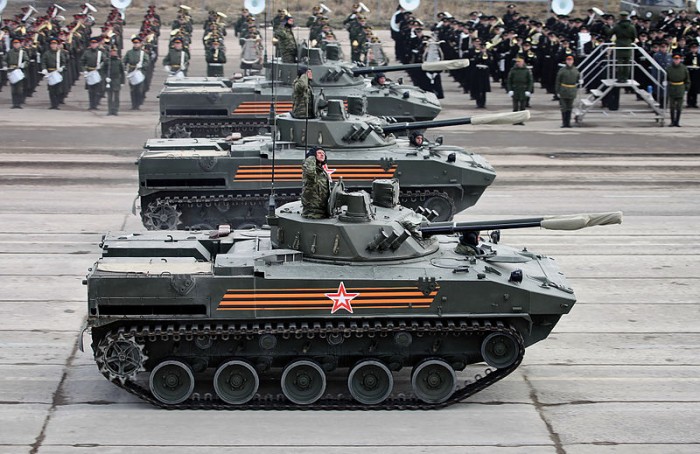 War is coming, but unfortunately most Americans are completely oblivious to what is about to happen.  In recent weeks, tens of thousands of Russian soldiers have been massing at eight staging areas along Russia’s border with Ukraine, and some Pentagon officials believe that this could represent preparations for a full-scale invasion.  But ultimately Russia has much bigger concerns than just Ukraine.  At this point, the Russian people view the United States more negatively than they did even during the height of the Cold War, and their leading thinkers openly talk about the inevitability of a future conflict between the two superpowers.  The Russians have been feverishly upgrading and modernizing their strategic nuclear forces in anticipation of that conflict, but unfortunately the U.S. military has not made similar strides under the Obama administration.  As a result, the balance of power has shifted dramatically in favor of the Russians.

Things have been relatively calm in Ukraine for a while, but that may be about to change in a major way.  According to Business Insider, Russian forces are “encircling Ukraine from the north, east, and south”…

Something big may be about to go down in Ukraine.

For the Ukrainian soldiers that are stationed on the eastern border with Russia, however, things have already escalated to a conventional conflict — for example in Shyrokyne, on the Azov Sea coast east of the port city of Mariupol, Ukrainian forces have reported being the target of over 200 rounds of mortars and artillery fire in the middle of the night from separatist forces.

And the conflict in Ukraine looks like it could be on the verge of boiling over as Russian and Russian-backed forces are encircling Ukraine from the north, east, and south.

Needless to say, these developments are deeply alarming U.S. officials.  In fact, Bill Gertz of the Washington Free Beacon says that up to 40,000 Russian soldiers stand poised to launch a full-scale invasion at this moment…

The Pentagon has identified eight staging areas in Russia where large numbers of military forces appear to be preparing for incursions into Ukraine, according to U.S. defense officials.

As many as 40,000 Russian troops, including tanks, armored vehicles, and air force units, are now arrayed along Ukraine’s eastern border with Russia.

Additionally, large numbers of Russian military forces will conduct exercises in the coming days that Pentagon officials say could be used as cover for an attack on Ukraine.

August 24th is Independence Day in Ukraine, and some analysts are pointing to that date as a time when a potential attack could occur.

Hopefully that will not be the case, and we should remember that Russian President Vladimir Putin tends to do the unexpected.  Just look at what happened in Crimea.  He was able to annex the entire region without a shot hardly being fired.

When it comes to geopolitics, way too often the Russians are playing chess while the Obama administration is playing checkers.

And as I mentioned in the opening paragraph, the Russians are very much preparing for the day when there will be a military showdown between the United States and Russia.

For example, the newly developed Sarmat intercontinental ballistic missile (also known as the “Satan 2”) has the capability of destroying an entire region the size of Texas.  Each missile has 12 independently targetable warheads, and essentially what that means is that one missile goes up and 12 nuclear warheads come down.  It is a weapon of exceedingly great power, and we have no way of stopping it…

Russia is preparing to test-fire a nuclear weapon which is so powerful it could reportedly destroy a whole country in seconds.

The “Satan 2” missile is rumoured to be the most powerful ever designed and is equipped with stealth technology to help it dodge enemy radar systems .

This terrifying doomsday weapon is likely to strike fear into the hearts of Western military chiefs, as current missile defence technology is totally incapable of stopping it.

But to me, what is even more frightening is the fleet of strategic nuclear submarines that the Russians are putting together.  The following comes from a major British news source…

Vladimir Putin is assembling a secret fleet of super submarines which could topple NATO and plunge the world into war.

A report by naval experts warns that Russia already has a small but sophisticated army of subs which are capable of launching missile strikes across the globe.

These submarines can dive extremely deep and they are incredibly quiet.  The advanced stealth capabilities that they possess make them an enormously powerful weapon…

Andrew Metrick, who co-wrote the report for the Center for Strategic and International Studies (CSIS), said: “Russia operates a small number of very small, nuclear powered submarines that are capable of diving in excess of several thousand meters.

“You can imagine what a clandestine deployable deep submergence vehicle could be used for.”

Yes, it doesn’t take much imagination to see what these ultra-quiet subs could be used for.

Someday, a fleet of Russian nuclear submarines could come right up to our coastlines without us ever knowing that they were there.  In the middle of the night they could surface, launch their missiles, and strategic targets would start being destroyed within just a couple of minutes.

And if the U.S. was even able to muster much of a response, the Russian anti-ballistic missile systems are able to destroy just about anything that we can throw at them.

To say that the balance of power has shifted from the days of the Cold War would be a massive understatement.

Meanwhile, the Russians have also been creating a “cloak” which can reportedly make units “invisible” to enemy radar…

A Russian defense company has created a “cloak,” which it says can make electronic objects invisible to enemy radar. The aim of the fiber technology, which is used in the cloak, is to make weapons invisible to prying eyes and detection systems.

The St. Petersburg-based company Roselectronics has come up with the invention and says it can make weapons that use thermal, infrared, and electromagnetic radar in targeting invisible.

“The main idea of the development is to create coverage that reduces radar visibility of the object both on the visible and microwave spectrums,” Georgy Medovnikov from Roselectronics told Ruptly, RT’s video agency.

Roselectronics believes the lightweight and flexible material can be used to protect armored vehicles, missile systems and warplanes. According to its creators, the material is unique in its ability to absorb radio-electronic signals and interfere with the distribution of electronic traces.

If you follow my writing regularly, you already know that I have written extensively about a future conflict with Russia.

At one time the doctrine of “mutually assured destruction” applied, but at this point things have changed dramatically.

Russian military theorists have spent a lot of time studying how to fight and win a nuclear war, and now they have the technological edge to potentially be able to do it.

Sadly, these kinds of articles tend to get less attention than many of my other articles because people simply do not understand the threat we are facing, and by the time they do it will likely be way too late.

2 thoughts on “Is Russia About To Invade Ukraine?”