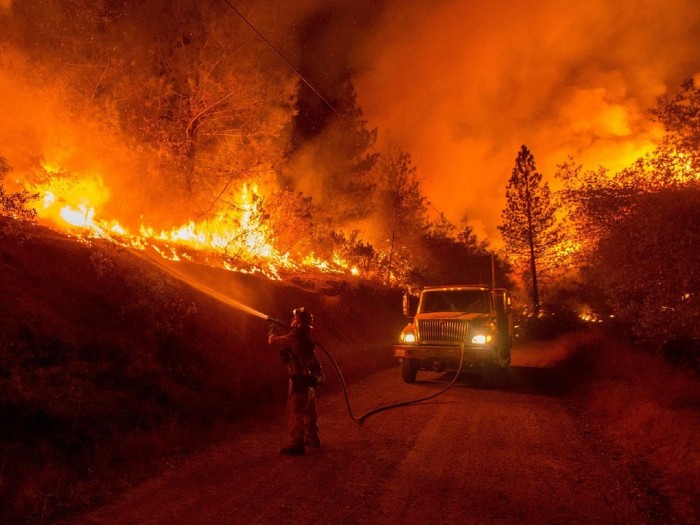 As you read this article, the state of California is being ravaged by gigantic wildfires that are raging wildly out of control, and West Virginia is dealing with a “500 year flood”. Since last September, the U.S. has been hit by a series of 11 historic floods. Never before in American history have we seen so many major floods within such a compressed space of time. And just as the Shemitah year ended last September, massive wildfires began erupting all over the country. Thanks to that unprecedented outbreak of large fires, 2015 ended up being the worst year for wildfires in all of U.S. history. And since 2016 began, things have continued to get worse. As far as the total number of acres burned is concerned, we are more than a million acres ahead of the pace that was set last year. So why in the world is all of this happening?

The wildfires that are ripping through many parts of California right now are making headlines all over the world. In particular, the extremely quick moving Erskine fire in Kern County has already destroyed more than 200 homes and authorities are picking through the rubble hoping that they won’t discover too many bodies…

The charred remains of two people were found inside a burned down mobile home which went up in flames as the fire tore through the South Lake area of Sierra Nevada, officials said.

The bodies were so horrifically burned that a forensic investigation is required to determine whether they belonged to a human or animal, said Kern County Sheriff spokesman Ray Pruitt.

Officials warned that more residents may be forced to flee the advancing flames as the fire has already scorched more than 30,000 acres.

At this point more than 1,000 firefighters are fighting this enormous fire, and it has already burned more than 35,000 acres. The latest update that I saw said that it was now “10 percent contained”, and high temperatures in central California are expected to hit 110 degrees by mid-week.

Meanwhile, West Virginia is dealing with a “500 year flood” after it received approximately a quarter of its entire average annual rainfall in a single day.

The Elk River has already broken a record that has stood since 1888, and the Governor of West Virginia has declared a state of emergency for 44 of the 55 counties in the state.

According to Greenbrier County Sheriff Jan Cahill, the amount of damage that has already been done is unlike anything that has ever seen before…

At least 24 people have died and crews are still searching for missing residents in West Virginia after heavy rains flooded several towns. A federal disaster has been declared for this devastating event that has been described as “complete chaos.”

Unfortunately, the worst is not over for West Virginia.

In fact, the state is about to get a whole lot more rain. The following comes from the Daily Mail…

West Virginia is expected to be hit by another barrage of heavy rain and flood waters in the next 24 hours.

The National Weather Service in Charleston has issued a flash flood watch for 22 counties tomorrow, warning that heavy rain could cause streams to burst their banks.

Around 18,000 people are currently languishing without electricity three days after the floods wiped away entire neighborhoods, killing at least 26.

As the floodwaters receded today, some returned to find their homes, businesses and entire neighborhoods swept away by the devastating weather.

If you follow my work closely, then you know that this is just the latest in a truly bizarre series of unprecedented floods that have been striking all over the nation over the past 10 months.

June: Extremely heavy rain caused the Brazos River in Texas to hit its highest level “in more than a century“, and many parts of Houston found themselves under water yet once again. According to CNN, this was “the second year in a row that Texas has been hit by 500-year floods”…

Are you starting to see the trend?

There have always been floods, but never before has the United States been hit by so many major floods within such a compressed space of time.

So what is causing all of this?

Why is the U.S. being hit by record wildfires and record flooding simultaneously?

I think that it is interesting to note that our sun has become extremely quiet. Our sun has more influence over our weather than any other natural cause, and right now it is completely spotless…

For the second time this month, the sun has gone completely blank. On June 4th, the sun went completely spotless for the first time since 2011 and that quiet spell lasted for about 4 days. Sunspot regions then reappeared for the next few weeks on a sporadic basis, but are once again completely missing from the surface of the sun. The blank sun is a sign that the next solar minimum is approaching and there will be an increasing number of spotless days over the next few years. At first, the blankness will stretch for just a few days at a time, then it’ll continue for weeks at a time, and finally it should last for months at a time when the sunspot cycle reaches its nadir. The next solar minimum phase is expected to take place around 2019 or 2020. The current solar cycle is the 24th since 1755 when extensive recording of solar sunspot activity began and is the weakest in more than a century with the fewest sunspots since cycle 14 peaked in February 1906.

Could that help explain why all of this weird activity is going on, or is there something more taking place?

In my new book, I warn that we are moving into a time that many have described as “a perfect storm”. Our weather is getting crazy, the ground underneath our feet is shaking with frightening regularity, our economic and financial systems are crumbling, and there is political instability all over the planet.

A great shaking is coming, and yet most people are completely oblivious to what is happening and they are going to be completely blindsided by it.

But those that are wise understand the times, and they will thrive even in the midst of all the chaos and darkness that are coming.