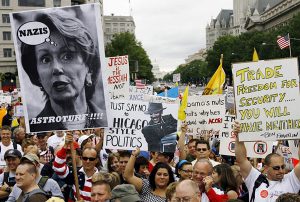 A massive sea of humanity descended on Washington D.C. on Saturday to protest Barack Obama’s policies and America’s march towards socialism.  In fact, the Daily Mail is reporting that the crowd may have been as large as two million people.

According to Jerome Corsi, Barack Obama has “rebranded” the Security and Prosperity Partnership of North America as the “North American Leaders Summit” in order to make it appear less controversial.

It has been discovered that Kevin Jennings, appointed by Barack Obama to the position of assistant deputy secretary for the office of Safe & Drug Free Schools in the U.S. Department of Education,  once said this about promoting the gay agenda in schools: “If the radical right can succeed in portraying us as preying on children, we will lose.”

Dr. Marc Girard, a highly regarded authority on the side effects of drugs and a medical expert commissioned by French courts, has said on French television that the swine flu vaccine could cause as many as 60,000 deaths in France – especially among young people, children and pregnant women.

Health and Human Services Secretary Kathleen Sebelius told George Stephanopoulos that the swine flu vaccine will be available in the United States by the first week of October, 2 weeks earlier than previously expected.

A Coptic Christian church in Egypt was apparently firebombed by Islamic radicals.  Why did the news media not cover this?

A former head of Pakistan’s intelligence service says that the United States seeks to establish new military bases in Pakistan in order to keep that country destabilized and to control its nuclear weapons.

According to a stunning new report from the inspector general of the Department of Justice, rape and sexual abuse of inmates by staff members in U.S. federal prisons has doubled over the last eight years.

It looks like ALL public libraries in Philadelphia will be closing for good at the beginning of October.

One scientist has a startling new theory that “time” is literally starting to disappear from the universe.

One highly regarded financial expert says that the U.S. economy is experiencing “death by a thousand cuts”.

Approximately 60 percent of Canadians are living paycheck to paycheck.

Thousands of schoolgirls have suffered serious adverse reactions to a controversial cervical cancer vaccine promoted by the U.K. government.

Lastly, a major U.K. newspaper is asking this very controversial question: “Has Osama Bin Laden been dead for seven years – and are the U.S. and Britain covering it up to continue war on terror?”