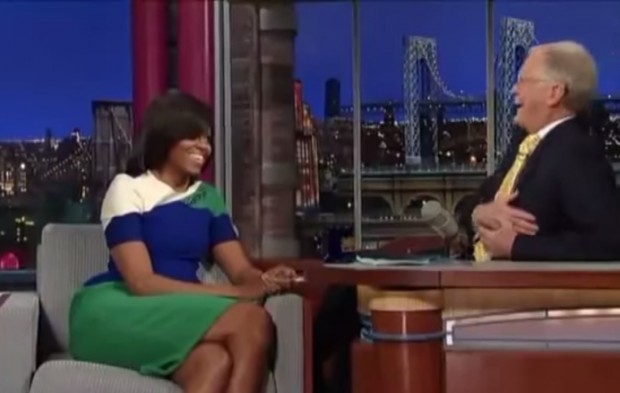 Appearing on “Late Show” with David Letterman in 2013, First Lady Michelle Obama also told the story of how a woman once asked her for help getting something off a shelf. It’s the same story she told in a recent interview with People magazine, in which she seemingly suggested race played a role in the woman’s solicitation of her assistance.

However, her story seemingly lacked the racial undertones when she told it to Letterman last year.

“I went to Target. I thought I was undercover. I have to tell you something about this trip though,” she said. “No one knew that was me because a woman actually walked up to me, right, I was in the detergent isle and she said — I kid you not — she said, ‘excuse me, I just have to ask you something.’ And I thought, ‘cover’s blown.’ She said, ‘Can you reach on that shelf and hand me the detergent?’ I kid you not!”

Then she added some context.

“And the only thing she said — I reached up because she was short — and I reached up and pulled it down and she said, ‘Well, you didn’t have to make it look so easy.’ That was interaction, I feel so good. She had no idea who I was.”