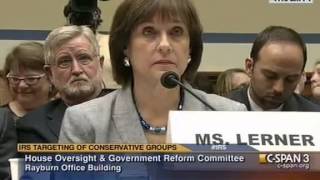 In that Nov. 9, 2012 email, Lerner further suggests that conservatives will ruin the country: “So we don’t  need to worry about alien teRrorists (sic). It’s our own crazies that will take us down,” she wrote.

Camp (R-Mich.) told Holder the email “shows that Ms. Lerner’s mistreatment of conservative groups was driven by her personal hostility toward conservatives.”

1 thought on “New Emails: Lois Lerner Referred to Conservatives as ‘***holes’ and ‘TeRrorists’”